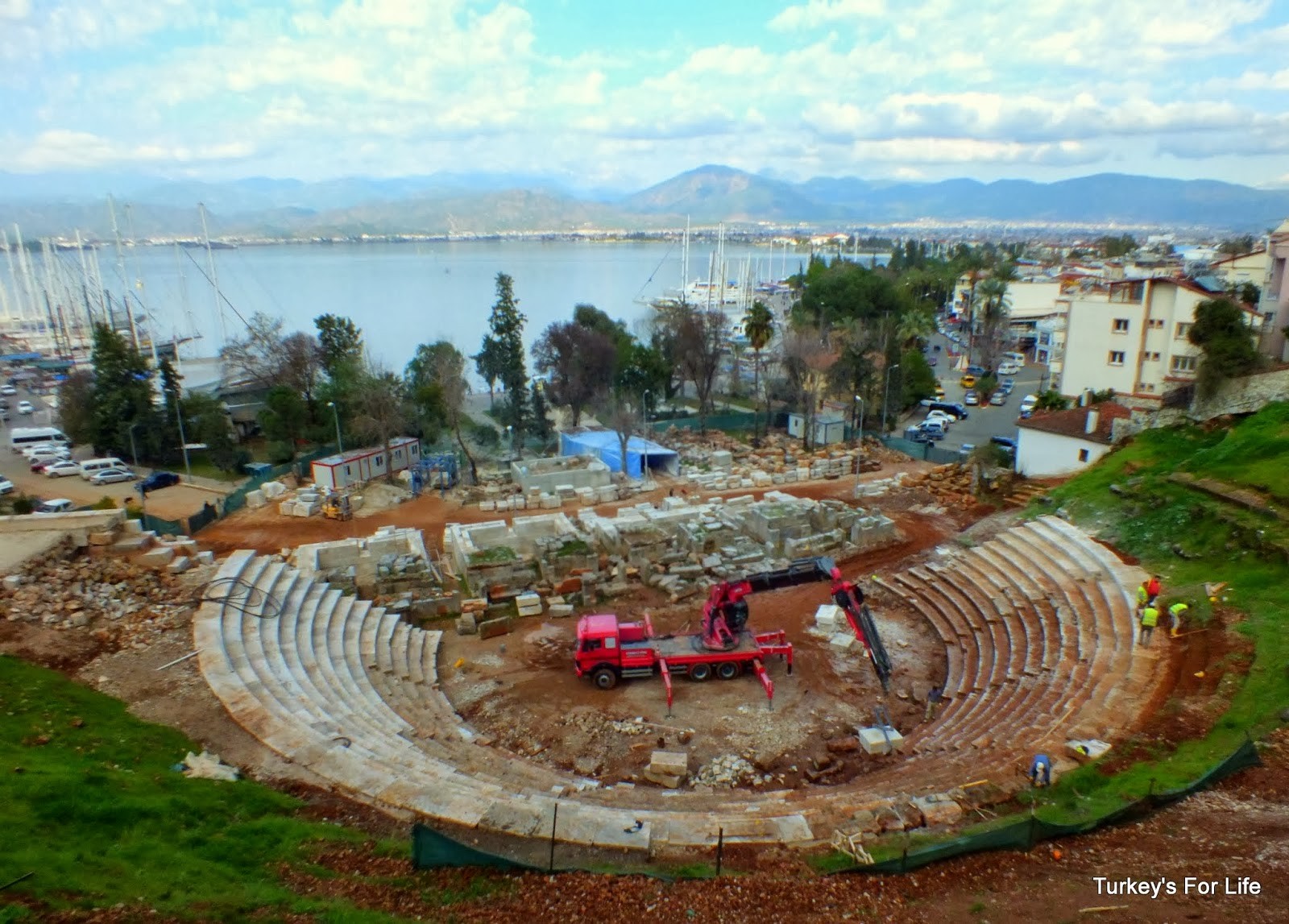 Something a bit different for 2014 for the blog. There are lots of goings on in Fethiye – and in our life – that either never make it into a post or we have to squash them in somewhere at the expense of another post.

So we’ve decided, once a month…or so…(in our usual haphazard way) we’ll put a few things together in one post just to give you a general picture of daily happenings and a little reminder of what we’ve been up to as well.

As you know, we’ve followed the restoration of Telmessos Theatre in the centre of Fethiye quite closely. For months, as the restoration team painstakingly chiselled away at the new stone by hand, it looked as though nothing was happening.

Well, a few days ago, we went for another wander around the perimeter walls to see what, if anything, had visibly changed.

The projected completion time for the restoration is September of this year, and, as you can see, it’s really starting to take shape now. Original stone has been cleaned up and replaced, and new stone has been added…and we have ourselves a theatre.

Still a long way to go, obviously, but exciting to see the more complete semicircle. You can see the difference from last time we took photos of Telmessos Theatre from the perimeter walls.

Changes to the canal running through Çalış are continuing at pace and workers are now widening the route where the Çalış water taxi station is.

This photo is a few days old now and the scene looks different again. If you come to this area of Turkey for your holidays, it’s going to look a bit different when you arrive, that’s for sure.

On the opposite side of the bridge, the stone walling is already in place and, beyond this canal, as the sea begins, Ördek Adası (Duck Island) and all its birdlife is now just to your left.

Projects galore in Fethiye, then – and the football club is no different.

Two of the stands are now covered with a roof and, on both occasions, the construction team have worked through awful weather to get them completed in time for upcoming matches.

This is maraton stand. The stand opposite is almost complete – there’s only so much you can get done in wind, rain, thunder and lightning – and it’s amazing how far the construction team got before they ran out of time for last night’s match. But not to worry, we sit/stand in maraton.

And, last night, as the rain teemed from the sky, we all packed into the stadium regardless to watch Fethiyespor draw against Samsunspor.

After a disastrous start to the season, Fethiye now has a football team that is unbeaten in the last seven matches and they’re slowly climbing away from the relegation zone. Let’s see…

Well, we like eating! This month, we’ve tried two new (for us) places in Fethiye and can recommend both of them. We already have, in fact. If you missed them, we tried out Anacığım for a fish in bread and we also went to Saklıbahçe Cafe. We were told the köfte is good at Saklıbahçe and a friend has been since and has told us that indeed the köfte – and the real chips to go with it – are very good!

So, that’s four ongoing Fethiye projects all wrapped up, at least for a short while, anyway. As we said above, we’ll keep doing little updates like this every so often – but you can also “Like” our Facebook page for more updates and photos. Hope to see you there.