Imagine if a city was a person with real thoughts and feelings; we think of cities like this all the time because they’re such complex beings.

There’s always so much more to discover than what you first come face to face with on that initial greeting. Over time, you get to know each other and sometimes you become close friends so that you want to spend more time together, discovering more of each other’s secrets with each visit.

Some cities, you just don’t hit it off with straight away – but even with those, we keep going back to them, because, well, we might just have missed something. 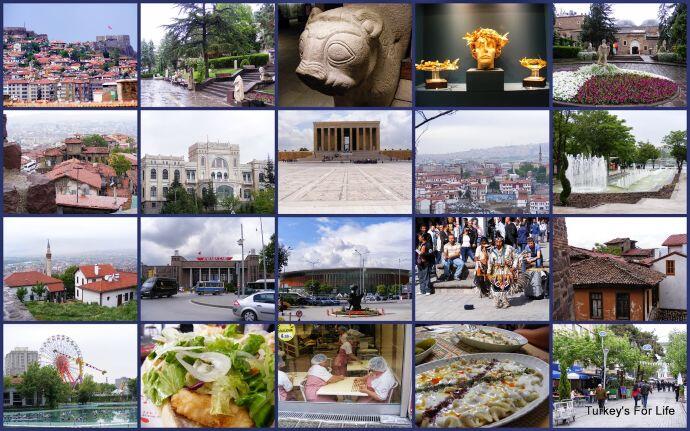 Just some of the scenes around Ankara

So Where Are We At With Ankara?

Defensive, is where we’re at with Ankara. Ankara made us want to stick up for it a little; its feelings take a constant bashing because, as the capital of Turkey, well it probably doesn’t even make the ranks of second fiddle to Istanbul in the eyes of the traveller.

It isn’t even considered for the itinerary by many visitors to Turkey. Well, with the draw of Istanbul, hot air balloons floating over Cappadocia, paragliding over the lagoon of Ölüdeniz and visiting the wonder that is Ephesus, that’s Turkey done and dusted for most visitors.

And that’s certainly not a slight at those visitors – there’s only so much you can do and see in a short space of time, and Turkey is jam packed with ‘must sees.’ (We even compete for a bit of the visitor’s time with our own Fethiye Must Sees page.)

But what they all have in common is the fact that they always seem to top the tourists lists above Turkey’s capital city. Ankara’s got a lot of competition. 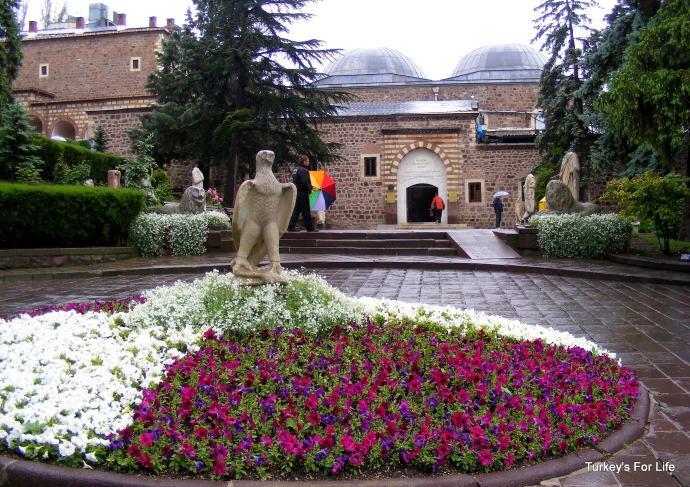 The Ankara Museum Of Anatolian Civilisations

But that doesn’t mean there’s no reason to go there. We’re only at that initial greeting stage with Ankara – we’ve met just the once, for three days – but we left with a good feeling; good enough for us to want to go back again and get acquainted with each other a little better.

We haven’t got an Aya Sofya to show you or a Süleymaniye Camii. But we have got the award winning Museum of Anatolian Civilisations whose exhibits are arranged in old Ottoman buildings dating back to the 1460s.

If you’re resident in Turkey and have a Müze Kart, entrance to the museum is free. 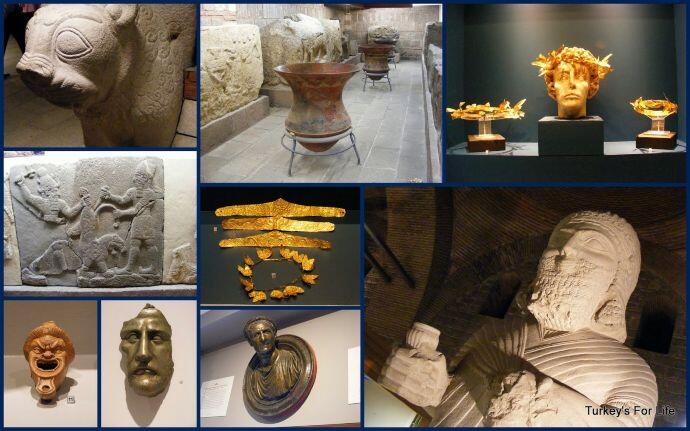 Hittite and Roman artefacts on display

And the Hittite section of the museum is just something else. We’re familiar with Roman, Hellenistic and Lycian findings in our little Fethiye corner of Turkey, so the Hittite findings were a whole new area of interest for us.

The museum isn’t so big as to start making you feel guilty for getting a bit bored with staring into glass displays – and, when you come back outside, if you so wish (we recommend it), you can go for a wander around Eski Ankara and the castle which are just a few minutes walk away.

That was the only time we had in the Atpazarı neighbourhood of Ankara, but the little bazaars tucked down alleyways and the brown signposts pointing out various areas of interest told us we’re not done here just yet. 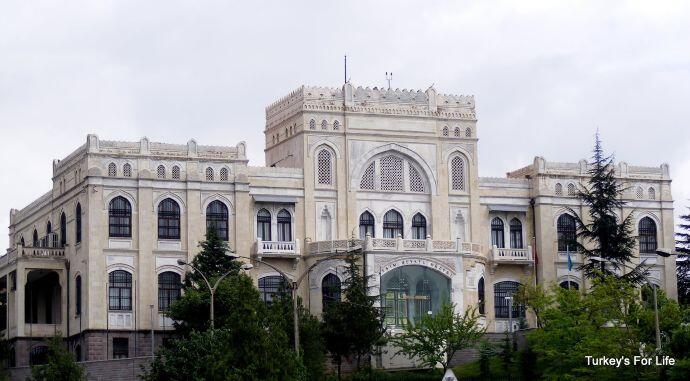 The Art and Sculpture Museum

And we can’t tell you all the streets are quaint and pretty. Ankara is Turkey’s second largest city; it’s got huge, busy roads…but as you’re walking along the pathways of those huge busy roads, you see grand buildings like this; the Resim ve Heykel Müzesi or State Art and Sculpture Museum.

This is the building that houses, restores and preserves some of Turkey’s most precious and finest artworks – but we didn’t have time to go in and take a look! 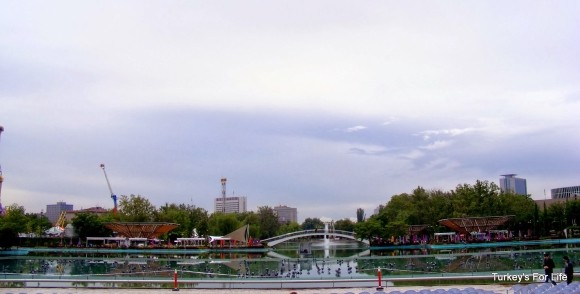 There are some great, cheap eats to be had in Ankara. We’ve already written about our lunch of ciğer şiş and an evening meal of Kayseri Mantısı. We ate various balık ekmek (different seafoods in bread). We visited Gençlik Parkı (above) which was accidentally apt seeing as we were there around Gençlik Bayramı (Youth Festival).

Again, we can’t tell you Genclik Parkı is quaint and pretty but it’s a huge open space, the theatre overlooks the water, and the water is full of fountains that no doubt perform some sort of fountain show judging by the rows of seating areas around the water’s edge.

There’s also a fairground in here, too – but we left that for Ankara’s youth to enjoy. 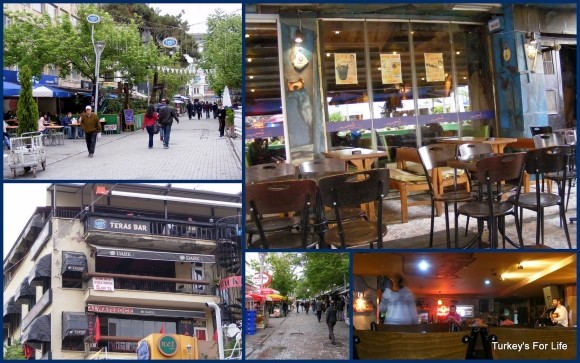 And in Kızılay, we found a great live music and bar scene – quality live music performances in the middle of the afternoon. When you’ve been wandering around, exploring a city in the rain for a few hours, parking yourself in a warm bar with live music, knowing your hostel is just up the road – that’s a nice feeling.

And there are more than enough customers for these bars; Ankara has no shortage of students or office workers who were popping in and out of these places with regularity. The students tended to be in the bars in groups, lending a bit of support to their friend who was playing the live music on stage. 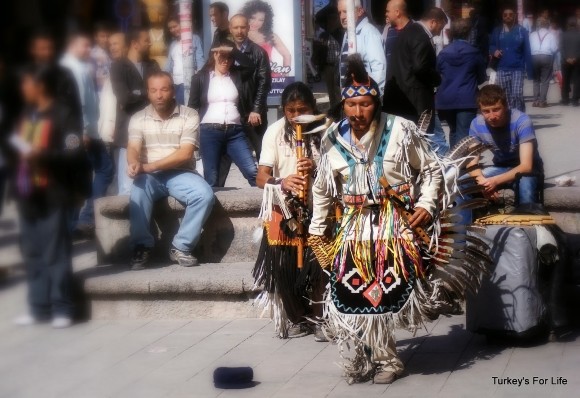 And where else, but in a city, do you get random scenes like this in the middle of the street? Wonder if they managed to sell any CDs…

People said that to us about Ankara. Now, imagine if Ankara was a real person with real thoughts and feelings. Ouch!

We’ve always wanted to give Ankara a bit of our time since moving to Turkey. It took us a while, but we finally got there – and we’re really glad we did. We’ll definitely be dropping by again sometime…

If you fancy a visit, then check our city hotel page to find the best rates on rooms in Ankara

People living in Ankara -including me- always complain about having nothing to do in this city. Actually, there is something as you said very well, and I felt that I had to do write something to tell people what they can do instead of spending weekends at shopping malls with kids, and here is what I came up with (it's in Turkish, but something might be understood by looking at the pictures): As the number of the visitors to the blog boomed because of this post, I realised that people had been desperately seeking what they could do, so I needed to publish a second list, which is also in Turkish: Actually, the mourning is mostly caused by the fact that there is no sea here (and I agree), but as I said while ending the first post, we are not fish anyway...

Ha ha, no we're not fish, Özlem :) Maybe Ankara could do the same as Kent Park in Eskişehir and build a 'beach and sea' so you can all pretend to be near the sea. :)

I love Ankara! Ulus is wonderful to wander around in and the city is really old as well as big. Good food in all kinds of neighborhoods. Lovely people!

Nice to meet another Ankara fan in that case, then. :)