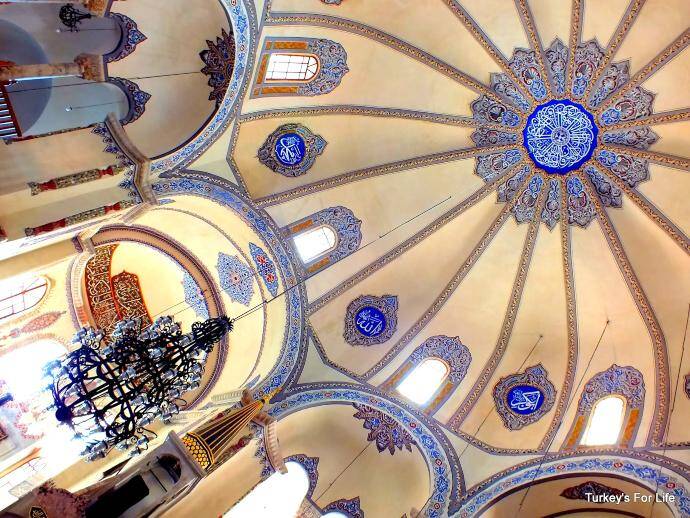 How many times have we stayed in Sultanahmet in Istanbul?

Let us count. How many times have we been to Istanbul?

(Picture a hand waving around in the air in an I’ve-lost-count-and-have-better-things-to-do-with-my-time-so-don’t-ask kind of way.)

And here we are, just over four years into our blogging life, just about to tell you about our first ever visit to Küçük Ayasofya Camii in Sultanahmet.

Well, these things take time. We’re not the sort of travellers who run around, bagging sites and ticking them off as we go along.

But then we do know we have the luxury of being able to take our time with Istanbul.

On our last visit in November, we stayed at the Mangana Konak Suites which is situated on the Marmara seaside of Sultanahmet.

Barry had run the Istanbul marathon the day before and was (understandably) struggling to walk too far.

So what to do?

Küçük Ayasofya Camii is just down the road from the Mangana Konak Suites, so we decided he’d be okay hobbling strolling that far.

And it gets its name because the shape of the building resembles its world famous namesake, Aya Sofya (Hagia Sophia).

Its original name was Church of the Saints Sergius and Bacchus.

And, in a way, it’s a shame really that when it became a mosque in the 1500s, its name became Küçük Ayasofya Camii.

Almost as if this building is a smaller, second best to the grander version just up the road.

Because, according to more recent work by historians, despite both buildings being built in the 520s and 530s AD, it’s now thought that Küçük Ayasofya wasn’t built as a ‘practice run’ for Aya Sofya, as was originally thought.

Whereas Aya Sofya’s interior blows you away with awe and wonder, Küçük Ayasofya has a more comforting, peaceful feeling.

Küçük Ayasofya is a working mosque, a place of worship.

Visitors are welcome, but not too many visitors come here because Küçük Ayasofya is a bit tucked away from the centre of Sultanahmet.

It’s calm and tranquil around here.

A street lined with arty shops and small cafes and Istanbul’s oldest surviving Byzantine structure, just sitting there, kind of sad and lonely. You wonder where everyone is.

Küçük Ayasofya has seen a lot over the centuries – it’s a wonder she’s still standing so we can still visit today in the 21st century.

The building has been on UNESCO’s watch list for endangered monuments for a long time.

And it is also one of the historic buildings that gives Istanbul its World Heritage status.

We never saw the original interior.

No doubt the mosaics and frescoes were a similar style to other Byzantine churches (Istanbul’s Kariye Museum is the best example and not to be missed).

Küçük Ayasofya underwent extensive repairs and restoration and has only reopened in the last seven or eight years.

What you see today is whitewashed walls and warm blue intricate paintwork.

If you come to Küçük Ayasofya Camii for mosaics or the distinctive blue Ottoman tiles that adorn other Istanbul mosques, you’re going to be disappointed.

But if you come here for a bit of peace and tranquility and a knowing that you are in Istanbul’s oldest surviving Byzantine building, then Küçük Ayasofya Camii feels comforting and grateful for your presence.

We spent some time in the mosque and, for most of it, apart from the guardian, we were the only people in there.

Another couple and a small tour group joined us at one point but we outstayed them.

Not that this is a big building with lots to see. It was just a nice place to be for a while.

And, while the guardian of the mosque left us alone to wander, he was waiting at the bottom of the stairs as we descended, ready to leave…right by the donation box.

You know, just in case we wanted to leave a little donation on our way out. We did.

Outside, the little courtyard was just as deserted – just this Istanbul cat taking advantage of the leaking tap around the ablutions area.