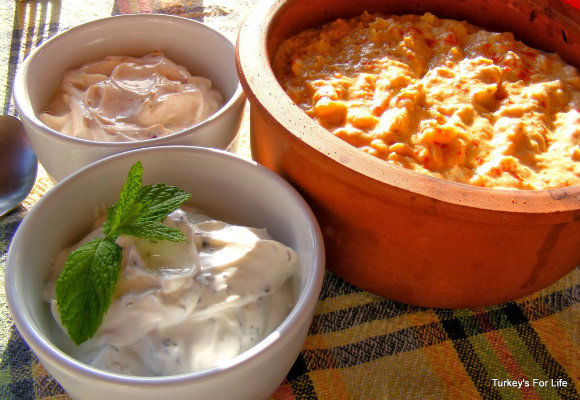 Life in Turkey doesn’t happen without yoghurt. Even as a foreigner when you first move here, if you don’t like yoghurt, it’s not like you can just pretend it doesn’t exist.

Rather, you’re more likely to be spending your time trying to avoid it – and that’s going to take up quite a lot of your time if you’re out and about a lot.

Because yoghurt is everywhere.

We didn’t particularly dislike yoghurt; it was just a case of, “What’s all the fuss about?”

Well these days, it’s a rarity there isn’t a big tub of süzme yoghurt from the market in the fridge.

We dollop it onto the side of most dishes, we mix it into meals, and we also whip up quick meze dishes with it.

For this post, we’ve got a couple of quick yoghurt-based meze recipes for you, and, as with lots of others we’ve mentioned, these are perfect summer meze dishes for your barbecue.

Yes, we know it’s not summer yet but we’ve had / are having a very mild winter. We’re enjoying outdoor eating and we’re going minty and spicy for these mezes.

And if we’re doing a barbecue, we need a simple salad. A shepherd’s salad goes so well with barbecued food and yoghurt meze.

We prepare our yoghurt for both dishes first – and this is all done in minutes.

We used to wonder why, when we went to friends’ houses for meals or to certain restaurants, the yoghurt dishes often tasted slightly different to the ones we made at home; more rich and smooth.

Well, this is why:

As usual, quantities are haphazard here – it’s down to your own taste.

Generally, if we’re doing a barbecue, we’ll roughly divide 500g of süzme yoghurt three ways: a third of it will remain plain and the other two thirds can be added to a bowl ready to make your two meze dishes.

We’re going to be making a classic haydari meze – we challenge you to find a Turkish restaurant that doesn’t have haydari as part of its meze display.

Haydari is just a fact of life in Turkey.

And we’re also going to be making a chilli yoghurt. Now, this is just one of those dishes that is an essential for us.

When we first came to Fethiye on holiday in 1998, we were taken to Cin Bal in Kayaköy by our new found friends.

At the time, Cin Bal was nothing more than a shed with sheep hanging up – obviously, we wondered what the heck we’d come to and left all the ordering to them.

This was one of the yoghurts that arrived – it was a first introduction to a world where yoghurt wasn’t over-sweetened strawberry flavour – and we just fell in love with it.

We still order it to this day – and we make it for our own barbecues, too.

And that’s it. Two quick Turkish recipes made from yoghurt – haydari and chilli yoghurt.

You can drizzle extra olive oil over the top of your haydari before serving if you’re feeling indulgent.

Add the dishes to the rest of your meze collection (if you want to make that yummy looking hummus in the photo, click here to see our recipe for hummus), barbecue your meat, dress your salad and…