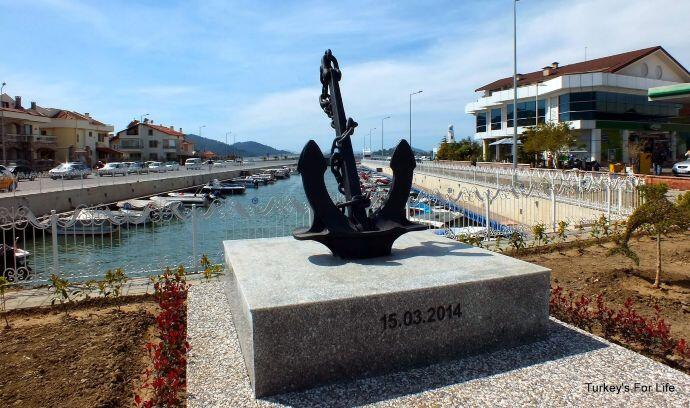 Wow, these monthly Fethiye updates seem to come round quickly. So it’s almost the end of March and Spring has definitely sprung.

Gardens are being planted up, bars and restaurants that have been closed for the winter are being cleaned and painted.

And the usual Fethiye sounds of March ring in your ears wherever you roam. That’s drills, sanders and angle grinders.

Add to that a coating of bright yellow-green pine pollen that settles over anything in its path and that’s Spring in Fethiye for you.

March saw the official opening of the new marina where Fethiye’s new ‘lighthouse’ feature was on full display.

As with many ‘official openings’ in Turkey, of course, the area is still not finished and work has continued since then.

This marble-mounted anchor is the latest addition and the gardens around are being landscaped.

As for the lighthouse, amongst other plans, that’s displaying an artist’s impression of the recreation area for the land opposite the state hospital in Çalış.

Well, not so much refurbishments as rebuilding.

Work on what was Shaka continues into the night on most days.

They seem to be going for a cosy brick wall look rather than the open glass look that was there previously and decking has been laid outside.

Fethiye in February update we posted a photo of the black mesh surrounding this place.

This is what was Kardelen, the restaurant between Shaka and Matisse.

Well, it looks like this now and we’re still none the wiser. It will no doubt be some type of eatery. But the shape and structure is intriguing us.

Sure we’ll find out what it’s going to be. All in good time…

Well, no photo for this post because things look pretty much the same as they did in February.

We’re going down there later today because we’ve seen there’s a structure going up where the Çalış Water Taxi booking point was.

If you “Like” our Turkey’s For Life Facebook page, we’ll be posting photos on there as and when – so keep an eye out.

Obviously, we’ll update on here, too, when we get the chance.

Well, the temperatures are on an upward trend so we posted two meze recipes: our version of coleslaw – yummy in a jacket potato – and a tasty spinach stem salad.

And, as for eating Fethiye, March was the month we finally wrote about Şato Piliç at Mozaik Bahçe Restaurant. It’s a favourite for us on their menu.

We have lots of Turkish recipes on the blog and also lots of suggestions for where to eat and drink in Fethiye.

Fethiyespor celebrated their 81st birthday this month on the 23rd.

There was a gathering in front of the Atatürk statue at Beşkaza Meydanı to commemorate it, but the first team were not present as they were playing away in Kahramanmaraş.

Thankfully, they celebrated their birthday with a much needed 3-1 win.

If you’re pondering whether to go along or not, then do go. They need big support for this one.

Important local elections will take place all over Turkey on Sunday.

Let’s see what next month has in store…