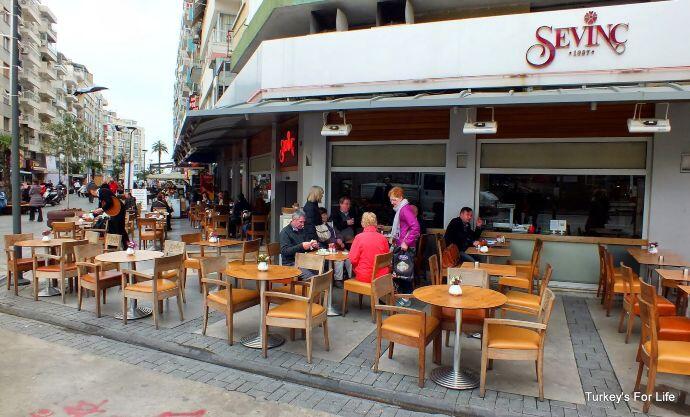 Anyone who visits Harrogate is always told they must go to Betty’s Cafe & Tea Rooms. When we visited Harrogate, we dutifully took ourselves off to said tea rooms.

Can’t tell you if it was a pleasant surprise or a disappointment because it was an age ago, but I do remember wondering why these places become so famous; tea rooms, fish and chip shops, a bakery in the middle of nowhere. Can one place really be that good that it becomes so famous?

And all of this was pre-internet days – but we all knew about these random places that we just had to go to should we happen to be in the area.

Anyway, why am I rambling about this? Well, because it’s the same the world over – and sometimes, even if you’re really not that bothered about going to one of these famous places, there’s something inside you, niggling…niggling…are we missing out on something if we don’t go there. Are we just being stubborn by not going?

And, in the end, your curiosity (and those annoying go-on-you-know-you-want-to inner voices) get the better of you and you give in and you go. Such was the case with Sevinç Pastanesi in Izmir’s Alsancak area (think cake, coffee, tea shop).

When we got our Izmir Must Sees & Dos from friends the first time we went, Turkish coffee heated in the cup, over coals (fincanda pişen Türk kahvesi) was a must. Midye dolma was a must. Asansör was a must.

Are we? Ohhh nooo, don’t make us come back with a we-didn’t-make-it-there apology. Because we, Barry and Julia, haven’t got a sweet tooth. We don’t do ‘cake cafes.’ They don’t excite us, and even if it’s the best cake shop in the world, it’s not going to make us drool in any way.

And so, the first time we went to Izmir, we casually walked by Sevinç. And there has been that niggle ever since.

But on our most recent visit to Izmir in early March, as we walked by in the early afternoon, we stopped. It wouldn’t hurt to have a coffee or something.

So we sat down and waited for one of the crisp white shirted, black bow-tied waiters to come and take our order. Two cappuccinos, please.

And then we sat and looked around us.

We’re in the heart of Alsancak on a busy corner and Sevinç Pastanesi has been here since 1957. It’s an Izmir institution, a meeting hub, a place to drink stylishly presented Turkish coffee (we wished we’d ordered that when we saw it), to drink çay – and eat sweety things.

Everyone in Izmir, and everyone who knows Izmir, knows Sevinç. But, for us, there was another highlight – this is prime people-watching territory!

And the people intrigued us. Because Sevinç is a tourist hotspot – more so than we had envisaged. We’re not so well up on the Izmir city centre tourist scene; people arrive on huge cruise ships and are whisked off to other places (Ephesus and the like) on coaches.

Some of those tourists opt to wander the city. But on the day we were at Sevinç, it was a chilly March day and it was packed with English tourists (they had left when I took these photos). We’ll admit to a bit of half-listening. They only had so long before they had to get back on the buses. Buses. Buses from where? A hotel? Or were they on an Aegean tour? All very curious…

And this is what made us realise how famous Sevinç is. This wasn’t an organised let’s-take-these-tourists-to-Sevinç trip. They’d ambled here of their own accord. Someone from their tour had obviously done the well-of-course-you’re-all-going-to-go-to-Sevinç thing – and on this day, they all did.

They bought famous Sevinç cakes and baklava and sipped Turkish coffee and wandered inside to take photos.

Sevinç Pastanesi is to Izmir what Betty’s is to Harrogate. And lest you go thinking it’s a tourist trap; it’s not. It’s packed with Izmirli, too. Us; we’re glad we’ve been now. Wouldn’t have minded a few chocolate/coffee sprinkles on top of my cappuccino but hey, we got a chocolate love heart.

And would we go back? Ohh, we really are the wrong people to ask that question to. Ask any Izmirli (person from Izmir), ask anyone who knows Izmir who likes the sweeter things in life, and they’ll all no doubt say, “Well of course, you’ll go to Sevinç.”

We’ll say, if you’re in Izmir, whether you like sweet foods or not, go to Sevinç. It’s better that way. You won’t feel like you’ve missed out.