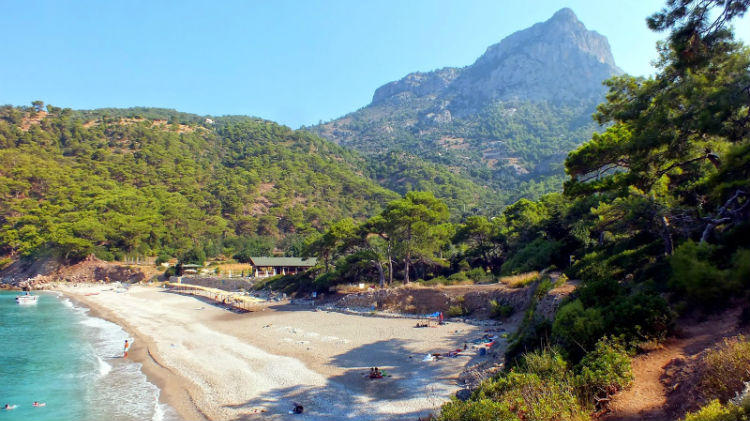 Kabak has been a part of our life for a long time. But it’s definitely fair to say that, since around 2012, the area’s kind of taken hold of us.

We’ve fallen for it in an even bigger way.

If we’re to look back to try and pinpoint why we’ve got such an affection for here, it’s probably got to be when we went to stay overnight at the Olive Garden in Kabak.

We used to go camping a lot in the Lake District when we were living in England.

And that special kind of camping night-time-quietness; that’s what comes back to us when we stay in Kabak.

Every year, we go and stay over in Kabak, just to escape and chill out.

One time, we decided to stay at sea level, in the bay, at Chakra Beach, to take it all in.

And, because we were itching to sample one of the circular bungalows, too.

We did, and they’re great. But let’s get back to Kabak.

For years, those of a more bohemian persuasion have chosen this tiny bay as a base, using the steep, rocky footpath to get down to the beach.

Some stay in the camps teetering on the edge of the hillside and others will just crash out on the beach; their guitars resting next to them.

It’s that type of place.

A Bit Of Beach Life, Kabak-Style

After our evening meal at Chakra, we too lay on the beach for a while, looking up at the stars, before we hit our real bed.

It’s easy to see why people stay on beaches – we almost fell asleep there, too.

Our little bungalow was the next best thing though.

We left the skylight above us wide open, closed the mosquito net around the bed – not that we saw any mosquitoes – no fan, no air conditioning, and we just slept so soundly.

Even in this, the height of summer, the night air gets cooler and, at some point around 4 or 5 in the morning, we pulled the sheets over us for more snuggly slumber.

Breakfast at around 8:30 am and then we went for a stroll to the beach and around a short stretch of pathway.

We’re deeper into Lycian Way territory here, beyond the Ovacık to Faralya stretch, and there are also waymarkers for other footpaths, too.

We’ll come back to hike around some of those one day and add them to our list of walks in the Fethiye area.

But, for now, these photos are taken from a small stretch of path along the bay.

The sea looks deceptively calm, particularly in the photo above, and we intended to go for a swim after our walk.

The waves in Kabak bay are strong and the pebbles and boulders plentiful – right at that point where you need to teeter into the water.

I’m not good at teetering, or at getting out of the water gracefully, afterwards.

The day before, the sea had been very calm. So I at least got to enjoy it then.

Back To The ‘Metropolis’

The first moments of arriving back to Fethiye, even after just one night in Kabak, feel like you’ve stumbled into a sprawling metropolis the size of Istanbul.

Kabak is a tiny kabak-shaped(1) world, away from all of that.

Of course, things are changing.

That’s evident from the scores of visitors’ cars parked into any type of suitable (and unsuitable) nooks and crannies along the roadside at the top of the hill.

And from the new camps that are appearing around the hillsides.

For us though, we just hope Kabak can remain a little oasis of tree house rooms, camps and a beach.