Wow, don’t we just make a fabulous job of getting side tracked on this blog! One minute we’re taking you to East Turkey, the next minute we’re eating meze at a restaurant in Dalyan and allowing our addiction to Kabak to take hold; and that’s in between writing about daily life in Fethiye – such as checking out Erasta shopping centre, trying new foods and sharing Turkish recipes, reading and writing a book review of Ayşe’s Trail…and, before we know it, we’ve still not told you about the last stop of our road trip along the north shore of the wonder that is Lake Van.

Of course, all of this journey was undertaken last year – lest you go thinking we’ve made the long journey back eastwards. No, it was simply a case of waking up this morning and thinking, “Today is the day to write about the east again.” So that’s what we’re doing…

So, our first stop was Adilcevaz; home of an Ottoman mosque thought to be the creation of Mimar Sinan of Süleymaniye Camii fame (amongst other mosques). This is debatable – but the mosque and its setting, right on the shores of Lake Van, are nonetheless worth a bit of your time. We just loved the views.

From there, we continued westwards along the lake to Ahlat, home of the vast graveyard of 13th century tombstones. If you remember from that post, we had that place all to ourselves…right up until we were spotted by two very knowledgeable local kids. From then on, we had a guide whether we wanted one or not. Ahh, the joys of tourism. 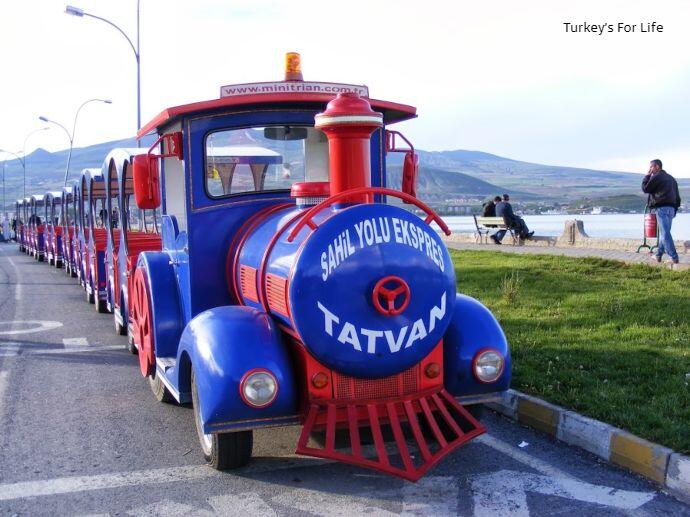 Tatvan is a railway town – and a minirail town

And, even when we arrived in the large town of Tatvan, we were still very much ‘noticed.’ This area of Turkey does see foreign tourists like us…it’s just that we’re very few and far between.

So it’s not a ‘being noticed’ of the hello-yes-please-I-am-here-would-you-like-a-boat-trip variety, but a whoa-look-two-foreigners-in-town variety. A pause, a stare for a second longer than usual, a nudge to a friend. Rarely a hello (unless it was kids).

Shyness? Not sure, but nothing we experienced was ever unfriendly. Quite the opposite, in fact. But people were genuinely curious about us – and that feeling of being very visible…it’s an odd one. Not unpleasant. Just odd. 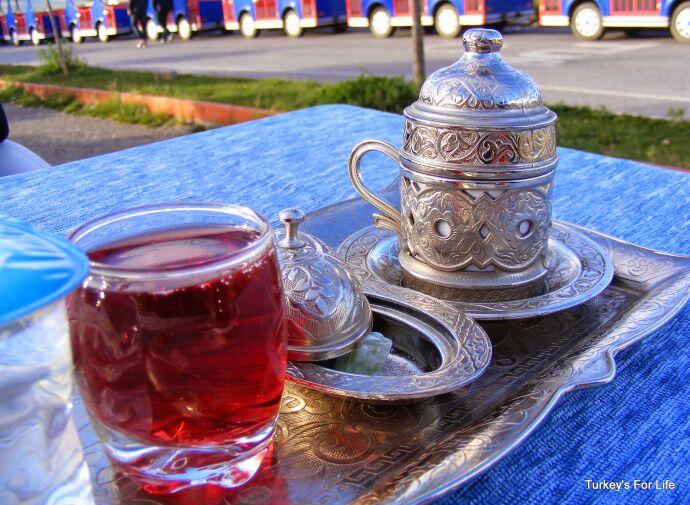 But anyway, back to Tatvan. We’re right on the west shore of Lake Van here and our friend explains that people around here call the lake ‘Van Sea.’

You can see why; a stretch of turquoise water that stretches beyond the horizon, a promenade, jetties, a little shuttle train plying the length of the promenade on one side and the row of cafes and picnic areas on the opposite side.

Tatvan is one of the places around Van Gölü where people come to chill out and enjoy their surroundings. There is definitely a seaside feel to the place.

We walk along the promenade and take a seat at one of the cafes for a çay and a Turkish coffee. Everywhere we visited while we were in the east, Turkish coffee was served with water (that’s the norm) but also a small glass of fruit juice, too. Our Turkish friend had no idea why – but hey, it makes a for a longer drink so who’s complaining? 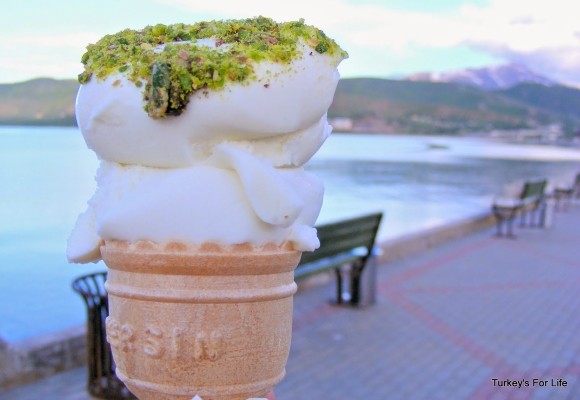 Eating ice cream by the ‘seaside’ in Tatvan

And if you can’t beat ’em, join ’em. The sun was lowering in the sky, and the air was becoming quite crisp and chilled, but the seaside-town-vibe was still very much there. 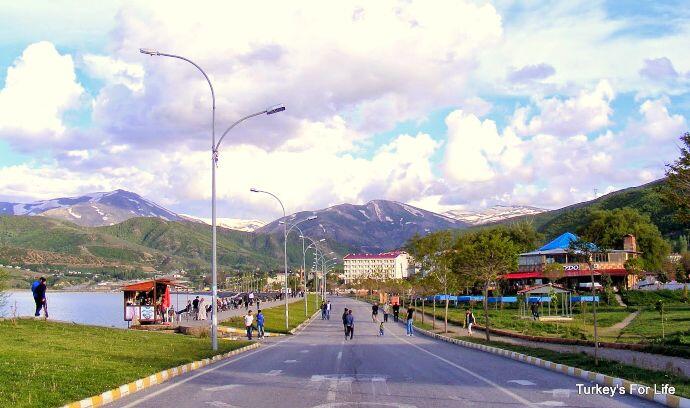 There’s a seaside feel to Tatvan

The east of Turkey is wild, vast and beautiful…once you get out of the towns and cities. Tatvan is a smart-looking modern town with chain stores and coffee shops and the seaside feel along the lake shore.

It’s also a railway town; the final stop for the Van Gölü Express, the train we were supposed to take from Ankara to to the east. Tatvan should have been the first place we set foot-on-land in the east of Turkey. Instead, we had to take the Doğu Express from Ankara to Kars, getting off at Erzurum, much further north.

Things must happen for a reason because that just means we got to see a little more of eastern Turkey (see photos in the last link just above) and we still got to see so much of the areas surrounding Van Gölü.

And yes, we’ve still got tales from the east we want to tell you. Wonder when we’ll be tel 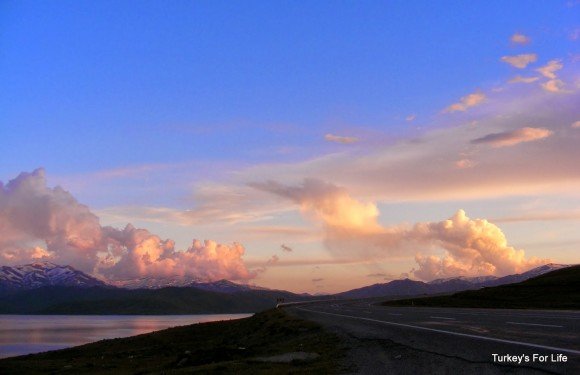 Sunset over Van Lake on the way back from Tatvan

ling them… But for now, it’s time to drive back to Patnos from Tatvan. A chore?

How can driving along the shore of Van Gölü at sunset ever be a chore? In our next post about our east Turkey adventures, we’ll be sailing on this lake…

I love reading your posts about Eastern Turkey, such an intriguing place. The landscape photo - the mountains, the clouds, the lake, the long road - it's just how I picture this part of the world.

East Turkey's a great place for exploration and yes, when you do a road trip, most places look like this. :)

. . another place that it's time to go back to - last time we were there it was dull and dreary and rather sorry for itself - we were glad to get awaw.

We were only there for a couple of hours or so and I wouldn't think Tatvan is your ideal place. Nice for us for a stop off. :)

i thought the ice-cream was a statue. Fits in with the train.

My attempt at photographing ice cream with a view of the mountains of Tatvan. ;)