(Update 2017: If you want a bit more luxury, Sultan Camp now also has deluxe bungalows with en suite bathrooms. There are also tents for hire if you want to be ‘under canvas.’)k

We love staying at Olive Garden, Chakra Beach and Tree Houses in Kabak – but, this time, we thought we’d go to one of the originals. And also one of the cheapest – Sultan Camp. Budget and all that…

It’s become a bit of an annual thing now; disappearing off to Kabak for the night for Barry’s birthday. Well, it all works out well. Friends over to visit Fethiye for their summer holidays mean regular get-togethers anyway, so by the time his birthday comes around, towards the end of July, a midsummer chill out night away is more than welcome.

A Night At Sultan Camp Kabak

We first went to Kabak – just for a wander and a nosy for the day, back in the early 2000s. It was late October and we hiked down the hillside, and sat on the beach for a while; the only people there. Rather than take in the immense beauty and solitude, I was already thinking about the hike back up the hill and not particularly relishing the thought. 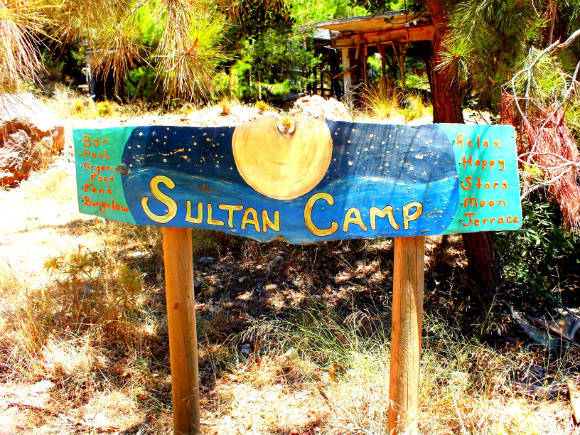 These days, you can see camps dotted about all over the hillside, but, back then, there were just a handful. As we set off back up the hill to get to the car, we came across Sultan Camp. They were open, they had a bar, we were already out of breath and thirsty. A happy, welcome sight and therefore a pit stop.

We’ve walked past Sultan Camp many times since, over the years so, this year, we thought we’d make a return visit. We’d include an overnight stay – just to see if it was how we remembered from that first pit stop.

Situated about a quarter of the way up the hillside, Sultan Camp was the third camp to be built in Kabak and you can really see that when you’re there. On the day we went, we had lunch at the Olive Garden and then hiked down the hill from there. The problem with that route is, the path leads you directly to sea level. We were baking in the sun, covered in dust, and now had to head back upwards for a short distance to get to Sultan Camp. 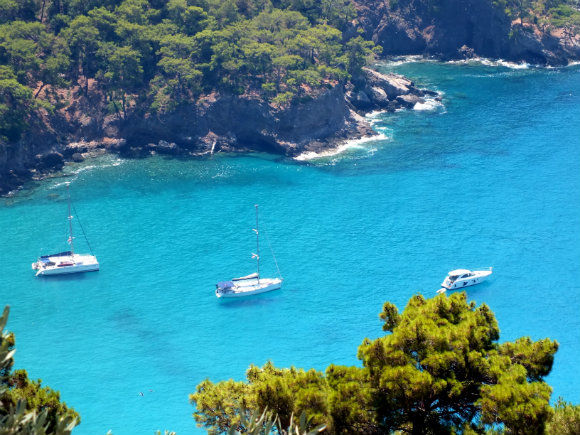 Apart from the brightly painted Sultan Camp signpost, you could walk straight past Sultan Camp quite easily. It’s a little wooden secret, almost camouflaged amongst the banana plants, bougainvillea, olive trees, vines and pine trees. It’s all mature growth so that, when you enter – glorious shade! Oh, how grateful we were to find ourselves under a ‘roof’ of foliage; a guy standing behind the bar evidently expecting us. 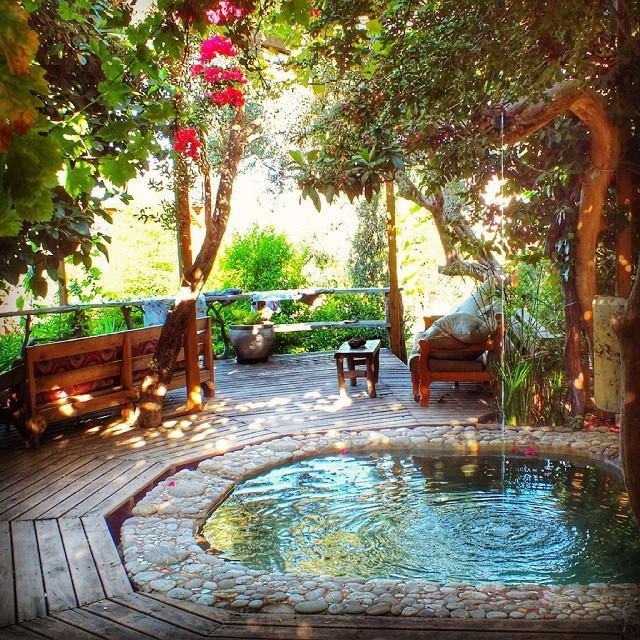 “You must be Barry and Julia.”

“Welcome. Shall I take you to your bungalow now or do you want a drink first?”

Away From It All

Well, you can guess what our answer to that was! Sultan Camp is run by a friend of a friend so communication had happened, evidently, which meant they were waiting for us. And no doubt they knew we’d be ready for a drink on arrival! Cushioned seating, a cold beer, the sound of the water trickling into the plunge pool next to us, people swinging gently in hammocks, engrossed in their reading. And the rest of the world immediately feels a million miles away. 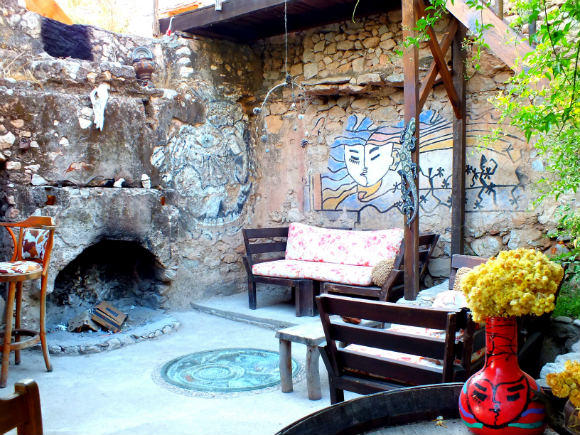 Kabak isn’t a once-you’ve-been-to-one-camp-you’ve-been-to-them-all type of place. Each one has its own atmosphere and Sultan Camp has stuck to its camp site feel. There are seating areas, people come here to pitch their tents, there are bungalows; some with bathroom and some without.

That means people queue in the morning to use (very clean) loos, showers, sinks for teeth cleaning. Some people don’t bother using their tents or bungalows, at all, and sleep on the terraces under the stars.

That’s the sort of place Sultan Camp is. If you love a bit of camping, with your breakfast and evening meal thrown in, too, you could lose yourself in Sultan Camp for a good few days. 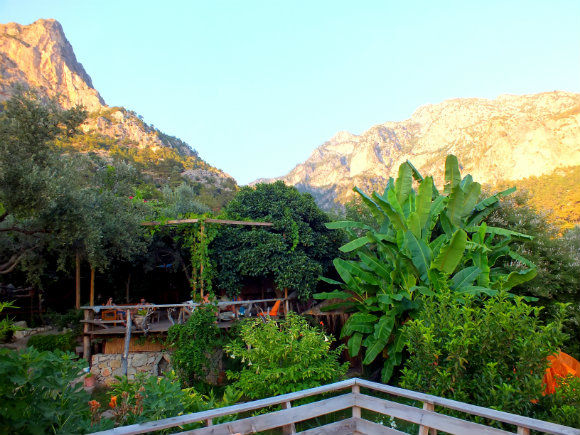 Terraces and seating areas are almost camouflaged by foliage

Our bungalow was great – if you like camping. A small wooden cabin, light, bed and mosquito net. That’s it. And that’s all we need. Kabak, for us, is enjoying outdoors and cool night air. There was an open square where a window could be but there was just a piece of material there, acting as a curtain to protect privacy.

Once the music from another camp had finished at midnight all we could hear were the waves crashing a few hundred metres away. Footsteps and low-voiced mumblings of other guests going to their bungalows. Tent zips opening and the rustle of their occupants climbing inside and the chirping of crickets! Wonderful!

There wasn’t even a fan in our Sultan Camp bungalow. It’s not necessary. In fact, half way through the night, we needed to pull the sheets over us. It’s so lovely and cool around here. And then it was an early wake up and off to breakfast.

At Sultan Camp, meal times and general set up are a similar to other camps in Kabak – a self service buffet. And we’re talking Turkish food here. It just lends itself so well to this type of service, so you’re not going to be eating rubbish. At both evening meal and breakfast there was a range of dishes – mainly vegetable dishes but there were meat options, too.

Breakfast was the typical Turkish breakfast array of cheeses, tomatoes, cucumber, olives, boiled eggs. But there was also a range of jams, honey, cake – and menemen with chopped sucuk. It’s the sort of breakfast to set you up for the day ahead! 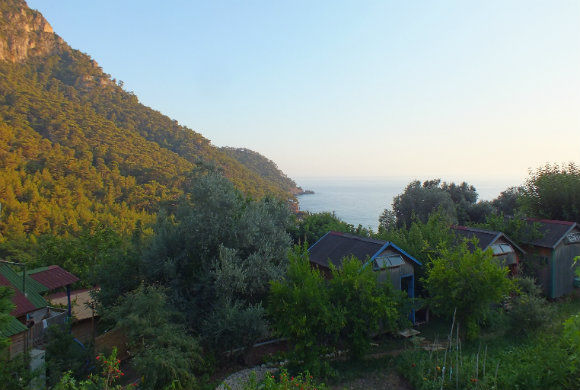 Sorry To Dash Off

Just as well really because we needed to get back to Fethiye pretty sharpish to meet Barry’s mum. Even though it was still early, it was already hot. We paid our debts to Sultan Camp, bid them goodbye and went off to wait for the shuttle service to the top of the hill. A power cut meant we couldn’t pay with debit card, so, after paying cash, we had just enough money left to get home and get the shuttle bus. But only if there were a few others waiting, too.

The shuttle service works like the traditional dolmuş system. The driver wants 50 TL minimum to take everyone to the top of the hill. Therefore, the more people waiting, the cheaper it becomes. We really needed it to become cheaper. Fortunately, a few other campers in Kabak needed an early exit, too, so by the time the dolmuş arrived, there was more than 10 of us waiting and we all paid the minimum 5 TL fee. Phew!

Moral of the story – Kabak has regular power cuts so make sure you have enough cash on you to be able to function! We had to pay cash at both Olive Garden and Sultan Camp due to power cuts on both days.

How fun to have such a great annual tradition. This is such a cool spot. :-)

Great that Kabak is so close to us as well, Krista...even though you feel like you're a million miles away. :)

Looks so peaceful and relaxing guys! What a wonderful way to spend Barry's birthday! I'm alright traditional camping for a day or two, but then I'd like to have a proper shower...at home or a hotel. ;)

Ha ha, these places in Kabak are great. You can go more upmarket if you want and 'camp' in more glamorous fashion but this was just for the night and we wanted to chill out. So peaceful around here. :)

I've only tried camping in Turkey once (by the Black Sea), where there wasn't any shade. But this looks just perfect.

Ohh, would love to camp by the Black Sea, Mette...in the shade of course. No shortage of shade at Sultan Camp and we were VERY grateful for it. :)

. . now that even appeals to this antisocial/anti-concrete boffer!

A good few of the places in Kabak would be your sort of place, Alan. Definitely Sultan Camp. :)

This looks like a laid back place where well behaved doggies would be allowed to stay.

Sultan Camp is very laid back @BacktoBodrum, an there is a very cute Sultan Camp dog, too. Might be worth asking. :)