So there we were, sat in Cafe Park Teras, and we were just chatting to owner, Tayfun, about different places we like to eat around Fethiye.

“Köfteci İmadettin. Can’t believe you don’t know that. It’s legendary. It’s been there since I was a kid. You get köfte ekmek and it’s spicy and they serve it open with lettuce and tomato. And – everyone knows Köfteci İmadettin.”

How on earth do you live in town the size of Fethiye for 11 years and not know about a köfte place that is supposed to be legendary? Well, we’ve managed it, it seems! 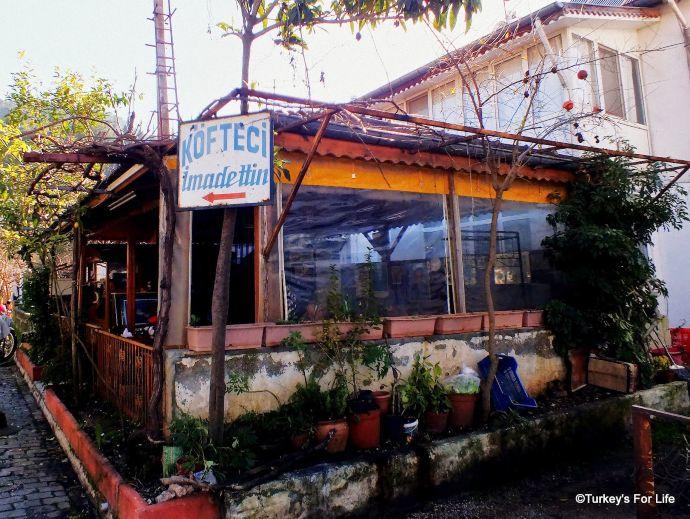 You know us; we’re suckers for a good köfte ekmek, so of course we needed to go and hunt out this Köfteci İmadettin. But not until we’d asked a couple more friends the have-you-heard-of-Köfteci-İmadettin question. And when the reply from both was, “Everyone’s heard of Köfteci İmadettin,” you just wonder where you’ve been for the last 11 years.

Is That Praise, Or Not?

That was about as far as we got with the other two friends. Not quite as enthusiastic as Tayfun, then, but we were already sold. Tayfun had told us where Köfteci İmadettin is – and we wondered how we’d never noticed it. Granted, it’s tucked down a side street in the centre of Fethiye, but still…11 years and we didn’t know about it? Exasperation!

We needed to put that right. Saturday, the sun shining…a little stroll into town for a cheap köfte ekmek lunch sounded just perfect. 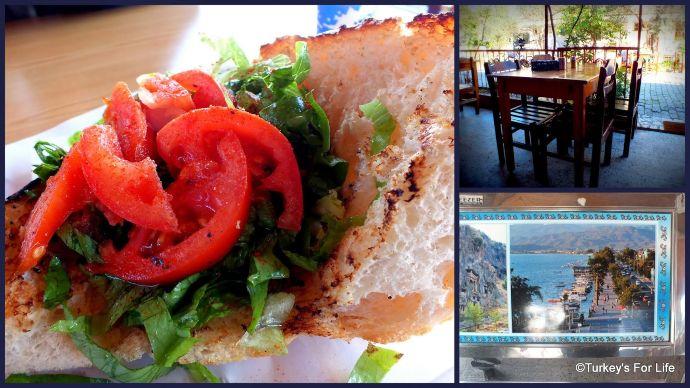 Köfteci Imadettin is an institution

So off we went. It was busy! Maybe we were the only people in Fethiye not to know about this place. We sat down and ordered our köfte ekmek and an ayran. And we can be quite picky when it comes to köfte ekmek – we’ve sampled more than a few in our time. It arrived within minutes. And it was indeed a piece of paper with an open, toasted ekmek filled with grilled köfte, shredded lettuce and chopped tomato. We sprinkled more chilli powder over the top.

Verdict: A köfte ekmek at Fethiyespor is very decent (match day food’s always a winner though) and we have other favourites elsewhere, like köfte piyaz in Antalya (albeit, served on pide bread). But none of those options are in Fethiye town centre. Köfteci İmadettin is; and we now have a new go-to to add to our we-fancy-a-cheap-snack places. We were full and it was tasty! And we do like to think we know what we’re looking for in our köfte ekmek…

We Recognise That Photo

And Barry knew what he was looking for, too, when he started laughing and shaking his head.
“What are you laughing at?”
“Turn round and look at the fridge,” he said.

Yes. We didn’t know about Köfteci İmadettin’s famous köfte but there, in their little establishment, stuck to the fridge, is a Turkey’s For Life photo. It even still says ‘Turkey’s For Life’ in the bottom corner. And, guess what? The photo is taken from Cafe Park Teras; Tayfun’s bar. Now, there’s a little coincidence for you. Guess we were destined to go to Köfteci İmadettin one day.

Yeah, you can't be surprised by much you see in Fethiye. :)

Fate, destiny, call it what you will. Your name was on the fridge door.

Just typical that someone had helped themselves to a photo to make a fridge cover. Got to smile. :)

Now you have me craving for a kofte ekmek, and there aren't that many real Turkish restaurants around here. Unless there's something I've been missing ;)

Köfte ekmek is so simple but just so lovely isn't it, Mette? Ha ha, yes, there could be one lurking somewhere! :)