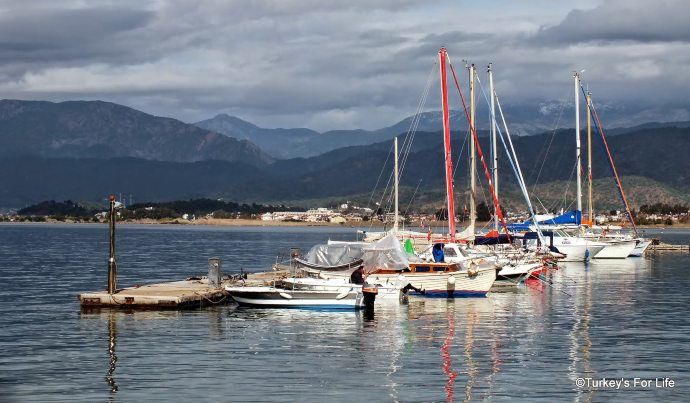 Already, it’s the end of the first month of 2015 and, as with last year, we’re going to continue with our monthly Fethiye news roundups. These will be a little recap of what we’ve been up to throughout the month – but they’ll also include little bits and bobs of goings on that otherwise might not make it into these posts.

So, let’s get cracking and see what’s been happening in our not-so-little town over the last few weeks…

This one is a curiosity for us. When the wooden and iron buildings along Phase 2 of Fethiye harbour were erected, they looked really good…really good but not very practical with not a lot of indoor space.

Anyway, of course we needn’t have bothered about that because people moved in, hammered, chiselled, constructed walls, knocked down walls etc, and what we see today is a row of busy restaurants.

But this one always remained empty (apart from one of the units being used as a kiosk for a very short-lived ‘amusement area’ on the vast space at the front). A few months ago, workmen arrived and began the customary knocking down of dividing walls and a Turkish pide oven was built.

Oh, exciting times…and then they disappeared again and all was still.

Recently, however, workmen have returned, black mesh has been placed all the way along the open front – and the sound of drills, hammers and angle grinders is once again ringing from the inside. New restaurant for the start of the 2015 summer season? Well, let’s see…

And remember the famous leaning apartment blocks that lined the edge of Beşkaza Meydanı (Fethiye town square)? Well, they are no more. We assumed the whole row would be going, and that’s apparently still in the pipeline, but, for now, just the block that was really leaning has gone.

This is the view from the side street looking through the gap towards the square and the sea. And as usual, let’s see…

It’s no understatement to say the weather in Fethiye has not been the best in 2015. But, on the sunny days we have had, we’ve made the most of them – and we managed a drive up the mountains to the snow in Kırkpınar before dropping back down to Üzümlü.

We also enjoyed topping up the photo collection by getting a few photos of Gemiler Bay.

On our Facebook page, we also share posts from previous day trips we’ve done, and, this month, we shared our post about the drive from Ölüdeniz to Kabak, just to dizzy ourselves once more with the stupendous views of the mountains and the Mediterranean glistening below us.

Fethiyespor – One Win Flips The Mood

It’s not so much a roller coaster ride being a Fethiyespor supporter, it’s more like being strapped to reverse bungee jump apparatus. One day, it’s the depths of despair and this-is-not-how-it’s-supposed-to-be and everyone should resign (you know the script), and that’s what it was like just over a week ago.

And then, last Sunday, Fethiyespor go and win away against Ofspor. A tough match. Lots of new players. But we win 1-0. Whoop whoop, happy days and we’re catapulted into the air of adrenalin-filled, ‘let’s-do-this’ highs.

Tomorrow, with yet more new signings this week, Fethiyespor play bottom place Tavşanlı Linyitspor at Fethiye. We’re predicting a good crowd, and, as we’re still on a positive high, of course we’re predicting a win!

Well, January was the month we discovered a legendary place in Fethiye. A place that is special to the hearts of many Fethiyeli because it’s been around for so long. Friends of ours used to go there as kids…and we’ve only just found out about it. Amazing!

You can read more here about Köfteci İmadettin. In our own kitchen, we made yoghurt-topped pasta bake.

We’ve already touched on this above, but it’s been so mixed and wet this month that we even did a post about the January weather in Fethiye. Parts of Koca Çalış have been under water for some time, and floods elsewhere along the coast have caused landslides and blocked roads. Fethiye has got off relatively lightly.

The photo above was taken while I was out power walking yesterday. Even when the sun is out, the clouds look foreboding. Same again today…but full sunshine for tomorrow, apparently. That will be welcome!