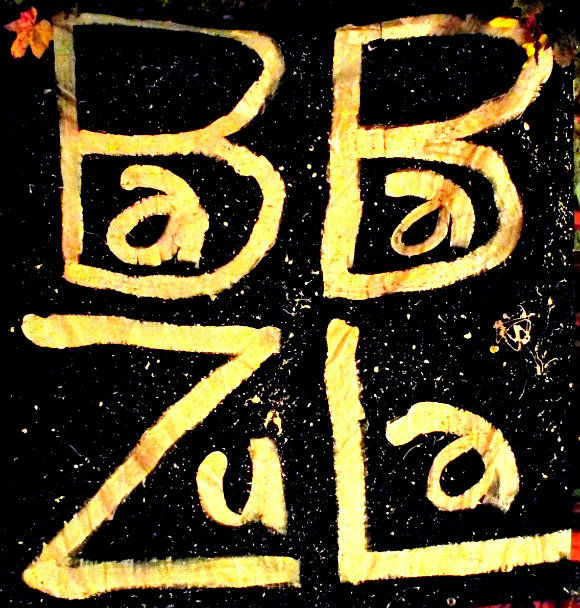 Hmm, I think we can well and truly say, Fethiye is definitely on the music map of Turkey, these days.

These days, however, all that has changed and, especially through summer, there’s usually a musical event going on somewhere that really takes our fancy.

For the atmosphere and types of music we like, places like Nena Sahne in Kabak and Kaya Art Camp in Kayaköy have regular live music events.

Even Buzz Beach Bar in Ölüdeniz got in on the act a few weeks ago with a fantastic jazz concert by Elif Çağlar.

And then a couple of weeks ago, we were staying at Sultan Camp in Kabak for Barry’s birthday. As we hiked down the hillside after a lunch at the Olive Garden, we spotted this on a tree…

Baba Zula in Fethiye! Aaaarrggh, we’ve gotta go to this.

Except they were playing in Kabak at Nena Sahne. We’d need to get there and back.

Staying over wasn’t an option – that would get too pricey with entry fee, too.

But Baba Zula are one of our favourite bands. They’ve played in Fethiye in the past but we couldn’t make it.

We didn’t want to miss them again…so it was one to ponder. There’s usually ‘a way’ in Fethiye.

Never say never and all that…

And, well, the music gods were smiling down on us for this occasion.

Just as we were pushing Baba Zula to the back of our minds because Kabak just wasn’t going to happen for us, a poster appeared in the window of Deep Blue Bar, of all places.

Dolmuş to Kayaköy and worry about getting home afterwards…Kaya’s not quite so distant as Kabak…if worst came to worst, we could set off walking back to Fethiye and jump in a taxi closer to home.

So, we bought tickets!

We’ve watched our other favourite Turkish band, Duman, three times now (and nearly got stuck in Muğla in the process for one of those gigs) but Baba Zula was going to be a first.

A completely different set up to Duman, Baba Zula’s music is…well, we’ll just tell you how they describe their music on their Twitter bio:

And that really is a perfect description for them.

We first came across Baba Zula in the Turkish music documentary, “Crossing The Bridge: The Sound of Istanbul.”

We’ve mentioned this film so many times on the the blog and we’re doing it again!

If you’re any sort of appreciator of music and want to learn more about Istanbul and it’s music scene, you’ve got to get your hands on Crossing The Bridge.

In the documentary, narrator and German musician, Alexander Hacke, joins Baba Zula and Canadian singer of Turkish folk songs, Brenna MacCrimmon on a boat on the Bosphorus. And they play music.

The documentary is directed by award winning Fatih Akin and the scenes and the sounds in that section of the film – just mesmerising. Shivers down the spine.

Anyway, Baba Zula played that very track at Roots so we just had to record it – just for memories and all that.

And the rest of the night was just fantastic, really.

The bar at Roots was doing a roaring trade as Baba Zula did their first track and then wondered why everyone was stood so far back – why were we all so far back?

We were all beckoned forward, up to the stage. You can’t beat an up close and personal, intimate gig…

Especially when the band climb down from the stage and play amongst the crowd, too.

Roots is where Poseidon used to be and is a newcomer as a venue for the Fethiye music scene.

It’s not strictly speaking the first time we’ve been to Roots for live music because this is where Scott Jeffers and Los Vagabundos played for Kaya Fest back in April.

But the bar / restaurant hadn’t had its official opening at that stage and we didn’t know they were going to be a music venue in the future.

And how did we get home? Ahh, you see, there’s always ‘a way’ in Fethiye.

Our vague plan was to get a taxi up to Hisarönü and jump on the last Ölüdeniz to Fethiye dolmuş at 2am.

However, a tap on our shoulders in the early stages of the gig – our Deep Blue Bar friends had decided to come along, too, at the last minute.

Yeahy, we got a lift all the way back home!

The morning after, feeling a tad worse for wear but still on a bit of a high from the night before, we tweeted a ‘thanks for a great night’ to the official Baba Zula English account.

This is why we love social media, you see. They followed us back on Twitter and replied. Easily pleased?

Yeah, we probably are, but who cares, eh?

All good fun and little things like this definitely cement future support. We can’t wait to bump into one of their future gigs again.

And, if you ever spot a poster in the street advertising one of their performances and you’re in town on that date, make sure you go along.