In Turkish cuisine, there are groups of dishes where a particular type of sauce or pastry might be used as the base, but then the fillings can vary. Olive oil dishes are an example of this – on the blog, we’ve got a recipe for okra in olive oil, or you can make green beans in olive oil and barbunya pilaki (borlotti beans in olive oil).

Another type of dish common on the Turkish table is the ‘ekşili’ dish and, as cooler weather slowly approaches and we’re starting to think about more comfort foods, we’ve been playing about with this tangy-on-the-tongue sour sauce. ‘Ekşi’ means ‘sour’ and any dish containing this sauce becomes ‘ekşili.’

Perhaps the most common dish in this range is ekşili köfte and we loved to order this when we ate at Yeşil Asma Yaprağı in the Dispanser area of Fethiye.

Sadly, Yeşil Asma Yaprağı has now closed, but their ekşi sauce was a thinner version of the one we’re going to be using in this recipe – it just depends which type of texture you want and how comforting you want your dish to be.

This ekşili tavuk çorbası recipe is perfect for when you’re feeling a bit under the weather. What better comfort food than a bowl of hot soup and, as anyone in Turkey will tell you, chicken soup is just about the best for combating any feverish aches and pains and general lethargy.

As we’ve been feeling a bit that way, recently, and as we’ve been playing around with sour sauce dishes, we thought we’d combine the two and rustle up this Turkish sour chicken soup recipe.

In Turkish villages, it’s common to boil chicken – sometimes whole chickens – for quite some time because the village chickens can produce quite tough, chewy meat. So, for this sour chicken soup recipe, as it’s the chicken stock that’s supposed to do you the world of good, we decided to use butterflied chicken thighs, skin and bones left in place.

As it’ll be simmering on the hob for around an hour or so, once the soup is ready, the chicken will fall away from the bone and the skin and you can remove them at the end of cooking.

A word about “Turkish saffron” – We will be using a small pinch of this in our recipe. Real saffron is made from crocus stamens, and, when you see “Turkish saffron” on the markets, you will be amazed at how cheap it is.

This is because it is a plant that resembles saffron but it is actually safflower. Safflower is still good for cooking with in its own right, creating oils and adding extra flavour and the slightly orange colouring to your soup.

Remember, we want our Turkish sour chicken soup to be comforting – our bodies are starting to feel a bit autumnal now – so a quick exploration of the fridge and cupboards lead to a find of carrots, green beans and potatoes. All of those are going into this ekşili tavuk çorbası.

And where does the sour (ekşili) bit come into it? We’re going to be using lots of fresh lemon juice.

Mmm, now doesn’t that just look like perfect comfort food for when the body isn’t feeling right up there at 100%? We are just in love with this sauce – thick and wholesome, yet refreshingly tangy at the same time.

So let’s get cracking. Let’s find out how to make sour chicken soup… 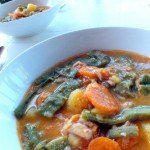 And there you have it – a yummy Turkish sour chicken soup recipe that’s packed with flavour and extra vegetables. Our soup made 4 servings because, as you can see in the photos, we made our broth quite thick.

You can serve your ekşili tavuk çorbası with fresh crusty bread or, if you’re like us and have packed your soup with seasonal vegetables, it will fill you up enough if you eat it as it is.