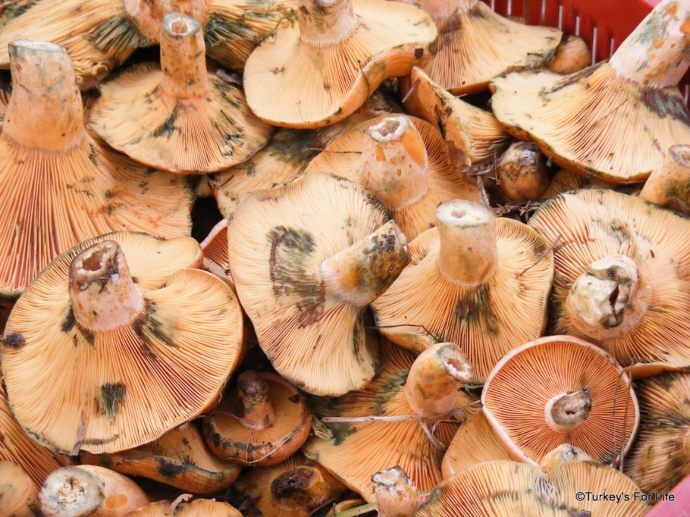 These days, even at the local markets around Turkey, it’s possible to eat some fruits and vegetables year-round without having to worry about them going out of season.

Yes, some months will be more bountiful than others – and prices will fluctuate occasionally – but those foods are the staples of our kitchen and we always know they will be on a market stall somewhere in Fethiye.

Mercifully, though, there are always edibles which are completely seasonal. Those foods that appear for only one or two months each year and we get excited about their arrival, buy them up in bulk when they do finally appear…and then try to come up with recipes to make the most of the bounty.

November is a fabulous month for seasonal food in Fethiye – and one of these foods grows in the wild; the Saffron Milk Cap Mushroom.

The Saffron Milk Cap Mushroom is also known as the Red Pine Mushroom or, if you’re in Turkey, they are called çintar.

As Fethiye market was the first place we’d ever come across Saffron Milk Cap Mushrooms, way back when, we only knew them as çintar and had no idea what they were or what to do with them.

But, we knew we were excited by them, so, all those years ago, when we first moved to Fethiye, we bought ourselves half a kilo of this mysterious fungi and took ourselves off home to do a bit of research.

Ahh, that little feeling of satisfaction when you work out what it is you’ve just bought…and found out that, in the UK, the Saffron Milk Cap Mushroom fetches more than double the price of its Turkish counterpart. And your chances of seeing them on the British supermarket shelves are fairly slim.

Where Does The Saffron Milk Cap Mushroom Grow?

Well, we don’t get much clue from the word ‘çintar’ – but the Saffron Milk Cap Mushroom’s other common name, the Red Pine Mushroom, gives the game away a tad.

These meaty mushrooms grow in pine forests and those of you in the know about Fethiye will know this area has no shortage of those! At this time of year, if you’re driving along pine-clad roads, keep your eye out for moving shadows in the trees – that’ll be locals foraging for Saffron Milk Caps.

But the çintar season isn’t guaranteed. Some years, you can walk around the markets of Fethiye and see stall after stall with boxes and baskets packed with carefully placed mushrooms (the Saffron Milk Cap Mushroom easily bruises) and the price per kilo can be as little as 5 TL. That means there’s been a good Autumn downpour or two.

Other years, we know it’s November, we know the Saffron Milk Cap Mushroom should be on the markets, but we can walk and wander and scan around carefully. And you might see just one guy selling a few from a box.

That’s when you know the rain has been scarce and when you’re looking at around 10 TL  for a kilo of Saffron Milk Caps. At times like this, the village market on Fridays is your best bet for landing some.

These are the villagers who are likely to have been out foraging and know the places to look when no significant rain has fallen.

We are truly blessed with this year's cintar fest. 🙂 Time to hit the kitchen again…bought yufka, too. 🙂 #seasonalfood #mushrooms #SaffronMilkCap #cintar #FethiyeMarkets

In 2014, as you can see from our Instagram photo above from that time, we felt like we had çintar mushrooms coming out of our ears. We’d never seen so many on the market stalls, the season continued through to late December and it was pine mushroom recipes galore for those two months.

But, for this season, we’ve just bought our first batch; 10 TL a kilo from one guy on Çalış Market who had a few in a box. We might be basking in Autumn sunshine and enjoying the pleasant warmth but Autumn sunshine doesn’t grow fungi!

So we don’t know what’s in store – that’s the beauty of seasonal food, you see – but we do know we’ve not had Saffron Milk Cap Mushrooms for 11 months. 3 TL for 300 grams doesn’t break the bank and we get to savour the seasonal delight that goes by the Latin name of Lacatrius Deliciosus…

So, if you’ve been to the markets around Fethiye (or elsewhere), made a purchase and are now wondering what to do with your orange-coloured Saffron Milk Cap Mushroom bounty, here are some ideas that we’ve experimented with over the years, and which are now an annual part of our cooking habits.

The Saffron Milk Cap Mushroom is popular in Spain where the Catalans fry them in butter and stir in scrambled eggs.

The mushroom is also cooked with chorizo or used as a topping for flat breads. And, should you find yourself in Russia, you’re likely to see the Saffron Milk Cap Mushroom pickled (interesting).

And if you’re chatting to a Turkish chef friend, he’ll suck in air between his teeth at the price you’ve just paid for your mushrooms, tell you he’s off up to the yayla (Turkish highlands), and then make you jealous by telling you he’s going to take the barbecue with him, forage for his own and then barbecue them with sizzling butter on them!