2016 and it’s time for our (roughly) monthly round up of goings on that we’ve noticed around Fethiye.

Not official news or anything like that – just our little random updates and musings. In this seemingly topsy turvy crazy world we all seem to be living in at the moment, you’ll be pleased to know that general daily life in Fethiye trundles on.

And, as I type this, it’s warm and sunny, the sea is flat calm and people are strolling and jogging up and down the harbour. You know; just the normal stuff.

A Change Along Phase 2 Of Fethiye Harbour 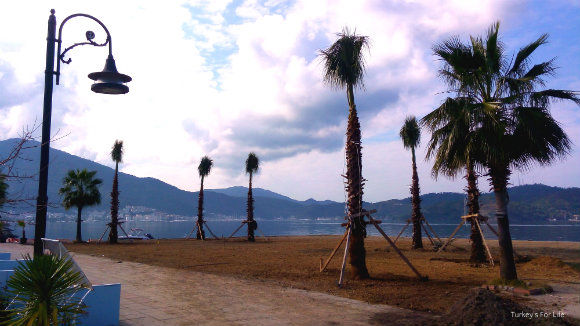 From pavement to garden on Fethiye harbour

It was a bit of a puzzle…but then we kind of got used to it.

People used it for fishing and the space has been used as a stage area for the Benyamin Sönmez Festival and other performances.

So, all well and good. And then, two or three weeks ago, workmen arrived in droves, lifted up all the paving stones and now we have palm trees, and – not in this photo – lots of underground pipes either for sprinklers or lighting.

Can’t quite work that bit out, yet. So, we shall wait and see for what’s in store for this little corner of the harbour. This is all going on just in front of Marine Restaurant, the one next to Matisse.

Weather At Both Ends Of The Scale – And Some In Between 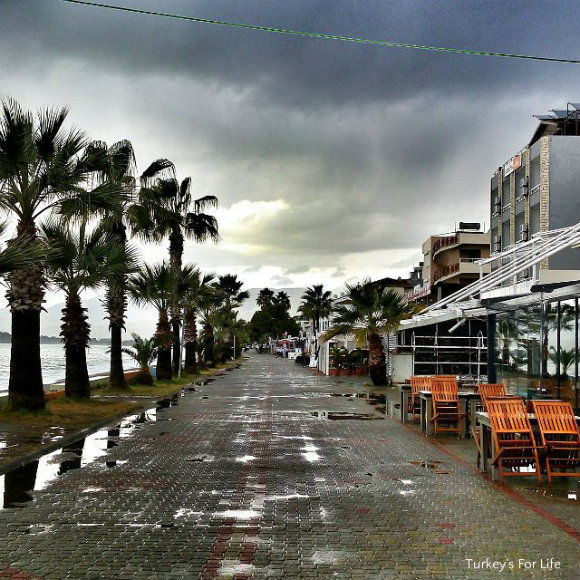 We love the views around Fethiye after a good storm

Yeah, the weather throughout January threw quite a lot at Fethiye. We plummeted to icy cold temperatures (a real feel of -11 degrees on one day) and had to go shopping for woolly hats and scarves.

And then, after the icy cold weather came a few days of wet, stormy weather. That quickly sorted out the lack of snow on the mountains – our sunny Kırkpınar Restaurant will now be covered in the white stuff.

But the snow in the mountains makes for cracking views as you wander around town, and, after a storm, we always know the sea at Çalış will be frothy and angry, each crashing wave leaving smooth sand behind it.

We were a bit too eager to get down there after one of the storms and got caught in another thundery downpour.

Çalış Beach was still looking great though, amongst the drama of clouds and puddles. You can use our Fethiye weather forecast page to keep yourself updated with what might be in store for us…

But, we’re back to warm and sunny at the moment…

January saw the second half of the Turkish football season kick off, and Fethiyespor, under new (but returning) coach, Beyhan Çalışkan, have had a bit of a mixed start.

A cracking 3-0 win at home – but played up in Muğla so we didn’t go to the match; a not-so-cracking 3-0 away loss to Bandırmaspor…and, then, this weekend, we won 1-0 at home to Nazilli Belediyespor.

The free kick which got Fethiyespor for that important 1-0 win against Nazilli on Sunday was scored by number 22, Hakan Kutlu. We just had to embed it from the Fethiyespor 1933 Facebook page because it was so good.

Fethiyespor’s free kicks are very much an on-off affair. The ball either soars into the air and into the stands…or it looks like Barcelona are playing. Nazilli Belediyespor’s goalkeeper was obviously predicting the former as he’s just rooted to his spot.

Oh yes, we all enjoyed that one. (This video was filmed by supporter, Cihan Duran, who then sent it to Fethiyespor 1933 to be shared publicly).

If you want to know a bit more about what goes on at the club, here’s a general introduction to Fethiyespor.

Life In Fethiye On The Blog

At Home, In The Kitchen…

We’ve also added a brand new recipe, too: paçanga böreği. We’ve still got lots more to update and we’ve got a couple of new ones to add this month, too. 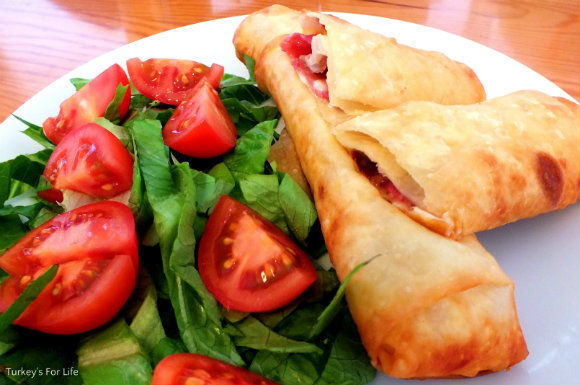 We revisited there in December, but it was January when we wrote about our visit to the fab Kırkpınar Restaurant, up in the mountains beyond Nif.

Çoban Kavurma was on the menu, that day, as well as homemade village bread, meze and water fresh from the spring.

It’s another addition to our eating and drinking suggestions around the area and we’ve got another one to add to the blog over this month sometime…and maybe more besides.

Who knows? Guess it depends if we venture anywhere different…

We thought, for some time, that the photo of Çalış Beach after the storm (above) was going to be in this little slot – but then it was overtaken.

As we said, after the storm, there was no shortage of snow on the mountains, the sun came out again and sometimes, the best pics are those you take as you’re walking along, doing nothing in particular.

One day, we just had to stop and snap a photo – on the phone, not with the camera – of the beautiful Fethiye scene in front of us. We uploaded it to our Instagram and our Facebook page and it seems others thought it was a pleasing sight, too.

There’s so much to see and do in Fethiye – but it’s also the familiar, that which we see every day, that can often make us stop in our tracks to stand and appreciate. Fethiye’s that kinda town!

And that just about wraps up January in Fethiye. Lots more going on, too, of course. Loads of bars with live music on, etc.

Bluestone are still rocking Deep Blue Bar, for example. We do drag ourselves out occasionally of an evening in winter…but being at home toasty and warm, cooking, blogging, planning trips for the year ahead…

That’s winter for us…

Blowing another gale here today, hope it's calmer where you are.

We've got a strong wind in Fethiye, blowing off the mountains, BacktoBodrum - not very conducive to running but we managed...slowly. :)

I really, really love the stormy pics. Especially that second one. So gorgeous! :-)

Fethiye in winter (for us) can be so much more beautiful than Fethiye in summer, Krista. We love the differences in the weather. :)