We want to tell you the story of our Simena Kaleköy experience in this post. About that happy, gleeful feeling that takes over your body when you’ve found a little corner of perfection.

Have you ever looked at postcards, online photos or official tourist board posters and been faced with a vision of what looks like paradise and thought, “I need to be there.”

After much anticipation, the day comes where you finally get to see that vision in person.

And then that sense of deflation melts through your body as you look at what’s there before you, your brain demanding to know from you, “Is this it? Is this what we’ve waited to see, all this time?”

That’s what we feared when we were on our Lycian coast gület cruise and the day finally came where our captain announced, “Today, we go to Simena…” 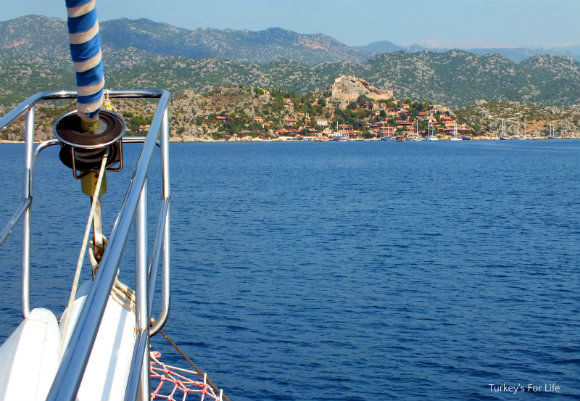 Our captain steered the gulet slowly across the bay towards Simena

Our captain had expertly steered our gület over the sunken ruins of Kekova and now we were heading to the opposite side of the bay towards that oh-so-pretty hunk of rock, jutting out of the sea.

Houses, restaurants, Lycian rock tombs clinging to the rock face. And all magnificently crowned with a mediaeval castle.

But would it be like that once we were up close and personal? Was Simena going to be everything we  wanted it to be? 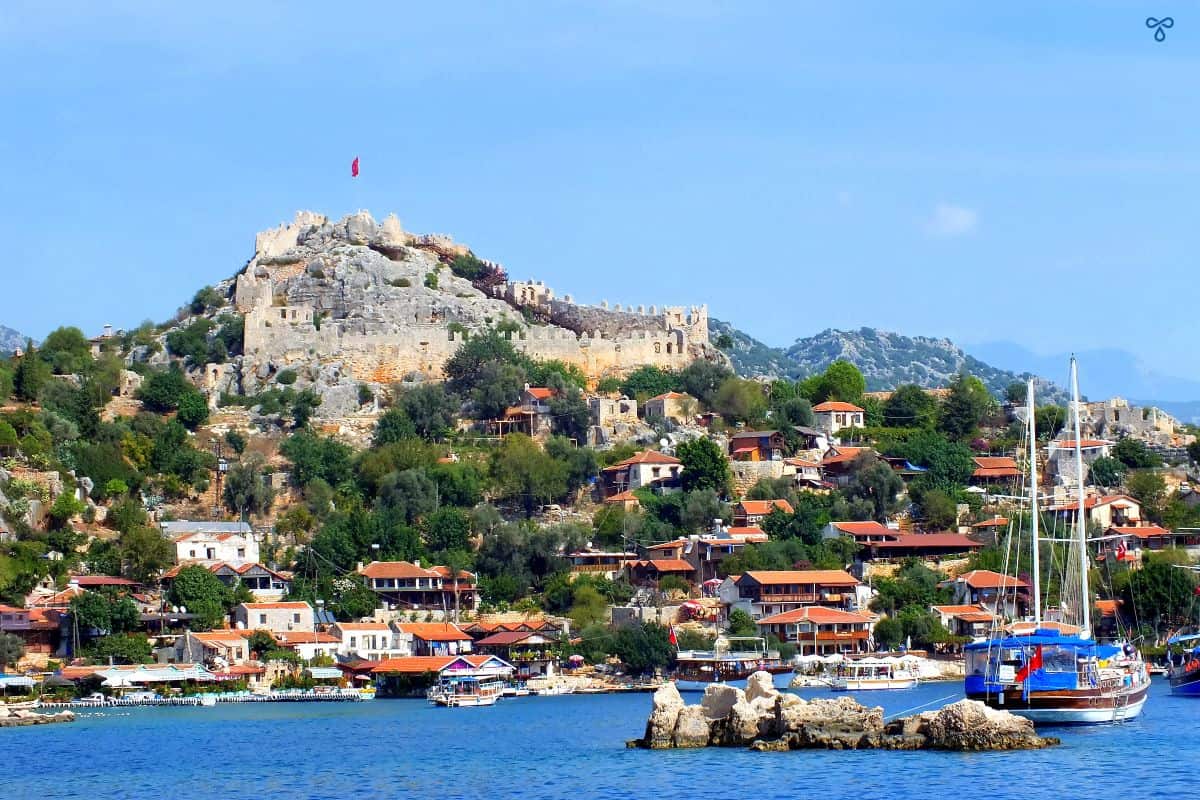 Drawing closer to Simena only added to the anticipation

Well, the camera was in overdrive. The closer our gulet edged to ancient Simena, the further the ridiculous grin stretched across my face.

Well, how can you not just completely fall in love with that view? We were both itching to hop off the gulet, into the dinghy and get ourselves onto the dry land of the village of Kaleköy. 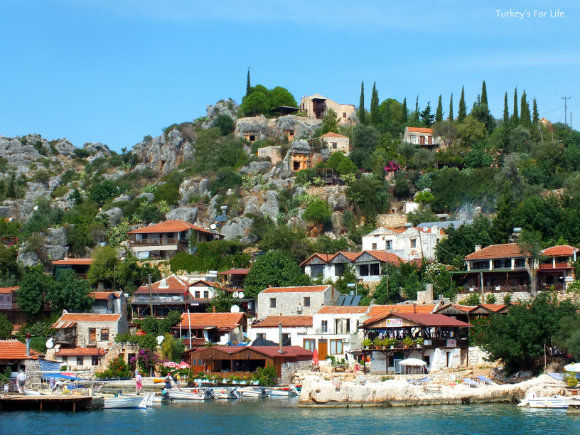 Anchoring the gulet at Simena seemed to take an age

And you know exactly what it’s like when you’re just bursting to go somewhere. The gulet reversed and turned and reversed again and manoeuvred. And the deck hand lowered the anchor and shouted to the captain.

And then the whole process seemed to start again. T

his was all complete excited impatience on our part of course. An idyllic sight before us, but we had to wait for the gulet to anchor.

And then, finally, the dinghy was pulled to the side of the gulet and those of us who were heading to Simena jumped in.

What a perfect way to arrive at such an achingly pretty village; the grace and tradition of a Turkish gulet and then jumping onto the jetty from the dinghy.

Apart from by foot, boat is the only way to arrive at Simena – no noisy cars or roads here.

“I’ll pick you up in two hours,” said the deck hand and with that, he was off – at a good few knots faster than when he had us guests with him. 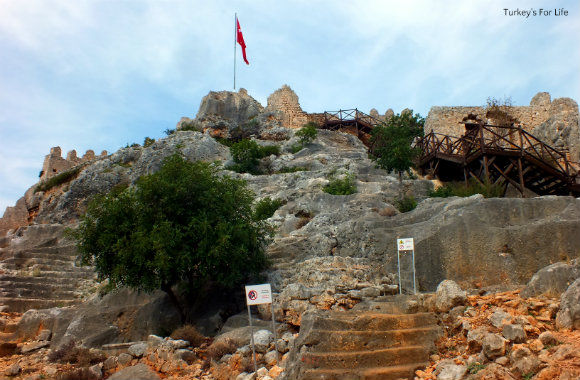 First mission was to climb the hill to Simena Castle

Two hours. Perfect. Some gulet itineraries only make a short hop to Simena, so two hours felt great for a leisurely taster.

Our first mission was to climb to the top of the village to Simena Castle.

In Turkish, the word for ‘castle’ is ‘kale,’ hence the modern name of the village, Kaleköy (Castle Village), or Kale for short.

The castle was built as a fortress by the Knights of St. John (Knights of Rhodes) to defend against the pirates around the area – no doubt the same pirates who had a penchant for pillaging the harbours of Phaselis. 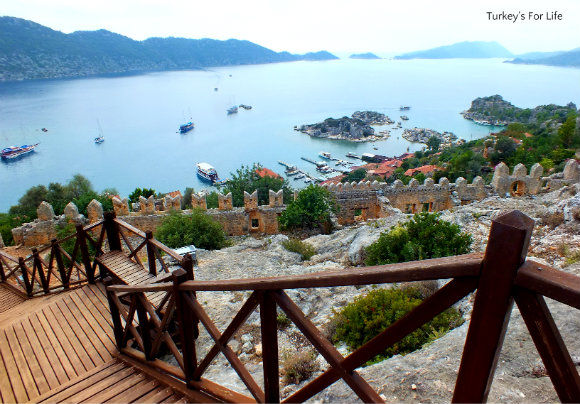 And can’t you just see why they chose this spot to build a fortress?

These days, the path to the castle above Simena is an ancient, stone path of huge steps lined with villagers selling various goods to those out-of-breath tourists who choose to heave their bodies to the top in the hope of being rewarded with extra special views over this area of Lycian Turkey.

We paid our fee at the entrance booth and, from there onwards, climbed the new, wooden steps towards the top.

Not without making numerous stops to take in the view and also take numerous photographs, too. 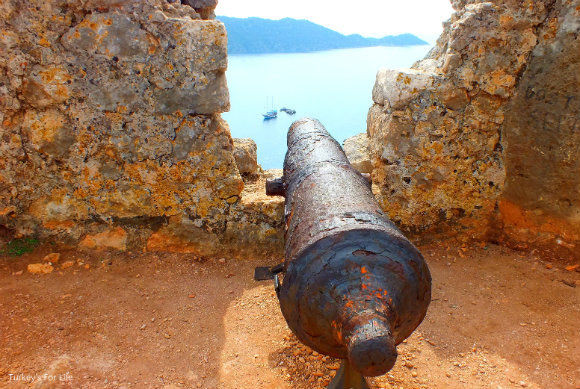 The boats below look like easy pickings for this cannon

Climbing to the top of the castle at Simena was well worth the effort.

The hillsides to our left were littered with a mix of ancient olive trees, carob trees and Lycian rock tombs. The tombs are just everywhere – a beautiful sight.

From the fortress walls, a cannon still rests, eyeing the gulets below. Any pirate ships that sailed into these waters must have been easy pickings for the knights. 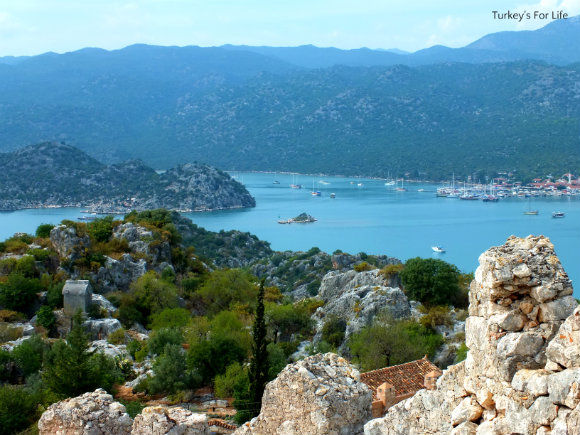 Simena Castle is a perfect place for getting your bearings

As we wandered around on the roof of Simena, we came to the opposite side of the castle.

Below us is the village of Simena with daily life going on there, opposite are the sunken ruins of the island of Kekova, to our left is rocky land scattered with Lycian rock tombs.

And, now, here, to our right, is a couple of houses, the odd rock tomb and incredible views across to the harbour and village of Üçağız.

Üçağız is to be another stop on our cruise so let’s not dwell on that for now. Back to Simena.

We’d only used about half an hour of our time so we made our way back down to the village for a bit of exploration.

As well as photos of the village of Simena from the water, I’d also seen (and no doubt you have, too, if you know Turkey) photos of a lonely Lycian rock tomb, partly submerged in calm, Mediterranean waters.

I wanted to see that tomb for myself and we’d spied its whereabouts from the top of the castle. 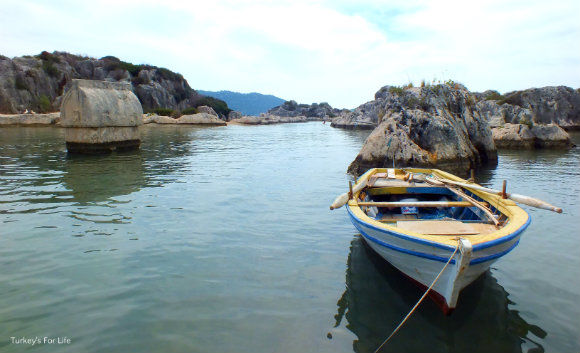 Finally; face to face with the sunken Lycian rock tomb

The hillside that Simena is built on is very steep but the village is so tiny that we were back down to sea level within minutes.

We followed a narrow, dusty path through huge cactus leaves and eventually reached the sight we wanted to see. Just the ultimate tranquil spot!

The only other people around were a young couple just sitting on a rock, taking in the view and no doubt feeling the history and tranquillity all around them, just as we were.

Maybe, in the height of the summer season, tranquillity is a tad more difficult to come across around Simena with kayaks, day trip boats, gulets and private boats all offloading their human cargo to explore the village as we were doing.

But we were here in October – life had slowed down a little.

And as we ambled back towards the harbourside restaurants, we were greeted with a touch of daily life in Simena. 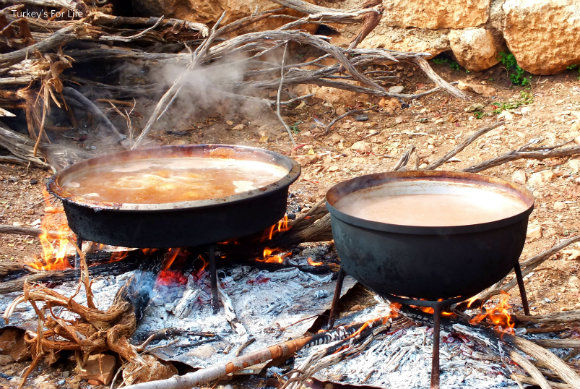 What on earth was bubbling away in these cauldrons?

I took a photo, and then asked teyze what she was making.

We’d been speaking Turkish all week on the gulet with the crew. They were all from the Demre area, so we were feeling quite confident by now that we’d be able to follow at least some of her reply even if with a potential village accent.

She gave us a big grin and told us she was making pekmez with keçiboynuz.

“It’s not ready yet, though,” she said. “Come back in the morning and I’ll give you some.”

Ohhh, how we wished we were staying over and could return in the morning for the pekmez and more faltering chatter with this sweet lady.

However, a harbourside restaurant (and a cold beer) was calling our name so we thanked the lady and took ourselves off to quench our castle-climbing thirst, keeping the word ‘keçiboynuz’ in our head so we could ask the guys on the gulet what it was. 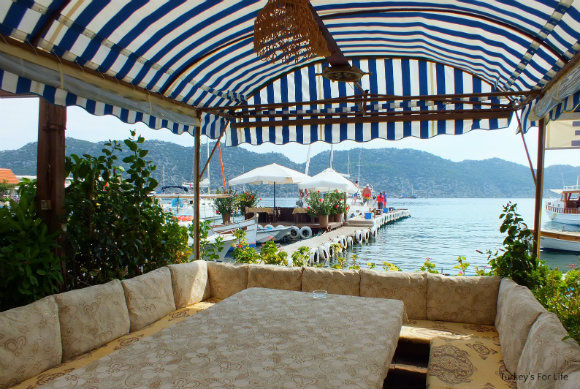 A cold beer and a Simena jetty view – lovely

And again, Simena didn’t disappoint. Just us and another family in there enjoying drinks in leafy shade from the afternoon sunshine.

We sipped our ice cold beers and sighed with happy satisfaction that Simena Kaleköy had not just lived up to expectation, but burst way beyond that. And we know we’ll definitely be back one day, preferably for an overnight stay.

Just arrived here and reading your blog entry again after having seen it on Facebook . Just amazing . We are off to explore in the evening light . Lucky enough to be sailing so we are staying over more exploring tomorrow.

Thanks a lot for your comment and great that you visited Simena. We are trying not to be a little bit jealous that you got to stay overnight. ;) How was it? We hope to get back to that area again soon.

We've been to Simena and really enjoyed it too. And we climbed to the top of the fortress - that timber decking looks new since we were there. The views are gorgeous from the top and it is a very special part of Turkey.

Yeah Simena is definitely special. Guess the new wooden steps on Simena Castle are to protect the stone and protect people from the more dangerous crumbling aread. The views are amazing, aren't they. :)