If our previous road trip around Southwest Turkey was about reacquainting ourselves with some old favourites  – the ruins of Ephesus, the Pamukkale travertines and Hierapolis – then our most recent road trip was all about exploring pastures new around the Turkish Lake District. First stop, en route to Eğirdir, was Salda Gölü (Lake Salda).

We were a bit nervous about arriving at Salda Gölü. Although it was declared a National Park in 2011, there was never much in the way of visitor facilities (there still isn’t too much around there) despite a growth in visitor numbers. 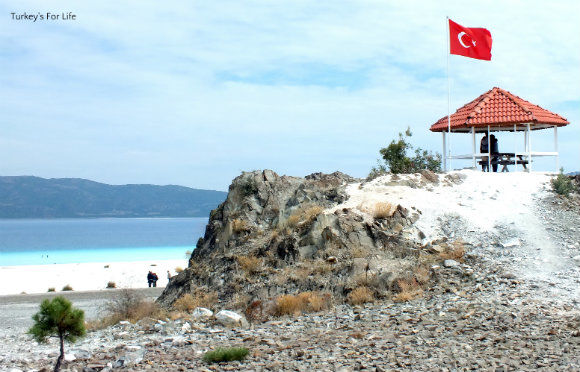 A glimpse of the stunning Lake Salda

And no doubt social media – particularly Instagram – has had a part to play in rocketing visitor numbers. We’ve seen so many photos of Salda Gölü on there and the immediate thought is, “Wow, amazing. I want to go there and see that, too.” And we decided we needed to ‘go there and see that, too,’ pretty quickly before the environment changed too much. Because Salda Lake is a truly amazing sight – no exaggeration! 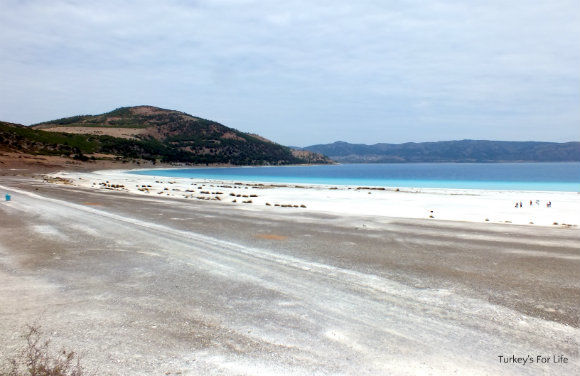 Looking over Lake Salda from the viewing point

Visit Salda Lake Out Of Season For Peace And Tranquility

We wanted to see the vibrant blues of the lake, we wanted to see the dazzling white sand – everything we’ve seen in the photos. We didn’t want to see what everyone was starting to complain about – litter! So yeah, we were a bit nervous that our excitement of finally driving up to visit the natural phenomenon that is Lake Salda would turn into being depressed by the state of the place.

It was the end of September, dappled cloud cover and a weekday when we arrived at the car park in Salda. Maybe it was the time of year, time of week and the state of the weather that went in our favour because we arrived to a scene of isolated bliss. Just a few other visitors wandering across the vast open space towards the water. 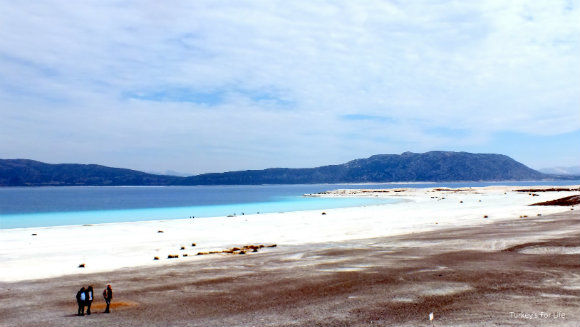 We took in the panorama from the viewing point

Lake Salda has an altitude of 1160 metres. That means summertime visitors get relief from the intense heat by enjoying the cool air and even cooler water. When Turkey’s searing summer heat begins to cool in lower altitudes, however, that leaves Salda Gölü feeling cold.

We didn’t need sleeves that day but the temperature difference between where we’d just driven from in Fethiye compared to Salda was definitely marked. Most of the other visitors – as you can see in the photos – were wrapped up in coats. And that litter we feared? Well, maybe it’s because we visited out of season but, thankfully, someone somewhere has done a big clean up. This shore of the lake at Salda was pristine. Numerous litter bins now also line the beach. 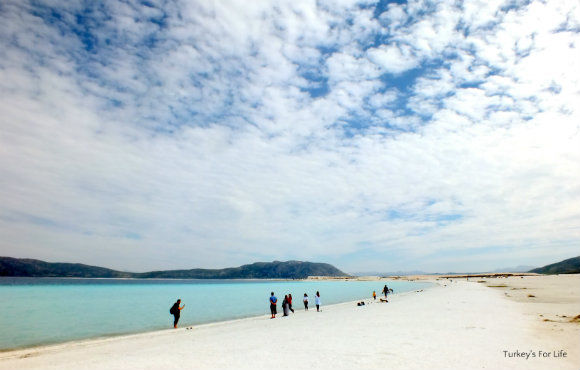 Even on a cloudy day, we needed our sunglasses to reduce the glare from the shore

Lake Salda is a crater lake and reaches a depth of 196 metres, hence the dramatic change in colour between the shallows around the lake shore and the centre. It has high alkaline levels and people are starting to come here to bathe in the soft white ‘mud.’ Apparently, partaking in such activities does wonders for a variety of dermatological problems.

We weren’t here for bathing, however. This was a driving break – and what a place to take that break! To stand there, on the shoreline, it really did feel other-worldly. Almost like being on another planet. 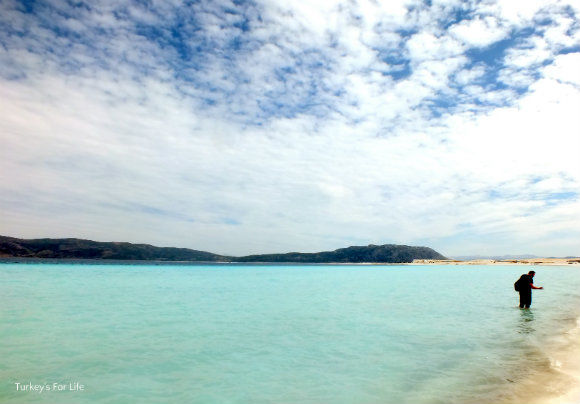 Being at Salda Gölü is like being on another planet

And don’t just take our word for it when it comes to all this other worldliness. Microbiologists are in on the act, too. If the study of life on Mars is your thing, then you need to visit Lake Salda. Turkish scientists noticed that the white rock formations of Lake Salda – called stromatolites – resemble the ones on Mars. The studies centre around microbes in Lake Salda and other lakes in the area and whether they could also be ‘Mars bugs.’ They may hold the clues to potential life on Mars… 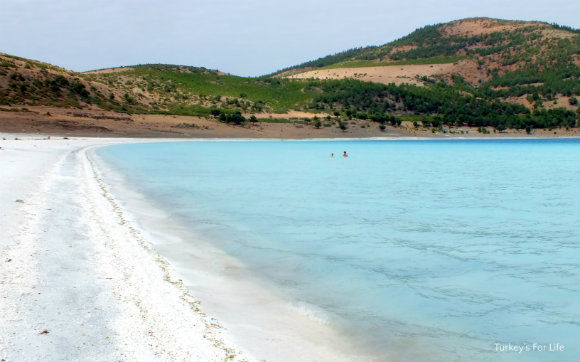 Brave swimmers on a cool day at Salda Gölü

The mysteries of life on Mars are not the preoccupation of most people who visit Lake Salda, however. We were there purely to marvel at the scene before us. A couple of brave people were there for a swim. Definitely a summertime activity for us, though. Barry waded in up to his knees and quickly waded back out again! 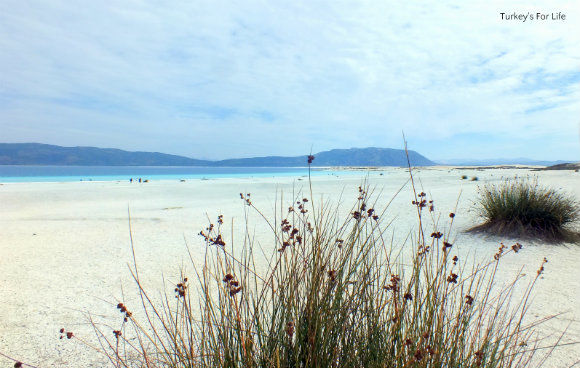 Salda Lake and shore are known as the Turkish Maldives

As well as being famous for its links to Mars, you probably won’t be surprised to learn that Salda Gölü also has another nickname. And the mayor of Yeşilova – the main town by the lake – has fully adopted this nickname on the billboards around the area. It’s that dazzling white shoreline (wear sunglasses) contrasting with the turquoise waters that does it. Welcome to Turkey’s Maldives (Maldivler in Turkish).

But the visitors to this lake are not content with borrowing another name and why should they be? So, welcome also to the Saldives (Saldivler in Turkish). There’s always something to make you smile on travels around Turkey. 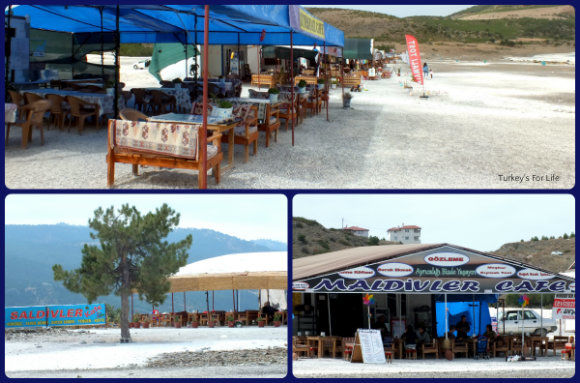 Of course, the eateries along the beach are not going to let those nicknames go to waste, are they? If you get hungry at Lake Salda you can eat at Maldivler, Saldivler or any of the other snack bars along the beach. They were all serving similar fare; gözleme, sucuklu tost, köfte and also a famous tost of the Burdur Province; Meşhur Kıymalı Tost.

You know us; if we spot a local speciality, that’s definitely got to be our food of choice. So we went for the renowned Burdur kıymalı tost. A toastie with a mince meat filling. A bit of spicy salça (tomato puree) in there, too, and a sprinkle of chopped parsley for good measure. A local speciality lunch overlooking a mesmerising lake. What better set up to ready us for the next stint of our road trip? Onward from Burdur Province’s Lake Salda to Isparta Province’s Lake Eğirdir; our base for the rest of our road trip…