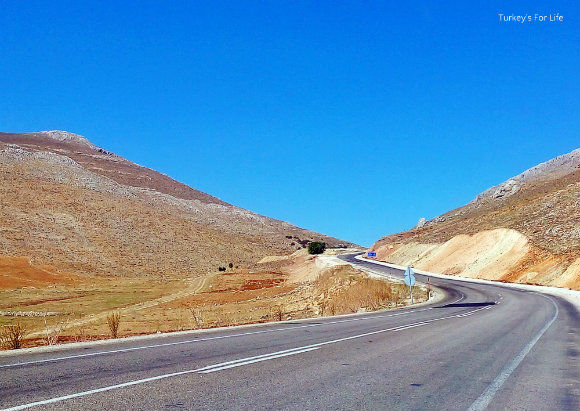 It all got kick started with a wedding invite. We’d been talking through summer about maybe taking off for a few days at the beginning of October – some vague plans of hiring a car, taking in some archaeological sites and having a wander; a bit like our East Turkey road trip. An invite to a wedding on the Greek island of Meis at the end of September cemented the fact that we would go away for a few days and we eventually decided on a circular Southwest Turkey road trip…

Intercity bus travel in Turkey is fantastic but it’s also nice to be able to choose your own routes sometimes. Setting off at your own speed, stopping off to take photos and turn off along minor roads you might not see otherwise. Not that it went without discussion when we asked advice about our route from Turkish friends!

You see, because the wedding was in Meis (Kastellorizo), we would be spending the night on the island and then spending the following night at Meltem Pension in Kaş. After that, we wanted to head for Denizli and the travertines of Pamukkale and this is where the discussion began.

Two Turkish friends agreed with us – set off via the mountain roads towards Elmalı and then keep going northwards through the yayla (highlands) towards Denizli. Two other Turkish friends looked at us in bemusement. Nooo, you don’t want to go that way. The roads are bendy and steep, you can’t go fast, it’s a silly road. (These are the same people who think we’re daft when we drive back from Antalya on the D400.) They wanted us to head back towards Fethiye and then take the D350 yayla road towards Antalya. Much faster, they said. Wider road.

But we didn’t want to turn back on ourselves. And we’ve experienced the D350 yayla road countless times. This wasn’t about getting from A to B in the quickest time possible. I love to drive and we’d hired a car to do our own thing. And so, after a night in Kaş, we set off the following morning and headed north, through the mountains.

We climbed and climbed; third gear being an occasional speedy treat. Snow poles marked the road edges. This is not a route to be taken lightly in the winter months but, on this sunny October morning, all was perfect with the world. Mountains, pine trees, lush greenery, tiny villages, baron hillsides after the long summer.

There was barely any traffic on the roads so we had lots of opportunity to stop and take photos. Three times, however, we were held up by herds of 4-legged traffic. 2nd October must have been the day that shepherds and their shepherd dogs started to herd the goats from their higher lands to the warmer lower climes. No complaints from us – lovely to sit and watch them pass by in their hundreds, dogs obediently trotting along behind them.

A few of our friends have said to us in the past how they would love to take off and drive somewhere in Turkey but they’re scared to take the plunge and drive here. Yeah, towns and cities can be traffic-filled and sometimes the odd driver might not do what you would expect them to do. Signposts might disappear right at that moment where you really need a signpost. But you get used to all that. And it’s all worth it for when you leave those towns and cities behind. Turkey is an amazing country to drive in!

So, where did we go on our road trip and why? We’ll be doing articles about each stopping point of our Southwest Turkey Road Trip. Our map above is completely interactive so you can zoom in or out and we’ll be adding photos and links to each pin as we go along.

Yes, stage 1 of our road trip was Fethiye to Kaş so that we could get on the ferry to go over to Meis for the wedding. Whilst we’ve made countless trips to Meis in the past, this was the first time we’d stayed overnight. Blog posts to come about where we stayed and, also, our fabulous walk to the top of Kastellorizo island we did the following morning to blow away the post-wedding cobwebs…and drinks.

We discovered a new favourite bar in Kaş. New for us – the guy said he’d been there for 25 years! Shows how observant we are.

Time really was of the essence on our Southwest Turkey road trip. We had friends and family arriving so we couldn’t be back in Fethiye any later than Wednsday night. In this leg of the trip, we had hoped to be able to take in other archaeological sites en route but daylight hours prevented that. All saved for another time so no worries, there.

Pamukkale & Hierapolis were the most important on this occasion. It was 13 years since we’d last been there, all our photos from that trip were lost and, since that time, we’ve started this blog and created our UNESCO Turkish World Heritage Sites page. We want to visit as many of those sites as possible and Pamukkale & Hierapolis is one of those places on the list.

Same story. 13 years since a trip to Ephesus and all photos lost. Since that time, the Terrace Houses have been excavated so we also wanted to see them. Another UNESCO World Heritage Site, too. On our first visit, we stayed in Selçuk and fell in love with the town so we were looking forward to staying there once more. We even stumbled across the same pension so we stayed there again for nostalgia purposes. Lots of blog posts to come from this little leg of the journey…

Yes, we still had lots to see and do on the final day of our southwest Turkey road trip. This was a great day, if tiring, and as you can see from the list, lots of articles to come from this. Şirince was a revisit, like Ephesus and Pamukkale. Kuşadası – we were just curious and it was nearby so why not? Bafa Gölü – been itching to go there for a while and it was en route back to Fethiye. A lovely meal by the lake before the long drive home.

A note about our route: In an ideal world, we would have taken at least two more days to do this trip so we could take in more archaeological sites along the route. If you love a drive, however, 4 nights should do the trick.

Are You Ready For The Southwest Turkey Road Trip?

As you can see, we packed a lot into our few days away and there was more besides; particularly in Selçuk. This town is just rammed with things to see and do. Lots of blog posts to come. The car is filled with diesel, the seat belts are on. Time to head off for our first stop; Kastellorizo. Let’s go…