It’s usually around mid-June when the time comes to start craving a mid-morning Greek-style frappe.

When we linger over that first one of the year, that’s when we know summer is here and we’ll be drinking frappe most days until the end of September, at least.

We love a Turkish coffee – but that’s hot.

We love iced coffee – so many cafes and bars to choose from in Fethiye that do a great iced coffee. We can go to town with those. Ice cream, different flavourings.

But, at home, it’s about memories – taking ourselves back to a bit of Greek island life and refreshing ourselves with an ice cold Greek frappe.

One favourite Greek frappé memory is from the island of Meis.

We’d been to a friend’s wedding the day before, stayed on the island overnight and somehow managed to wake up early to climb the cliff steps to the Monastery of St. George of Vouni.

All of that, of course, was thirsty work.

It was still early morning when we got back down to the harbour. And it was just the perfect setting to sit outside one of the cafes and order a frappe.

The chatter of the islanders, the lapping of the sea against the harbour wall…

What Is In A Frappe?

Before Barry started making his own frappé, we always assumed they would be difficult to do.

Surely the frappés we had had in Greece were made with filter coffee or Greek coffee.

And surely you would need a frappé machine or mixer to get the required texture?

But no, that is not the case.

What differentiates a Greek frappe from a simple iced coffee is the thick, creamy froth that forms as you make it.

And for the history of the Greek frappé, we don’t have to go back to some far away time. Just as far back as the 1950s, in fact.

According to this article, the Greek frappe came about in 1957 when a rep for a very famous brand of instant coffee was at a trade fair in Thessaloniki.

That rep was Dimitris Vakondios and he wanted his usual hot drink.

On being unable to find hot water, he apparently mixed his instant coffee with ice, sugar and cold water. And shook it all up in a shaker.

He loved the result. And, since that time, the Greek frappé has played a central role in Greek cafe culture.

So, that’s the next important thing to remember if you want to make a Greek frappé – instant coffee, rather than filtered!

It just gets easier and easier.

How To Make Greek Frappe

And the next thing to remember is, if you haven’t got a frappé machine or mixer, no problem!

You can make Greek frappé with a cocktail shaker. Or, simply do what we do and use a jar with a lid.

Just make sure that lid is tight-fitting!

We have individual jars and drink our frappé straight from those.

First of all, we need to achieve that thick, creamy froth.

This is done by adding your coffee, sugar and a splash of water to each of your jars.

Place the lid on the jar and shake up and down for around 30 seconds. You will both hear and feel the mixture start to change consistency as you shake.

Eventually, you will have your thick foam in the bottom of the jar.

Then you just need to add lots of ice and decide if you prefer your Greek frappé with milk and water or with water only.

We make ours with a mix of milk and water.

So, in these, the blazing hot days of summer, let’s cool ourselves down with an ice cold milky frappé. 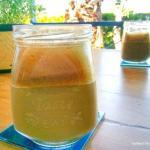 Sometimes, we stir our frappé.

Other times, we just leave it as it is with the frothy top and the milk swirling as it mixes with the coffee, water and sugar solution.

A summer brunch time glass never fails to hit the spot. So cooling and so satisfying.

But, all good things must come to an end – until the morning after, when we can once again indulge our love of a Greek frappe…