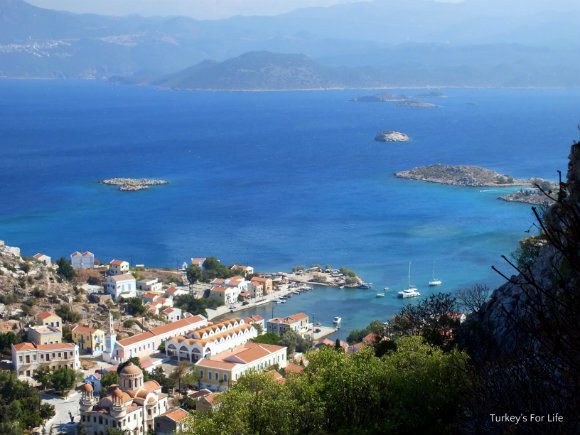 Finally! How many years have we arrived by boat from Kaş to the Greek island of Meis (Kastellorizo) and gazed across to the vertical cliff face that frames the main harbour?

Narrow walled steps winding steeply right up to the top before disappearing over the summit.

How long have we been saying, “We must climb those cliff steps, one day.”

Getting some height is our top suggestion for things to do when you’re in Meis.

It’s taken a few years but we can now say we’ve climbed the Kastellorizo cliff steps!

Okay, the steps don’t lead right to the top of the island but you’re not far off, once your foot hits that last step.

We’d never done this walk before because we’re always on the island for the day and most of that day is taken up with Greek foodie indulgence.

An invite to a wedding at the Megisti Hotel, however, meant we got to stay overnight in an apartment on Kastellorizo.

What better way to wake ourselves up and rid ourselves of the excesses of the previous day’s wedding than a brisk uphill climb on a breezy, sunny day?

It was 9am, the ferry back to the Turkish port of Kaş wasn’t until 4:30pm. Loads of time to climb, photograph, explore…and eat, later.

Off we went to the Horafia area, finding the entrance to the steps just opposite the impressive, but derelict, Agios Georgos Church.

At first, it was an uphill, cobbled footpath with a few steps at each interval.

Every 50 steps – but at odd numbers, starting with 49 – there are painted numbers so you can measure your progress.

It’s allegedly 400 steps to the top of the cliff. I say ‘allegedly’ because when you (gratefully) reach the ‘400’ marker, there’s still a few more steps to go and another ‘400’ marker.

No way were these two walkers about to do a recount.

Views From The Kastellorizo Cliff Steps

Because the path is so steep, it didn’t take long for us to have panoramic views across the island’s main harbour and back over the short stretch of Mediterranean to Kaş.

The remains of the castle of the Knights of St. John directly ahead of us, guarding the bay.

All around us were olive trees, pines, scrub and carpets of colchicum variegatum that kept us completely fascinated.

To lay people like us, the colchicum variegatum is an autumn crocus and, lest you go thinking we have suddenly morphed in horticultural experts, that is not the case at all.

We’d never seen these wildflowers before and amongst the scrub and dead pine needles they brought a stunning autumnal splash of colour.

Fortunately, we have a friend who is a horticulturalist. It is she who put us out of our misery in trying to decipher what they are.

Native to Greece and Southwest Turkey, people all over the world try to grow and cultivate this flower.

Guess we were lucky to catch them in their prime, in their natural habitat.

The steps get steeper and steeper. But, hey, what’s the rush with stupendous views like this make you stop and stare?

Choosing photos for this post has been a difficult undertaking – scores to choose from.

But we wanted to make sure there were some photos that reflected the route of the Kastellorizo cliff steps as well as showing off the Mediterranean views and the harbour below.

How uplifting to be so far up the cliff that we could see the main harbour and also over to the other side; Mandraki harbour.

From here, you get an idea of the size of the island’s cathedral complex and look out over the archipelago – rocky outcrops breaking the expanse of blue waters.

And then that happy sight.

The cobbled, rocky footpath and steps give way to earth and scrub and the final boulder tells you that you’re at step number 400. And, therefore, at the top.

Actually, you’ve got to keep going for a few seconds longer to the top that you can see in the photo. You won’t care, by this point, though.

We hadn’t seen a soul all the way up the hill and then, just as we hit that summit, a guy appeared.

The guy we’d bumped into was a guest at the same wedding as us the night before. He, too, was blowing away cobwebs and was supposed to be with a friend.

Said friend had decided prolonged sleep and leisurely breakfast was far more appealing than clambering up hills on a Greek island with a hangover.

In fact, the night before, a few of the guests had pointed at the steps etched into the hillside and said, “Definitely heading up there in the morning!”

And there we were, that following morning. Just the three of us.

Photos taken, our fellow wedding guest and hill walker told us it was only another 10 minutes or so as far as the monastery of St. George of Vouni.

He went on his way, back down the steps of the cliff, towards the harbour. We pressed on, seeing a whole new side to Kastellorizo.

Onwards From The Cliff Steps To The Monastery

It was a breezy day and once we hit the top of the cliff, the breeze became a wind.

Pleasant in temperature and we were actually quite grateful for it after our climb up the steps.

From the protection and shelter of the harbour and the cliff stairway, we were now completely open to the elements.

Neat cobbled streets had given way to mountain scrub and huge, flat boulders.

The pathway, although clear and easy to follow, was tough and rubbly underfoot.

But we were the only people around.

The views of the Mediterranean had disappeared and we no longer felt like we were on a tiny island.

We were experiencing Kastellorizo in a whole new way and it was great.

If we were feeling the excesses of the evening before whilst we were still at sea level, the climb, the breezes and the scenery had certainly blasted those away!

The Monastery Of St. George Of Vouni

The goal of many people for climbing the steps of the cliff on Kastellorizo is simply to achieve the task and enjoy the amazing views.

Continuing that little bit further offers a completely different perspective of the island, however, and it really isn’t taxing.

Beautifully maintained – and completely locked up.

A Ministry of Culture information board told us we were at the monastery of St. George of Vouni.

Well, we had climbed the Kastellorizo cliff steps and this name means, ‘St. George of the Mountain.’

We were also at the 18th Century Crypt of St. Charalambos and at the site of an early Christian mosaic pavement.

Oh, how we would love to be able to mooch around, behind those thick stone walls.

St. Charalambos was an early Christian bishop and is a prominent saint in the Greek Orthodox religion.

In Greek, his name is said to mean, ‘glowing with joy.’

His crypt lies beneath the monastery floor.

Onwards – And A Return To The Kastellorizo Cliff Steps

A neat tarmac road leads away from the monastery so we decided to have a little wander in that direction.

After around 5 minutes, you get a glimpse of the vast expanse of open sea – the other side of Kastellorizo.

You also start to glimpse camouflaged army bunkers and look outs – and signs instructing you not to take photos.

Kastellorizo may be a tiny island but the road ahead looked long, winding and very hilly and we weren’t sure where it would lead.

We did an about turn and headed back from whence we came. I took yet more photos as we descended each step of the stairway leading back down the cliff.

Three Greek army guys jogged past us, on their way up the hill.

Some people are fitter than others.

For us, it was a welcome ice cold frappe when we reached the harbour once more.