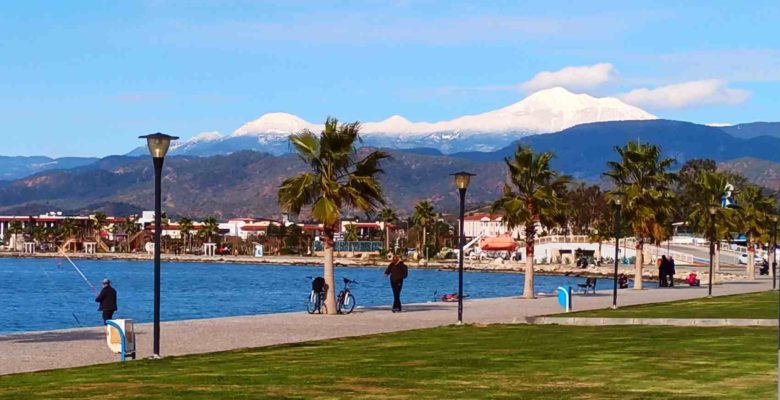 Is this us starting 2022 as we mean to go on? Being a few days late with our monthly Fethiye news update?

Who knows? But we do get there eventually.

So, as we’re a little late with the first news update of the year, let’s get straight to it…

It Was All About The Weather

Of all the years we’ve lived in Fethiye, this is easily the coldest winter we’ve had over a prolonged period.

January threw just about everything at us.

Although we didn’t get any at sea level along our stretch of road, there was even a bit of snowfall in some of the more sheltered streets around town.

And, just along the road in Dalyan, the guys from the turtle rehabilitation centre posted these amazing scenes of snow on Iztuzu Beach.

Compared to places like Bodrum, Marmaris (who came up against a deluge of hailstone) and Köyceğiz, Fethiye wasn’t too bad.

We always seem to be more sheltered from the elements compared to other towns along the south coast.

And we’ve also had those freezing cold, bright clear days where we’re rewarded with the majestic views of the mountains, crowned with pure white snow.

As I sit here, typing this, the temperatures have climbed to more familiar Fethiye winter figures.

And the sun is shining. It’s greatly appreciated!

Throughout January, one of the things we’ve been doing to keep ourselves busy is lots of work on the blog.

Our page all about the weather in Fethiye has seen the benefit of this.

Cold weather on higher ground obviously brings with it lots of snow. So the local council, Fethiye Belediyesi, have been kept busy.

Food has been scattered around snowy forested areas for the wild animals that live there.

And huge snow ploughs have been in motion to clear mountain roads from thick snowfall.

We decided 2022 was going to be the year where we fully embraced being back to some sort of normal where the pandemic is concerned.

And part of that means heading to watch Fethiyespor again.

Such a long time since we’d been to the stadium to watch a match.

But, once we were there, it was like we’d never been away.

The usual raucous crowd. And, of course, a tasty half bread filled with köfte.

Unfortunately, since this match, it’s been a bit of a losing streak for the team. Their clear lead at the top of the 3. Lig table has disappeared.

And more – they’ve slipped a place!

Coffee lovers will be pleased to know there’s yet another coffee shop opening in town.

What was formerly the Carnival Restaurant under the Orka Boutique Hotel is currently being converted into a coffee shop of a well known, Australian-based chain.

We already have a sizable branch along Çalış Beach. And there is a seemingly-constant crowd of people sat outside, sipping coffee by the sea.

That will now be an option in Fethiye, too.

As well as the well known chain coffee shops, Fethiye is also blessed with lots of small, independent places. So keep an eye out for those, too, if you’re a coffee lover!

We’ll have to see how this works in practice…

But it looks like the 2022 summer season is going to be pushing for a bit more awareness of the fact that Çalış Beach is an important nesting area for Caretta Caretta sea turtles.

There are also wooden stakes along the beach, embedded at intervals.

Beds, umbrellas and sunbathing on the sand will be forbidden beyond these stakes, close to the shoreline.

In theory, we guess this should mean that turtles get an easier pathway to come ashore to lay their eggs.

And the future hatchlings should be able to make their way to the sea once they’re free from the nest.

We’re trooping away with the blog at the moment.

As well as bit of revamp on our weather page (mentioned above) we’ve also been busy in other areas, too.

Don’t Miss Out On The Best

We’re as excited as everyone else about the prospect of a good summer season for Fethiye.

And other areas of Turkey, of course.

Ever since we started this blog, back in the day, we’ve had a list of must sees and dos for Fethiye.

Well, for 2022, we’ve gone all out for the bumper list of the best things to do in Fethiye.

There’s now also suggestions for day trips out of the area, too.

For the first time since creating our list of some of the running events around Turkey, it’s looking more certain that races will go ahead.

So promising, in fact, that registration is already open for many.

That meant we had to get cracking and bring our list up to date with dates, destinations, details and links to the relevant information for each event.

And, whilst I’ve been typing this article, it’s also been announced that Fethiye’s very own Yaşam İçin Yarış (Race For Life) will go ahead on 16th October 2022.

Here’s our updated list of running events around Turkey.

Whilst we’re all excited about the possibilities of more travel freedom, this year, our excitement when it comes to food remains firmly intact.

Not just for vegans and vegetarians but also for those of us who just love all types of food, we compiled our list of 50 favourite Turkish vegetarian and vegan recipes.

And anyone who knows us, knows we love Turkish pickled vegetables; turşu.

Well, in the month of January, we specialised a bit.

Rather than mixing vegetables, we shared our recipe for a real favourite: pickled red cabbage.

A perfect accompaniment to so many winter dishes!

And that’s about it for our January – and first week of February – roundup of news.

We’ll be adding to our Turkish recipes. And sharing some travel ideas, too.

Today, we’ve tried out a new (for us) eatery in town so we’ll be adding that to our list of places to eat and drink around Fethiye, soon.

And we’ve got lots of vague plans for ourselves for 2022, too. We’re daring to feel positive!

Before we sign off, we’ll leave you with this little Fethiye tale that made the national press in January.

This is how Cengiz Kocak (also known as Batman), manager of the cable car company that plies the route up and down Babadağ, gets home from work.

Why drive if you can fly?