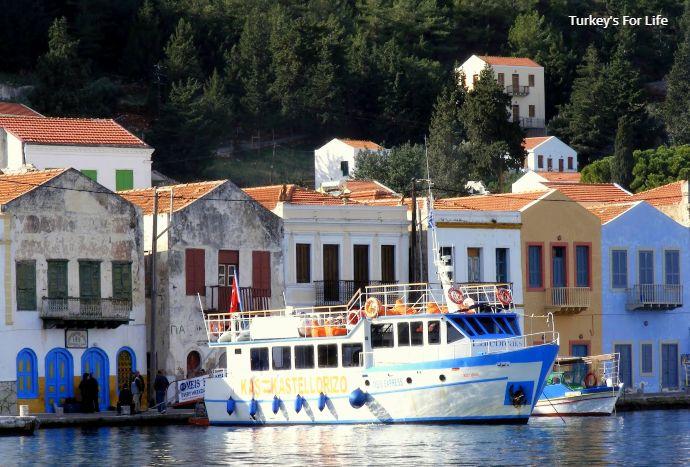 A day trip to the Greek Island of Meis (Kastellorizo), whether you’re on holiday in this part of Turkey or you live here, is an absolute essential as far as we’re concerned.

We wrote about Kaş a while back. A 20 minute sail from lovely Kaş and you’re in another world.

It’s a tiny island. The people are Greek. The buildings are Greek. But the nearest Greek island is Rhodes (70 nautical miles away).

And Turkey is almost within touching distance. Borders are funny things.

We’ve been going to Meis for years and have always used the same guy to take us there because he was recommended by a friend.

He used to take you across on a little fishing boat but times are changing and he now takes you there in 20 minutes aboard the Meis Express.

Not being a sea-faring bird, I much prefer this method of travel. Bigger and quicker.

And you can sunbathe on top in summer. Yesterday, we lounged on the bean bags.

Getting From Kaş To The Greek Island of Meis

So, this is the company we use to take us to Meis. Normally, we take the first bus of the day from Fethiye to Kaş.

Turcan (the boat owner) sends a car to Kaş bus station to pick us up.

I have no idea if this is a permanent arrangement but the company have now started a shuttle bus from Fethiye.

So yesterday, we got picked up from our local supermarket, taken to Kaş, across to Meis and back. And then we got a lift back to Fethiye.

This was 80 lira including our £10 visa fee. Bargain. Enjoy it while you can!

The man next to him is always around – something to do with the Late Breaks company that Turcan runs his trips through.

We think he must have have had an early start yesterday because he drove from Kaş to Fethiye to pick us up at 7:45am.

Now we reckon they have employed a new marketing guy.

Either that or all the staff were in a good mood because the weather was so good and we all got a Turkish çay before setting off.

We couldn’t have picked a better day yesterday.

Below is the view of Meis from Kaş as the boat pulled out of the harbour. We’ve never seen it so clearly before.

You can just about make out the buildings nestled into the hillside.

And I was a bit nervous about the crossing – you might have noticed I’ve mentioned it a couple of times recently. Well – just look at that flat, calm sea.

The smoothest crossing we’ve ever had.

We just sat back on our beanbags, sun on our faces and chugged along…

…leaving Kaş behind to head towards Meis.

Barry was a tad on the bored side as he likes ‘a bit of fight to his sea.’

As you can see, it was more like a lake yesterday and I was in my element. I’m more than happy to have as little ‘fight to the sea’ as possible.

Turcan was probably a bit disappointed too.

He told us about last Friday (when our friends sailed to Meis with him).

There was definitely a twinkle in his eye when he told us how good the 3 and 4 metre waves were!

After 20 minutes or so you suddenly arrive in the perfect, stereotypical Greek harbour that is Meis.

It resembles an idyllic setting from a holiday brochure – except this is definitely real.

The Rough Guide to Greek Islands describes the island as a place that you will either want to leave after one hour or you will want to stay for at least a week.

We’re definitely in the latter category.

We keep meaning to stay overnight during the summer months but we just never get round to it. Think that might have to be a 2010 New Year’s resolution.

This is the Meis Express that ferries you between Kaş and the island.

In the summer months, the path you can see along the harbour is lined with tables and umbrellas.

We normally go to these restaurants for a pork-fix (they do an amazing home-made Cumberland Sausage style Greek sausage). But yesterday, due to Christmas spending, we made do with a packed lunch.

Of course we still made sure we had enough Euros for a couple of the local, lovely, cold, refreshing Mythos beers. (Can you tell we like Mythos?)

If you like a bit of stroll round and a nosey (like we do) then you can head up and away from the harbour.

You then get some fantastic views of the island and back to Kaş in the distance.

Many of the houses on the island are now being restored to their former glory and there are some beautiful buildings.

The ferry you can see anchored sails to Meis from Rhodes a few times a week and carries cargo and passengers between the islands.

It always amazes us how it gets into the harbour – it’s massive!