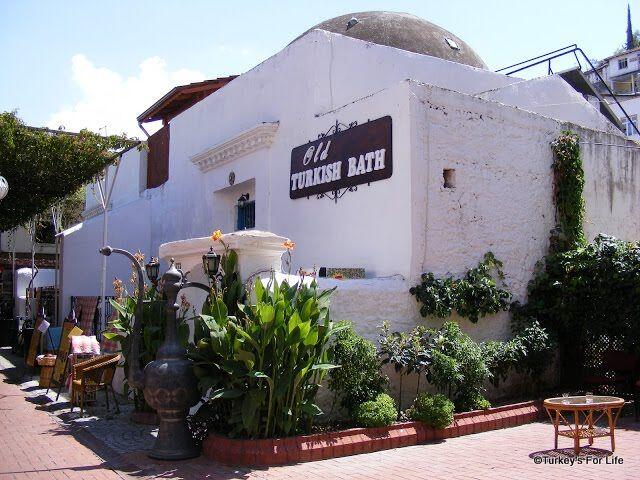 After 12 years of umming and ahhing about whether I could handle a visit to the hamam, I finally made it to one on Saturday. I entered a sauna in a gym many moons ago and had to leave straight away because I just hated the heat, so I always thought, ‘If I pay my cash and then have to leave because the heat is too much, and everyone will see me and it’ll be a big fuss, and I’m not keen on massages anyway…’

It’s taken a friend who was out this week to finally persuade me. She really wanted to go but didn’t want to go alone and I didn’t want her to go home without having been to the hamam and so now it’s done. Of course it helped that my friend paid for me, too!

There’s never any shortage of recommendations for which hamam to use in Fethiye, and we were supposed to be going to a different one, but we were sat at Deep Blue Bar, it was hot and we just decided to go to the old hamam in Paspatur. Of course, it being the old hamam in Fethiye’s old town, it is mainly frequented by tourists these days and is never recommended by Turkish friends. ‘Don’t go there. It’s old.’ They seem to prefer the more modern experience of the ‘under-the-hotel-hamam.’ But I’m glad we went to this one now as a first experience – Deep Blue, where everyone was waiting for us, wasn’t far away if either of us felt the urge to make a sharp exit.

As we entered, we were handed the traditional wrap-around towel and then, once we’d worked out where to change and where the entrance to the hamam was – I think it’s assumed you know what you’re doing – we went in and sat down on the marble seating around the edges. Neither of us knew what to do with the wrap around towel (we had bikinis on) so they just sat limply beside us.

The hamam is beautiful inside; marble floors, seating, and basins and traditional brass taps. I’m a sucker for an old building and a bit of history so this helped me to forget my initial light-headedness and shock at the heat. It’s a living piece of history in Fethiye and I was in my element. We were soon dipping the pots in the basins of tepid water and pouring them over us like seasoned professionals and it was all very pleasant.

Back into the reality and modern day world of August 2010 and some practicalities. In one of the side rooms, there was a family of four and another girl came in a few minutes after us. So obviously, we were a mixture of males and females – no tradition there then. Then the two men entered who were going to be doing the washing, lathering, and massage. (They’re called tellak).

First on the marble slab was one of the men from the family. Our faces must have been a picture as we watched the man get pushed and pulled around, scrubbed, stretched in all manner of directions, doused in warm water, then icy water – and then he shook the guy’s hand and said, ‘Thank you very much, that was great.’ I suspect a bit of testosterone (and a tiny bit of tom foolery!) here. It all looked horrendous and we felt like little lambs to the slaughter.

Ladies, if you’ve got a problem with men doing the ablutions for you, you can request a woman to do it so never fear. However, there was a woman before us and her Turkish bath experience looked much more pleasant than her husband’s and I didn’t have a problem with a bloke doing it – as long as he didn’t start doing manly things like cracking my fingers and yanking at my toes! It was all very relaxed and good fun. I must be suitably exfoliated, too, because I didn’t have loads of skin coming off me like everyone else seemed to have.

My friend and I were the last two people in there because each person leaves after they have been made squeaky clean. I was next and my friend was mouthing to me, ‘Wait for me. Don’t leave me in here on my own…’

As it was, there was nothing to worry about. These guys know what they’re doing. They know females will be worried and on the flip side, they know they have to cover themselves, too. After I was finished, I was told to sit down again and wait for my friend because we should leave together. I liked that. I enjoyed my first hamam experience too and will definitely go again. You do feel amazingly clean and soft as you leave. I’m ready and raring to go now – we might even sample a different one next time.