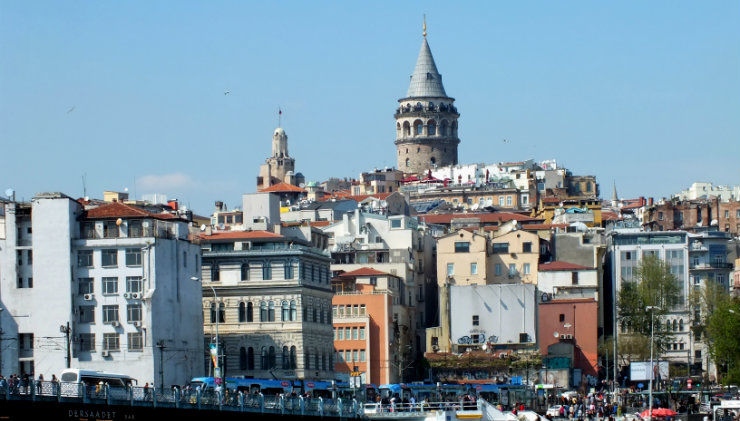 Galata: As a tourist in Istanbul it’s that place where you go to once you’ve exhausted the magnificent sights of Sultanahmet; Hagia Sophia (Aya Sofya), the Blue Mosque (Sultanahmet Camii), Topkapı Palace.

Should you fancy a stroll up the hill towards Beyazıt, the Grand Bazaar (Kapalı Çarşısı) and Süleymaniye Camii are always worth a bit of your time. Then you set your sights on that tower that protrudes above the more recent and 19th century buildings on the skyline. That tower that everyone takes photos of from the opposite side of the water, similar to the photo below. We can’t resist; it’s gotta be done.

And then you venture over the water – the Golden Horn – via Galata Bridge. This is where you hit the effervescent, overflowing, exciting world that is Beyoğlu. Karaköy, Taksim, İstiklal Caddesi. Istiklal is a (mostly) pedestrianised, crazily crowded street that runs through most of the length of the Beyoğlu boundaries and is packed with side streets that overfeed your enthusiasm. Can you tell we like Beyoğlu?

To get up and down the ridiculously steep hill that links İstiklal with Karaköy and the shores of the Golden Horn, you can jump on the Tünel funicular. If you’re feeling energetic, albeit downhill might be more preferable, you can walk. If you do walk, that’s where you’ll come across Galata Tower and the small neighbourhood of Galata.

We visited Galata Tower on our first ever visit to Istanbul back in 2004 (the views from the top are definitely worth your effort). Since then, even if we’ve stayed in Sultanahmet, we’ve always taken the intercity Fethiye to Istanbul bus followed by the free service bus to Taksim. That means we can make the early morning rucksack walk down Istiklal Caddesi, through Galata, across Galata Bridge and up to Sultanahmet. It’s a fair old trek with a backpack but we love it. That’s our we-arrived-in-Istanbul wake up.

The Galata neighbourhood, along with other parts of Beyoğlu, is an area we’ve loved because of the 19th century city apartment blocks. We love us a row of imposing, historic 5-6 storey, ornately carved, sash-windowed dwellings. Beyoğlu is rammed with them. Galata, with its oh so famous tower is a part of that. In April, instead of moseying on through and taking a few photos, en route to elsewhere, we got to ‘live’ there for a few days.

Getting To Know Galata

It’s not until you spend some real quality time in a neighbourhood that you really get to know it. Yeah, we’ve always loved the Galata area…but it has always been that area we strolled through, admiring Galata Tower for a few seconds before trudging on elsewhere.

This stay was different. And we loved the little corner of Istanbul that is Galata. Because we get to spend a few days in one of those truly stunning 19th century dwellings in an Istanbul Place apartment, that gave us the opportunity to live, to lounge, to breathe in the area. We’ve seen it in a whole new light.

Cities are a beautiful existence because they constantly reinvent themselves and you can see Galata changing right before your eyes – and, as with all changes, you’ll prefer some over others. We love what people like Istanbul Place are doing; refurbishing these amazing apartments, respectfully restoring previous elegant layouts, exposing original features wherever possible. It’s new life – and new love – for these buildings that deserve this care.

Despite Galata being a centuries old settlement, it’s current metamorphosis is one of a young vibe – a chilled out atmosphere where locals and tourists mingle. Of course, we were there in beautiful springtime weather and sunshine and blue sky helps a long way to happy-glow-feelings.

A couple of bars have popped up but at nighttime – again, both locals and tourists – people congregate on the steps at the side of Galata Tower. They sit and chat, some having a beer or two, some just enjoying the company they’re in. Behind this little gathering, the two restaurants serve a whole host of nationalities and charge what we think are very reasonable prices for their location, directly facing Galata Tower.

In the daytime, the queues for the tower, the passers by and the restaurant customers are all entertained by street musicians. Whilst we waited to meet friends one day, we had a band singing Romanian and Hungarian music. Another day, it was a one man show, just he and his guitar, expertly making his way through the Buena Vista Social Club collection. And all the while, people are passing through, eating, drinking, enjoying a bit of cafe society, grabbing a simit or famous local kokoreç, and queueing to get to the top of the tower.

Away from this central hub, Galata’s side streets, buildings stretching high on either side of narrow roads, are a mix of empty ground floor units, cafes, luxury kitchen shops, high end boutiques, grocery stores…a butcher’s shop right in amongst the boutiques.

It’s a real mish mash which is what we meant about seeing the change before your eyes. There’s metamorphosis taking place in Galata and the outcome isn’t clear just yet. You can’t help but worry for the butcher and the small greengrocers, but likewise, you can’t see how so many boutiques are going to thrive either.

Souvenir shops are sprouting up everywhere – they who sell pashminas, coasters and fridge magnets. Obvious that tourism is booming in Istanbul but something will give, here, too…at some point. There’s only so many coasters people can buy.

We All Love To Eat

But the world loves a cafe and these places seem to be doing good business with locals and tourists alike. Galata offers falafel bars, the usual array of döner kebab joints, seafood restaurants, places with varied menus and some specialising in Anatolian cuisine.

Cafe Privato, tucked away on a little side street, was packed with customers dining in leisurely fashion over their Turkish village breakfast. This is clearly the place to go for breakfast in Galata and we have to say, the breakfast was really good. You could share one breakfast between two if you’re on a budget because this place is not bargain bucket but the breakfast is substantial.

None of this is meant as a negative. It’s just observations of change taking place. It was actually the butcher who caught our eye as Tarkan, owner of Istanbul Place Apartments walked us to our apartment on our arrival.

“Ohhh, look at that sucuk hanging in the window.”

Local Living On A City Break

Boutiques galore and we get excited at the sight of spicy meat sausages dangling from a hook in the window. The butcher and the greengrocer were a stone’s throw from our apartment and it was they who benefitted from these two extra bodies in the neighbourhood.

Staying in an apartment meant we could do our tiny little bit for this local community and also relish in leisurely simit breakfasts with various spreads and cheeses and glasses of fruit juice each morning. And, as for the butcher, one of the souvenirs we brought back to Fethiye with us was a hunk of the sucuk that caught our eye on arrival. Yummy, chopped up on a pizza or Turkish pide.

Galata, it seems, has turned out to be the ideal location for us when we’re in Istanbul. A neighbourhood with its own personality. It’s close to public transport links and walkable to the nightlife and the street food Beyoğlu has to offer. It’s a quick hop down the hill to Karaköy Balık Pazarı (we love eating at this fish market) and a stroll across Galata Bridge to Eminönü and Sultanahmet. And meanwhile, the ferries are waiting to take you across to Kadıköy, Üsküdar and other areas of the city.