But never tastes the same wherever you go to eat. Each person who makes it has their own potato salad recipe.

And, over our years of living in Turkey, we’re quite comfortable with our own Turkish potato salad recipe after experimenting with different fresh herbs and dressings.

Each time we had potato salad at a friend’s house or at a restaurant, we did our usual of forking through it to see what was included (and omitted).

And now we have our own dish that we’re happy with.

We tend to use our Turkish potato salad to add to our meze table so we’ve got it in our category for meze recipes on the blog. But, in Turkey, many people also have potato salad as part of the Turkish breakfast table.

You really can’t beat a good potato salad at breakfast time. But, when we first saw it, we remember thinking it was odd, until we tried it.

On the Turkish gület cruise we did, the chef did his own Turkish potato salad recipe and placed it on the table, one day.

We were so happy to see it…especially when most of the other guests on the boat looked at it with confusion and left it well alone.

Potatoes with breakfast? Obviously not for them…and, obviously, more for us!

Potato salad is always a dish we make after we’ve been to any of the local Fethiye markets and spot a huge pile of baby new potatoes. We just can’t walk past them, for some reason, as they call out, “Buy me, buy me!”

This usually happens most often at the Friday village market in Fethiye.

Whilst we usually struggle to find potatoes big enough for our old faithful baked potato recipe at this pazar, baby new potatoes abound…sometimes.

(We like the village market because you’re never quite sure what you’re going to get.)

A lot of Turkish potato salad recipes you will see are usually for potatoes of any size, peeled and chopped into relatively small chunks.

As we like a small waxy potato, skin left right where it is, our recipe is more of a ‘new potato salad recipe.’

When you see Turkish potato salads, if there are any peppers present, they are usually green.

We love a bit of colour – and a bit of savoury sweetness, too, in our lives.

And the contrast between the red and the green of freshly chopped herbs looks so appetising so we always go for red pepper. 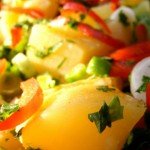 For The Potato Salad

For The Potato Salad Dressing

So there you have it. A simple, but very tasty Turkish potato salad.

We like to add the chilli flakes because, as you no doubt know, we love a bit of heat to our food.

And the sumac? That’s a spice commonly used in Turkish cuisine, especially where raw onion is involved. A splash of deep colour and a dry zesty flavour to go with moist lemon and olive oil dressing.

Here’s another little optional interesting addition, too, for your Turkish potato salad.

Many years ago, when we were first invited to a friend’s house for evening meal, one of the meze dishes she put on the table was potato salad. But it was like one we had never seen before.

Her potatoes were peeled and chopped and then boiled until soft.

The usual herbs, lemon and oil were present. But there was also another ingredient we’d never before seen in a potato salad – pieces of chopped egg.

All the ingredients were mixed in together and lightly compressed into a deep bowl.

While we thought it was a bit odd to see a potato salad like this, when we sat down to eat, we both agreed the eggs really worked.

We’ve seen eggs in potato salads many times since then so it’s a bit of a norm for us, these days.

As we said, we use waxy new potatoes so our egg addition is slices of egg on the side as you can see in the photo above. This works, too.

This is our take – it’s our Turkish potato salad recipe.