This twice baked potatoes recipe is right up there amongst our favourites.

The potato – oft described as ‘the humble potato.’ Nothing humble about them for us. We love and appreciate them to the full.

When I was growing up, baked potatoes (or jacket potatoes) were a much-looked-forward to, but rare, treat in our house.

When you’ve got two parents who both worked full time, guess the last thing either of them wanted to do was put some potatoes in the oven and wait such a long time for them to bake.

So, baked potatoes – most often just simply and perfectly served with salt and oodles of butter – were a constant on the annual Bonfire Night menu.

And then they were the occasional weekend treat, too.

Whichever kids were around (our street was full of kids), we’d all get a hot, buttery jacket potato.

Well, if you’re using the oven for one potato, guess you might as well throw a few in there!

And then, one day, my mum served up a twice baked potato with cheese.

She was neither a keen nor an adventurous cook. So where on earth she got this recipe, I have no idea.

But it was a revelation!

I’ve been making them ever since with a few (but not too many) little extras.

Our Twice Baked Potatoes With Cheese

It’s fair to say, these twice baked potatoes do take a bit of time. Hence the weekend reservation for them.

And they take time because our baked potatoes are exactly that – baked.

In an oven. Not a microwave in sight.

We don’t own a microwave. But even if we did, our twice baked potatoes wouldn’t be even getting a sniff of it. Sacrilege.

So, our potatoes are going to get a good scrub. And a few piercings here and there with a sharp knife.

This allows the water inside to be released and makes for a fluffy centre and thick, crisp potato skins.

Your potatoes will take around 1 hour 40 minutes to bake, depending on size.

Once they’re cooked, you can remove them and start your filling process.

Leave the oven on, turned to the highest setting.

Cut each of your potatoes in half, lengthways.

Then use a fork to scrape the fluffy potato into your cheese mixture so that you have empty potato skins to act as a boat for your filling.

Mix all the potato and cheese mixture together, well.

And now you can start to spoon the mixture back into all of your potato skins.

Don’t worry if the mixture is piled slightly higher than the potato skin. Squash it down as much as you can.

We like to fork over the top of the filling to rough it up a little as you can see in the photo below.

The dark crispy bits after cooking are the best!

And now all you need to do is put your potatoes back onto the oven rack and place them back into your very hot oven on the top shelf.

Wait a few minutes until your topping is sizzling and crispy. Then remove your twice baked potatoes, ready to eat.

Serve Up Your Twice Baked Potatoes

Perfect to eat as a weekend main meal in front of the TV, as a side to grilled köfte, şiş kebabs or other grills.

Or just as an addition to a buffet.

Mmmm, who doesn’t love the crispy bits on top of the twice baked potato?

The twice baked potato is a double-winner for us. With a jacket potato, we love to eat the potato first, saving the skin – the best bit – til last.

With the twice baked potato, we’ve got the winning crispy topping treat first.

And then we can work our way through the rest of the soft cheesy filling until we get to the skin again.

Oh, and don’t worry if you’re too full to eat the skin. Leave that for the day after.

A splash of olive oil over it and whack it under the grill for a few minutes until sizzling.

Eat it as it is with a bit of salt. Or put some yoghurt or sour cream in the there. Seriously tasty! 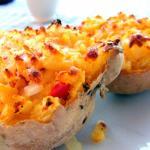 This twice baked potatoes recipe is a real weekend treat and well worth your time. Crisp, crunchy potato skins are stuffed with cooked potato, cheese, onion and red pepper before being baked for a second time. Perfect food to share with friends and, in the UK, a perfect Bonfire Night treat.Serve twice bake potatoes as a side dish, as finger food or as a main meal, depending on the size of your potatoes.Don't forget to experiment with different fillings, too.
Course Side Dish
Cuisine British
Prep Time 15 minutes
Cook Time 1 hour 45 minutes
Total Time 2 hours
Servings 4
Calories 450kcal
Author Turkey’s For Life