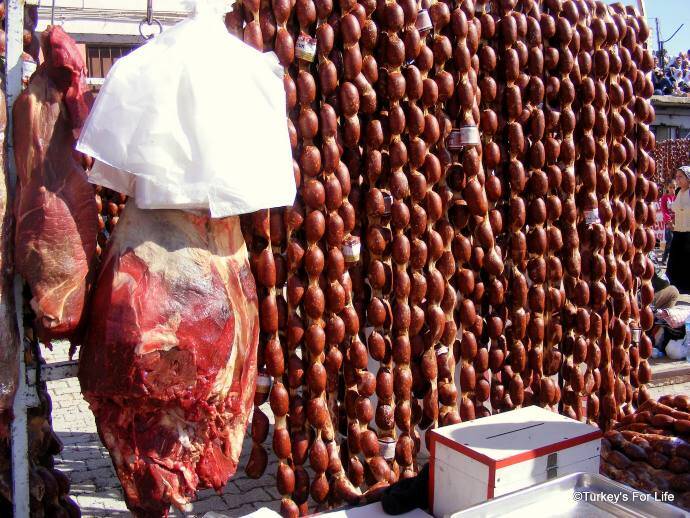 Today was the 2nd Karaçulha Camel Wrestling Festival, just up the road from where we live. With just a 10 TL entrance fee and proceeds going towards the local school, we would have been negligent not to go again. Last year, we entered the ‘arena’ (read ‘spare land’) with trepidation and a little excitement at being able to witness an Aegean Turkish tradition we had never before seen. And we’d heard there could be camel sausage served up too…

Last year, we were all shocked and surprised that there would be camel wrestling in Fethiye. So, when we wrote the post, we were fascinated by the actual camel wrestling bouts. However, this year, we found ourselves talking about what we were going to eat once inside. When we got out of the car, the majesty of these beasts still took me aback. They command your appreciation and attention – especially when they’re all waiting in the car parking area.

We arrived early so, once inside, the food stalls, all using charcoal barbecues to grill their meats, were only just beginning to cook for the expected crowds.

The stall above was cooking red meat, which, when fried up and placed in a half bread, resembled tantuni kebab. We guess it was çoban kavurma, of the type served at Kırkpınar Restaurant in the mountains above Fethiye. Köfte was also widely available.

Tempting as the kavurma and köfte looked, especially once the smoky, charcoaled, meaty aromas were wafting through the air around us, we hadn’t come for that.

We were there for the sucuk. But when you go to a camel wrestling event, it isn’t dana sucuk (beef sucuk) that gets placed between your half-bread for your enjoyment.

No. This is camel wrestling. These food stands are specialising in deve sucuk. A spicy sausage of cured camel sausage. That was what we came for; a camel sausage half-bread.

We all had half an eye on the food stands while we were watching the camel wrestling bouts and were trying to work out what exactly was going on. Food simplicity is always the best.

Eventually, our friend looked at his watch and suggested going for some food. It must have been on all of our minds because, without speaking, we were at one of the food stands in no time.

Long slithers of camel sausage were browning and sizzling over the hot coals beside grilled köfte. We ordered 4 half-breads of deve sucuk. With impressive deftness, the half breads were cut through the middle and placed bread-side down on the griddle to soak up previous meat juices.

Within seconds it was scooped from the griddle. A generous serving of deve sucuk was dropped between the slices. Then salad and crisp, strong-tasting, raw onion was thrown over the top…

The bread was slapped closed and paper was wrapped around the bottom before being thrust into our waiting hands. Money was taken, change was given. The whole process took less than a minute.

You can’t see in the photos, but the guy in the blue shirt was turning sucuk and köfte with his right hand. His left hand was gripping a wadge of notes as he was also in charge of the monetary transactions.

Verdict: Camel Sausage is highly recommended, especially when it’s as spicy as ours was!! A half bread was 5 TL (about £1.80). A kilo of deve sucuk to take home was 20 TL per kilo (about £7) at the time of writing. Good value all round!