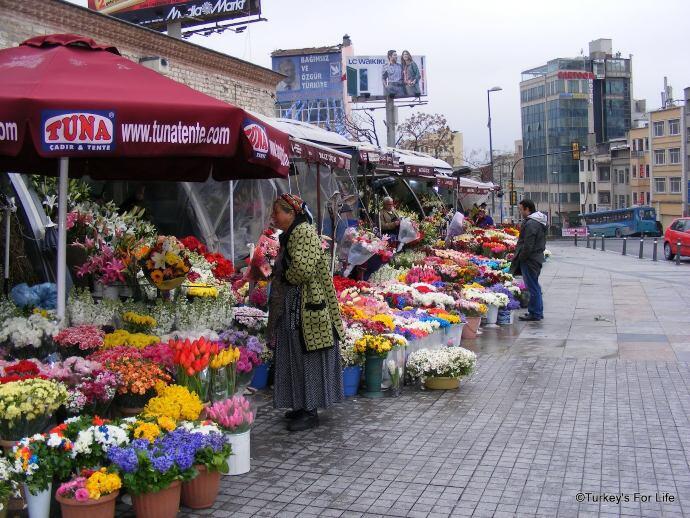 On Monday, we posted that in a couple of weeks time we will be flying to Rome from Istanbul. Albeit a very fleeting visit, it does mean that we’re going to be able to squash in a bit of time in our favourite city before we fly and we’ll be staying overnight, somewhere around the Taksim Square area.

Taksim, The Heart Of Istanbul

All cities need a main centre. That point in the mass sprawl that everyone is familiar with. In Istanbul, this centre is Taksim Square. Before we’d ever been to Istanbul, we had romantic images of mosques, minarets and the Grand Bazaar. So we were a bit dazed and confused, to say the least, when our service bus pulled to the side of the road in Taksim Square and told us it was time to get off. Welcome to Istanbul!

Taksim Square is not so much a grand, open city space as a huge noisy mishmash of multi-laned traffic (none of which stays in lane); bus stops and buses (all roads lead to Taksim Square it seems); advertising hoardings covered in neon lights; flower sellers; ultra-modern, glass tower block hotels; hotels, coffee shops and cafes housed in neoclassical buildings; swanky offices; trendy bars, the Atatürk Culture Centre…and, of course, Taksim Square is also home to the row of tiny food stalls that keep the hungry crowds of Istanbul topped up with the Taksim Islak Hamburger, a foodie treat not to be missed (according to Barry, that is. I stuck to döner kebab that day).

For us, Taksim Square is the epitome of the phrase ‘assault to the senses.’ At first sight, you think, “What the…?” And because of this, you become strangely attached to the place.

But Taksim Square also has huge symbolic significance in Istanbul. It’s the symbol of the modern, secular, Turkish Republic headed by Mustafa Kemal Atatürk. And amongst all the hectic goings on described above, it’s the Independence Monument that stands proud, right in the centre.

Independence Monument is double-sided. One side shows Mustafa Kemal as a soldier leading his troops while the other shows the victorious Mustafa Kemal Atatürk suited up as leader of the new Republic of Turkey. The soldiers either side are bearers of the Turkish flag and represent the Turkish army.

Probably the most famous street that leads to Taksim Square and the İstiklal Anıtı is the mesmerisingly-crowded İstiklal Caddesi (Independence Avenue). Naturally, this is the route of the many demonstrations in Istanbul. Hardly a weekend goes by without numerous groups of protesters chanting their way along Istiklal Caddesi before finishing up in Taksim Square. Their causes are many and varied and they happen so frequently that many go unnoticed.

The vast majority of first-time visitors to Istanbul are there to hit Sultanahmet. We all want to marvel at Aya Sofya, the Blue Mosque (or in our case, Süleymaniye Camii), historic hamams and the Grand Bazaar. But for us, the heart of Istanbul is most-definitely Taksim Square with Istiklal Anıtı at its centre.

Bleary-eyed after a night on a bus from Fethiye, this was where we first set foot on solid ground in Istanbul. And while it definitely wasn’t the most gentle of introductions to a city, this is the centre we’re now drawn back to each time we go to Istanbul.