Regular readers will know that we have a bit of a fondness for the Turkish intercity buses; they’re our favourite mode of transport for getting away from Fethiye for a short while to explore pastures new.

Back in June, we wrote about the experience of the night bus from Fethiye to Istanbul, a journey we’ve done numerous times. The Fethiye to Izmir bus is a less daunting journey for those who don’t fancy a night’s sleep on a bus seat! 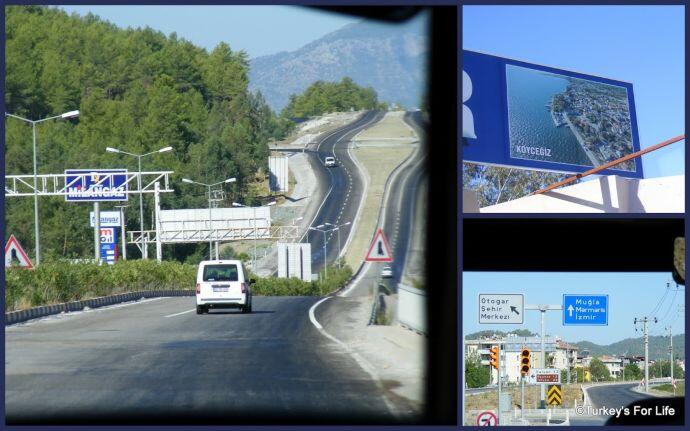 The main difference is that our journey to Izmir is during daylight, so we get to see the scenery of three different regions of Turkey: Muğla, Aydın and Izmir. Our official journey time is also only 5 hours which is a short hop compared to the 12-13 hour Istanbul journey.

It’s 9:30 am and after leaving Fethiye Otogar, we head out along the beautiful stretch of road with the not-very-beautiful name, the D400. The bus cruises along almost empty roads, passes Göcek, and we’re served with drinks of water before stopping at three otogars – Dalaman, Ortaca and Köyceğiz – in quick succession. 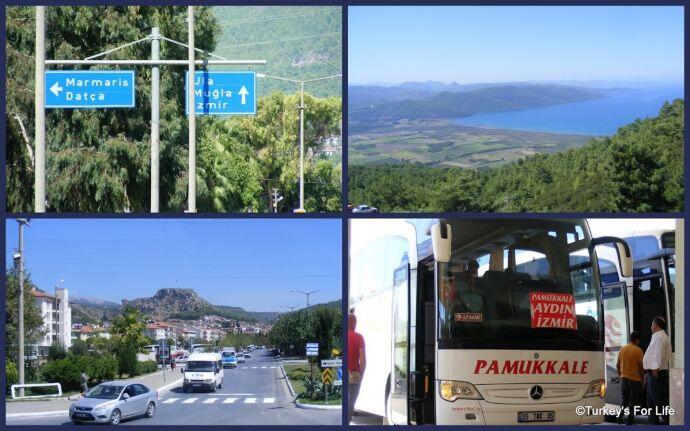 Take in the scenery from the bus window

We stay on the D400 and now it’s onwards to Muğla, passing the turn-off for Marmaris and  Datça along the way. More people onboard now, and this time we’re served with a choice of tea, 3-in-1 coffee (that of the super-sweet variety), cola, orange or fruit juices. We opt for the super-sweet coffee and wince as we take that first sip. It’s tradition.

Now the bus starts to climb and wind its way carefully around the hairpin bends that cling to the side of Sakara Tepe. This is the wonderfully high road that passes the turn off to pretty Akyaka and gives us the amazing view of the Gulf of Gökova before taking us towards Fethiye’s administrative city, Muğla.

We’ve got 20 minutes at the otogar so we get off for a leg-stretch and, as we’re roughly half way through our journey, eat the sandwiches we brought with us. 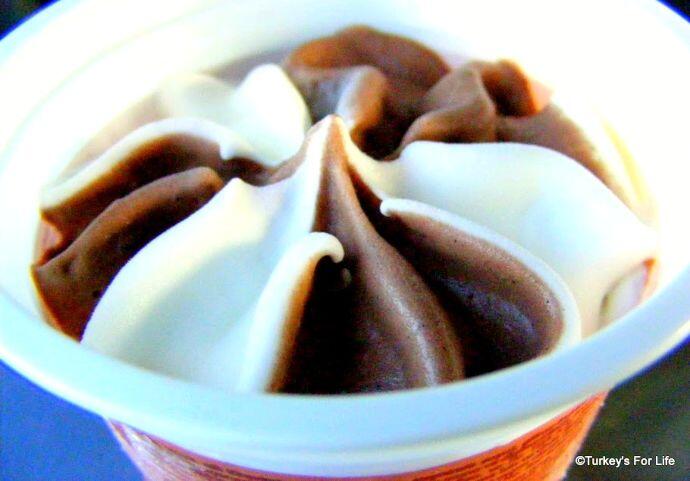 An ice cream treat between Fethiye and Izmir

Back onboard the bus – and what’s this little unexpected surprise? It’s always a bit of a lottery what you get served with on a bus journey – but we’ve never had this. But it’s daytime, it’s summer. What a great idea to serve your passengers with tub of chocolate and vanilla ice-cream! This made our day, this did! 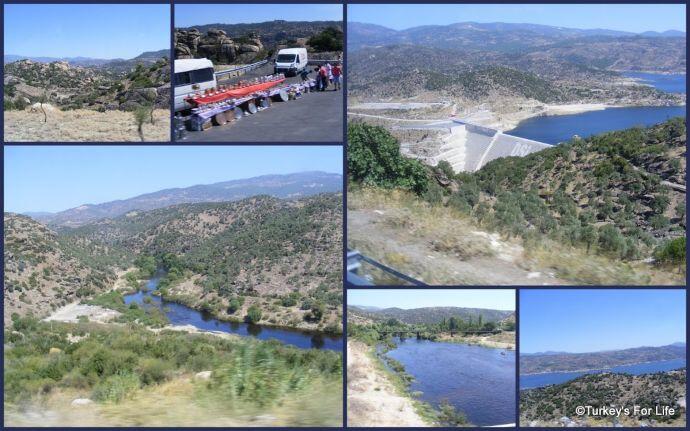 The D400 has now become the D550 Aydın to Muğla Yolu. Although still vast and scenic, as we head towards the city of Aydın, our surroundings are less mountainous. Rocky hills, rivers, streams, the Topçam Dam and roadside traders are what keep these two passengers interested as we head up the west coast of Turkey. Well, that and another super-sweet coffee; this time served with a packet of marble sponge cake. 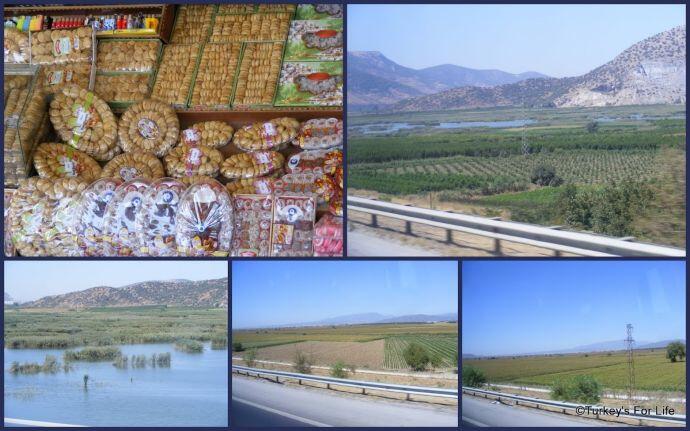 Aydın is famous for its figs

Welcome to Aydın, famous Turkey-wide for growing figs. If you’re a fig fan then this 20-minute stop at Aydın otogar will give you time to stock up.

We’re not fig fans so it’s a quick photo, a leg-stretch and back on the bus for the home straight. We’re nearing Izmir and we’ve gone from mountains to hills to flat, fertile plains, most of which are growing corn. 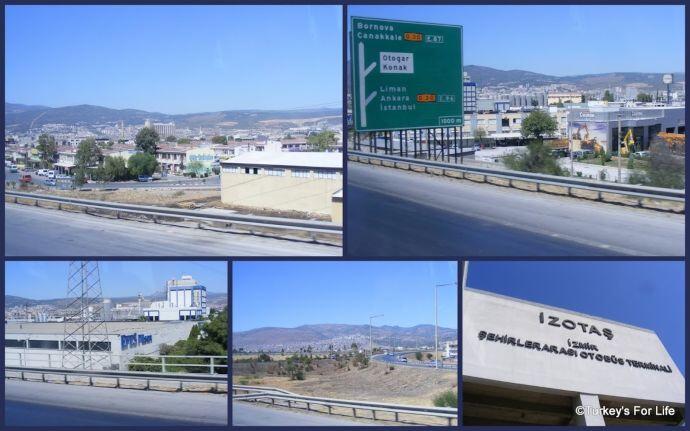 And then the clues that Izmir, Turkey’s third largest city, is close. Agriculture makes way for industrial estates, factories (rather apt that we caught a quick shot of the Efes Pilsen production plant!) crowds of high-rise apartments blocks in the distance.

The bus swings into Izmir’s otogar. It’s big. 74 platforms big. Now we just have the small task of wandering around this mammoth, concrete transport hub with the aim of finding ourselves a bus to take us into the centre. Let the fun begin.

Very interesting to find this, my wife (Lesley) is currently en route to Izmir via bus. Even more interesting is that she was witnessing at Özgūr's wedding yesterday and attended Ozlem's meal do this week. Had she known I'm sure there would have been many questions! Small world.

Ha ha, a small world indeed. Would think the bus from Fethiye to Izmir is still the same system with perhaps an increase in fare since this post. :)

Hello, I'm planning to go to Fethiye next week.. I'll be in izmer first.. I'm trying to find a good bus for this trip!! Can u recommend me some!! With English website because all I found were only in Turkish language:( also I want to go to the blue lagoon odunize beach, that's my distanation .. How can I get there! Is it by the same bus or I need a taxi!

Most of the intercity bus companies make multiple trips in one day from Izmir to Fethiye so you should have no problem getting one. If you are travelling during Bayram (after Ramadan has finished), make sure you book in advance as lots of Turkish families will be heading to Fethiye for holidays. You might struggle to book online as many of the companies only accept Turkish credit cards, hence the lack of English. However, there are lots of bus offices dotted around towns and cities - you can book and pay in advance there and they will give you a free shuttle service to the bus station in Izmir. When you get to Fethiye otogar (the bus station) from Izmir, there is a dolmuş (white minibus) that passes the otogar every 5 minutes, going to Ölüdeniz. The cost is 5TL and the journey takes about 40 minutes. Hope that helps.

@ Sophie: Actually, we must mention the lemon cologne next time we use the Turkish buses. Not had it for a while. Forget the ice cream. ;)

Love taking the bus in Turkey. Especially the lemon cologne :)

@ Liv: Glad we have another fan of the Turkish bus services in our midst. We can't get enough of them. :) Hope you're enjoying Australia.