Mooching about around Fethiye boatyard is a regular pastime for us. We often stroll along the Karagözler, going nowhere in particular, and find ourselves photographing the gülets, daytrip boats and luxury yachts that have come in for repair and general maintenance. It’s such an interesting place.

The Fethiye boatyard isn’t for everyone. While it’s nowhere near the size of the İçmeler boatyard near Bodrum, it still occupies a most attractive corner of Fethiye’s coastline.

You never know what you’re going to get as you pass by; the intoxicating whiff of varnish, gloss paint, a quick blast of sawdust as the workers sand down the woodwork, or even just a Turkish pop song blasting its tinny sounds through cheap speakers.

No, it’s not for everyone, but for us, it’s a part of Fethiye, and a much-loved one at that.

A couple of weeks ago, we once again found ourselves around this area. We were actually going to walk around Fethiye peninsula again for köfte ekmek by the sea, but we weren’t sure of the dolmuş times for coming back.

We walked as far as Aksazlar Koyu, started to debate the existence of the dolmuş at all during the low season (one actually passed us later on) and turned back. But we had köfte ekmek in our heads! That was why we’d left the house in the first place! Where could we eat a good köfte ekmek?

We could have gone to a cafe, lokanta or restaurant, but that would have been eating out for eating out’s sake. It wasn’t really what we had planned.

A very simple köfte ekmek by the sea. It was in our heads “We’ll try the places around the boatyard,” said Barry, striding off, back towards Fethiye. Well, those places might be by the sea, but that wasn’t really what I had in mind, either. I was dreaming of idyllic as opposed to gritty industrial. 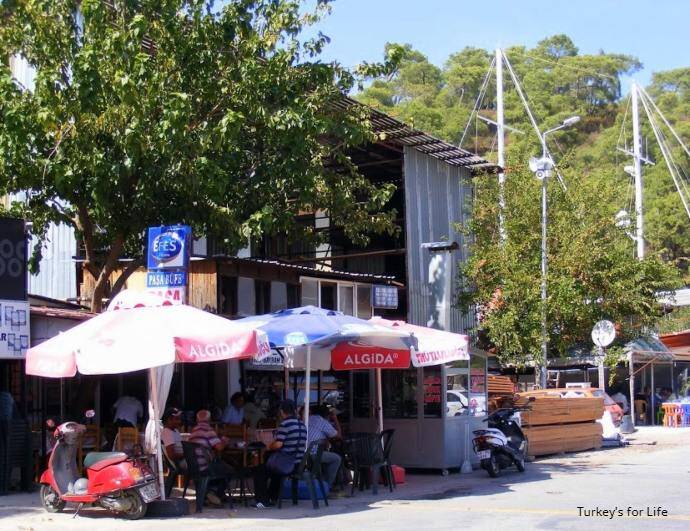 We walked through the boatyard – it was lunch hour. Grufty workmen were climbing down from their work stations and taking their seats amongst the industrial machinery of the eateries that serve the area.

We plumped for Paşa Bufe and sat at an empty table. Quite what the workers thought about a couple of foreigners plonking down amongst them is anyone’s guess – especially when one of them is of the female variety. We don’t linger over things like that.

The waiter came. Smiles all round. A good start. There was no menu but we’d seen they were advertising kömürde köfte ekmek (köfte cooked over coals and served in a sandwich).

We ordered what we had left the house for, ordered an ayran for good measure and sat back to enjoy the scenery. Remember, we wanted köfte by the sea.

And as you can see in the photo, we got köfte by the sea. Our half bread was delivered, along with a carton each of ayran.

The ekmek was huge – this was a workman’s ekmek! Chattering behind us as crowds of workmen wolfed down their lunch while simultaneously checking the runners and riders at the races. Phone calls made, discussions over, bets placed and straight back to work.

And us? Well, we were certainly full – and supremely contented. We can only compare this köfte ekmek to our favourite one we used to have a long time ago, when we first moved here.

We would sit with a friend in his office and köfte ekmek would be brought to us. One day, we went along to order the food for everyone. That particular köfte ekmek was from the Fethiye sanaye (an industrial area where all the mechanics’ garages are situated.)

The moral of the story? Same as the UK – and no doubt many other places around the world. If you want a fantastic, no-nonsense, quality meal, follow the workman. It’s not going to be pretty, but your food is going to really hit the spot!

Paşa Bufe is at the end of the 2nd Karagözler, by the boatyard. We paid 5 TL each for a köfte half bread and ayran.

@ Miss Footloose: Well the way we see it, if it's good enough for the workmen, we know we're going to be full. And the views in Fethiye are never too bad. :) Hope you find your next adventure soon.

Enjoyed your culinary tale, Julia! And you are quite right: Follow the locals, eat where they eat, even if it's not in the most idyllic settings (for which you would probably pay one way or another).

(We moved to the US last month, but looking for other adventures!)

@ Tiny Girl With Big Bag: Fortunately, we've never had that problem in Turkey. I guess we've always chose our street food wisely - either that or we're just lucky. :)

@ BacktoBodrum: It's just the best isn't it. Wish more restaurants would keep it simple. :)

True, best food is always at the hidden places.. you can eat extremely well, or can have the other extreme, when you are stuck to the bathroom for days. But worth a try ;)