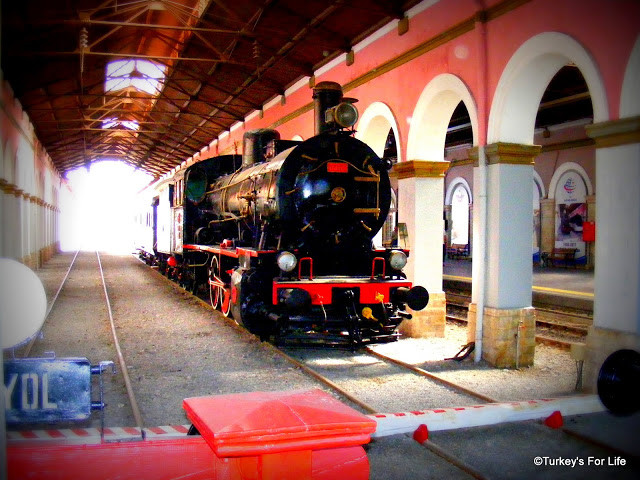 Today is Cumhuriyet Bayramı (Republic Day) in Turkey, so this post seems quite apt for the occasion. Republic Day commemorates the proclamation of the Republic of Turkey in 1923 when Mustafa Kemal Atatürk became the first leader. For today’s post we’re heading back to Izmir and to Alsancak train station.

And how does this relate to Cumhuriyet Bayramı? You may remember that when we booked our apartment in Alsancak, our host had told us to wait at Alsancak train station and he would come to meet us there. We phoned him on arrival and had ten minutes to kill while we waited.

We mooched around and, lo and behold, Alsancak train station turned out to have a couple of unexpected little finds that we were not expecting.

Izmir is widely accepted as Turkey’s most secular and Western leaning city, so we shouldn’t have been too surprised to see Atatürk’s railway carriage on display, outside of the station. There wasn’t a lot of information about the carriage; the main points being that this was the carriage Atatürk used to travel around Turkey and that it was last restored in 2007.

We would have enjoyed a little look inside but that doesn’t seem to be the purpose of this particular display. Look but don’t touch.

But it was the feeling of nostalgia that came over us as we walked along the exterior of the carriage.

Britain is packed with old trains and train enthusiasts. We took all that for granted and now, we live in Fethiye, surrounded by high mountains and no rail links.

The old entrance to Alsancak Station has an equally nostalgic feel to it so we couldn’t help but slip through the doors to take a peek inside. And we certainly weren’t expecting this!

Wow! Before coming face to face with this beautiful creation, we’ve got no idea how long it was since we had seen a steam train.

Again, we’ve seen them chug, chug, chugging along through various parts of the UK countryside; even been on a miniature one in Cumbria, but, despite acknowledging their beauty, we weren’t really too bothered about them and we still took them for granted. Is it our age or the fact that we hadn’t seen a steam train for so long?

Whatever it is, it was such a pleasure to stumble across this grand old steam train in Izmir.

Before heading somewhere new, expectations and preconceptions always fill the mind. Sometimes, when we travel elsewhere in Turkey, many things are as we expected they might be. Izmir was different.

Prior to going, the only photos we’d seen of the city centre were of the Izmir clock tower. In person, when driving through en route to elsewhere, we’d only seen aesthetically unappealing high rise apartments.

We weren’t expecting too much from Izmir, to be honest, but all that was blasted away even as we were just waiting to be met on arrival. And this was just for starters!

Amongst other things, we’ve already written about our experiences of eating söğüş and drinking the wonderfully smooth Izmir Turkish coffee, but we have many more posts to come from our few days in Turkey’s third largest city.

Izmir has two railway stations: Alsancak and Basmane. Nearby Basmane station runs services that will take you to places like: