We know that Turkey is famous for its street food and Izmir is a great city to be in if you’re looking to sample lots of street food treats.

When we first visited, we were in the city for six short days and were on a mission to eat, eat, eat. Purely because so many friends had enthused about all the different dishes. The famous Çeşme kumrusu had been recommended to us and was indeed, very tasty (and filling).

Söğüş, rather surprisingly, had not been recommended to us but we saw it everywhere so we just had to sample it.

And we’re so glad we did! Don’t miss it if you go to Izmir. And then there’s midye dolma – Turkish stuffed mussels!

Mmmm, stuffed mussels; are they the king of Turkish street food? Yeah, we love a döner kebab or a çiğ köfte dürüm. But it’s sooo difficult to walk past the midyeci in Izmir.

All over coastal Turkey, you’ll see street sellers wandering up and down with huge baskets filled with the shiny, black shells, wedges of fresh juicy lemon and paper serviettes.

But we’d been told, and had read, that Izmir is in league of its own when it comes to midye dolma.

We’ve eaten many a mussel in Fethiye, so, of course, we couldn’t return from Izmir without having put their stuffed mussels to the taste bud test. Just wow! 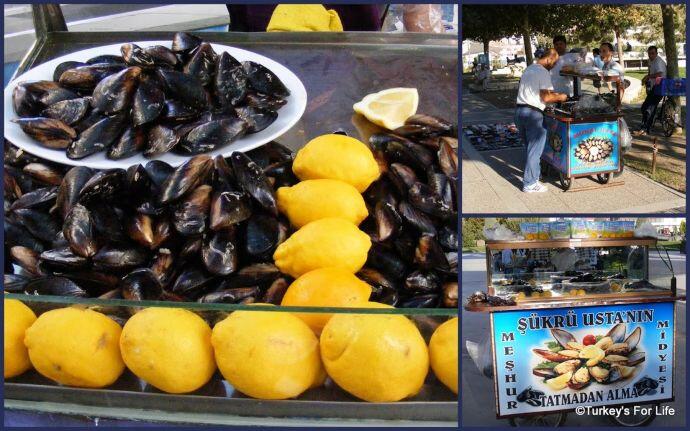 Stuffed mussels are ever present on the streets of Izmir

When it comes to Turkish street food, midye dolma is almost a national treasure. And that’s despite the fact it faces constant negative press.

Many people, especially tourists, are wary of eating stuffed mussels on the streets for safety reasons. And yeah, you do have to be careful.

We all know about the risks of allergic reactions and food poisoning caused by mussels. In the end, it comes to down to personal choice as to whether you eat them or not.

We choose to eat them. We choose carefully and, thankfully, have never once been ill from them.

As we walked around Alsancak and the streets of Kemeraltı, we could see midye dolma carts everywhere! All along the kordon and around the historic Izmir clock tower, stuffed mussels were for sale in carts, and trade was always brisk.

If we are going to eat midye dolma, we want to see mussels on the move! We want to see people standing around the cart eating one after the other; the midyeci preparing each mussel as fast as the customers are eating them.

It appears the people of Izmir – the Izmirli – love to eat the street food their city is famous for. And, if it’s good enough for them, it was certainly going to be good enough for us.

But rather than stand at the cart, eating one after the other, we decided to make a meal of it.

How To Eat Stuffed Mussels 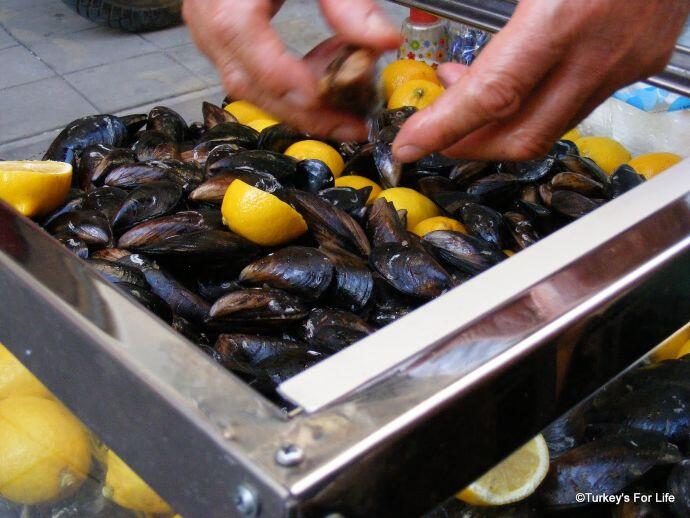 Our stuffed mussels being prepared

We always manage to find a little haven whenever we travel elsewhere in Turkey. A bar where we get settled and feel comfortable, even just for the few days we’re there.

We were staying in the Alsancak area and there’s endless choice of bars around there. It didn’t take us long to settle into a favourite bar, tucked away just off Kıbrıs Şehitler Caddesi.

And each evening, the bar staff and customers would come out to greet him and buy platefuls of mussels to eat while they were drinking. He was obviously a regular.

The same staff were always at the bar again the day after, so they had eaten the stuffed mussels and lived to tell the tale. This was going to be the mussel vendor for us.

One evening, we stopped him as he was walking by and ordered a plateful of midye dolma. A choice of medium-sized or large mussels, we opted for large. A few lira bought us a plate of 20 of them along with plenty of fresh lemon wedges. 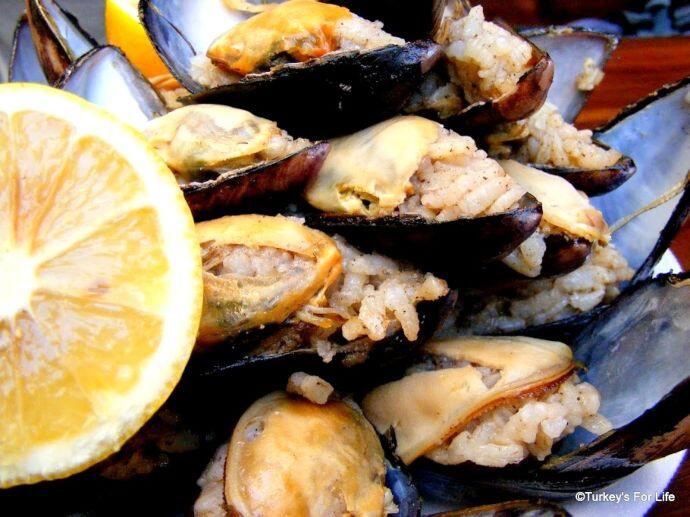 Time to eat our stuffed mussels

When you eat midye dolma, no utensils are necessary. Your shell is your scoop!

The midyeci pushes the wide end of the shell underneath the rice-stuffed mussel, between the flesh and the bottom shell and passes you the foodie treat.

Now, all that’s left for you to do is continue the process. Pushing the shell a little further until the mussel detaches and lands perfectly into the top shell, just like using a spoon.

A generous squeeze of lemon, tilt your head back and drop the mussel into your mouth. Food heaven quickly ensues! 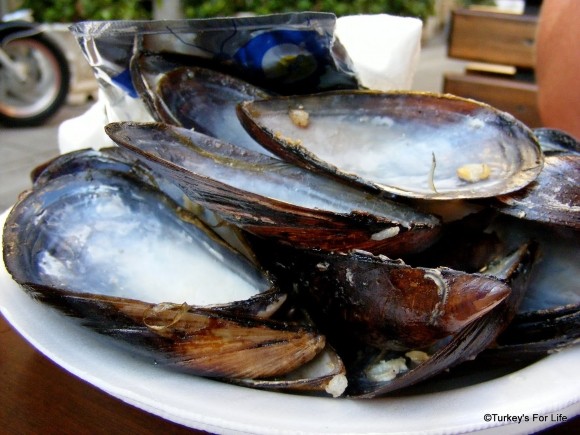 A plateful of midye dolma washed down with a cold beer or two and we were in Izmir bliss. It didn’t take long before before our plate contained only a pile of empty shells. And we managed to write this post…so we also lived to tell the tale.

When it comes to mussel dishes, stuffed mussels (midye dolma) is definitely up there for us. The larger the mussels, the better. And that’s where Izmir came into its own.

Lots of people like to make Turkish midye dolma at home because they enjoy eating them on the street so much. We recreated nohutlu pilav because we had such happy memories of eating it in Izmir…but stuffed mussels?

Hmm, we think we quite like to leave those where they belong; in the cart of the midyeci on the streets of coastal Turkey, waiting to be eaten by hungry customers…

Lovely street food - thank you for linking back to my Midye Dolma, Stuffed Mussels recipe, it was great fun making them at home and well worth every effort!:) Ozlem x

You're welcome, Ozlem. :) We do love stuffed mussels but not sure we've got the patience to sit and prepare them at home - guess because we know there are always mussels for sale somewhere around town. :)

@ Renee: Mussels anywhere! They're all yummy - if you can brave it. :) The ones in Fethiye are sold throughout summer just in baskets. we've munched our way through all of them and been okay - it's just the risk is always there. :)

Most of the vendors I saw had shallow trays of mussels right out in the sun with no visible ice. They didn't look appetizing at all, but the ones in your photos looks incredible.

So I guess my family & I need to return to Turkey and try mussels in Izmir. Then we have to come back to Fethiye and have spinach with garlic & yogurt sauce from the place across from the autogar. I had it on our last day in Fethiye and am still haunted by it because it was SO FREAKING GOOD!

Hope you two are doing well!

@ Shtina25: Yes, quite common for the midye dolma to be brought in from outside. Restaurants that do this probably have known vendors they use as in our case in Izmir.

I love Turkish stuffed mussels! These were the first food item I recreated when I got home from Turkey:

At one restaurant where we ordered a plate of them, a cook ran out to a street vendor, bought a bunch and then served them to us. :) I guess the street ones are safe!