Back in January, we did a recipe for the classic Turkish dolma recipe, biber dolması. In that recipe, green bell peppers are stuffed with a rice filling and then simmered until the peppers are soft.

Well, as we’re such big fans of stuffed peppers, we thought we’d share another recipe for them, except this time, the peppers will be baked and the filling will be fine bulgur wheat rather than rice. This is the same type of bulgur that is used in dishes such as Turkish kısır and mercimek köftesi. 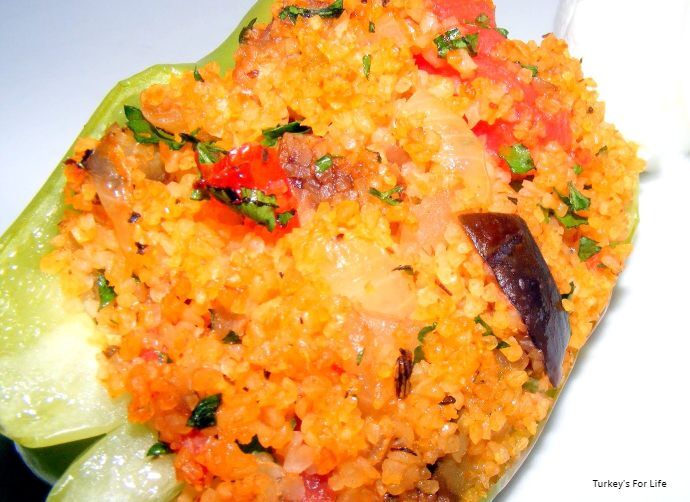 This recipe makes seven bell peppers. You can either cut the peppers in half, lengthways, and serve them open (as in the photo above) or you can cut off their lids, stuff them with the bulgur filling and bake them whole.

We did a mixture of both. Either way, scoop out and discard the seeds from the peppers.

We’re going for an Eastern flavour for this filling so it contains pine nuts, dried fruit and spices. 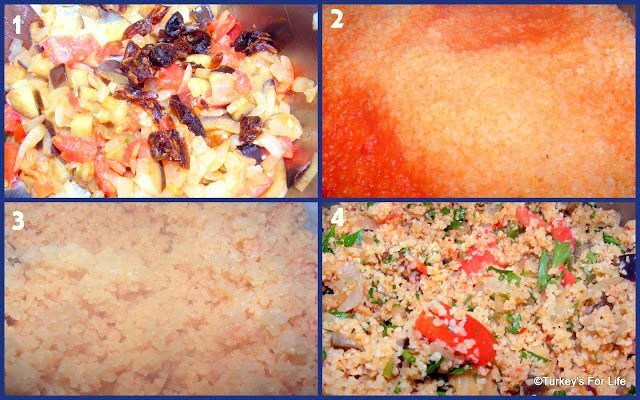 How to prepare your stuffed pepper filling

Now it’s time to add the filling to your peppers. Begin by preheating the oven to 220 degrees. 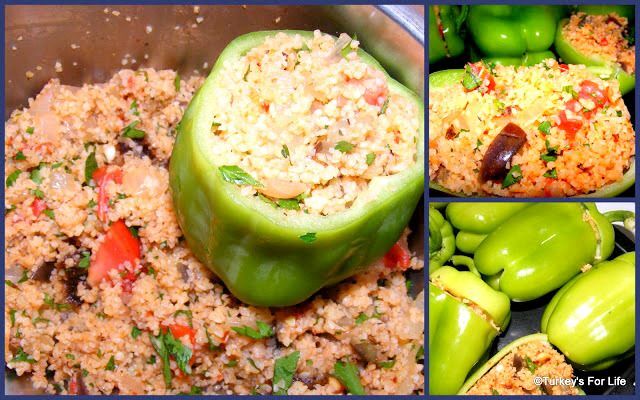 Some peppers are whole and others are halved

And, while the oven is warming up, add the filling to your peppers and place them carefully onto an oven tray.

Drizzle with a generous coating of olive oil and place them in the oven for around 30 minutes until the peppers soften. (Even better if they get a bit charred here and there). 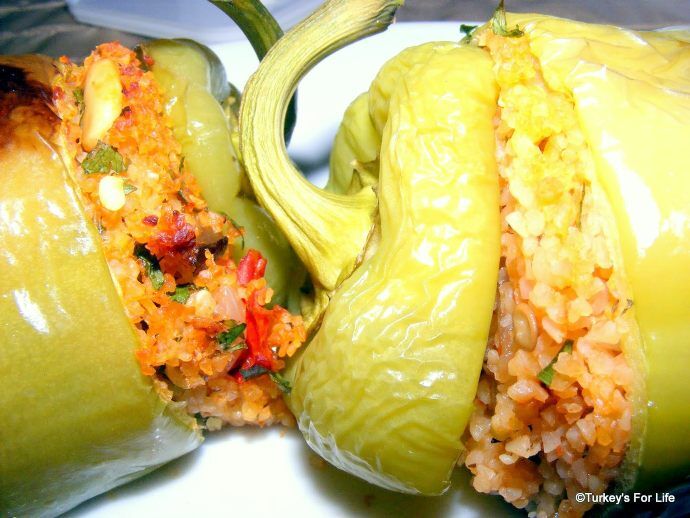 You can eat your stuffed peppers hot or cold

Serve your peppers warm or cold with a side of natural Turkish yoghurt. Fırında bulgurlu biber dolması also make a tasty contribution to your meze table, as a side to grilled meats.

@ Back to Bodrum: I always think stuffed peppers look impressive - they're great for parties if you've got a lot of mouths to feed. :)

@ Rambling Tart: Funny isn't what seems new and exotic when you're a child. I can't imagine seeing a stuffed pepper when I was a kid. :)

@ Collin Hart: Hmmm, not a cider drinker but willing to give that combination a try. :)

Absolutely delicious!! I remember when I was a girl in Canada that a visitor from the Middle East made this dish for us and I thought it was SO exotic. :-)

I must say that stuffed peppers are one of my favourite foods.