Question: When is tabbouleh not tabbouleh? Answer: When it is a Turkish dish made with slightly different ingredients and called kısır.

Kısır is made from the fine bulgur wheat (cracked wheat).

When we’ve written about other Turkish meze recipes, we’ve no doubt said a particular dish is a favourite – Antalya Usulü Piyaz, or spicy Antep Ezmesi, for instance.

Well, we’ll just have to have more than one favourite because both of us love kısır.

We both have recipes that we take charge of in our house (Barry always makes Izmir Köfte and kızartma, for instance).

Our kitchen really isn’t big enough for the two of us so it’s a system that works well – and kısır is the one I always love to make.

I always make a ridiculous amount because, when we embark on making a feast of meze dishes, it’s usually in the hope of filling an army of friends we’ve cajoled along for a barbecue.

And the thing is with kısır, even if there are leftovers, it lasts in the fridge for a few days so we always get through it and we’re still sorry when it’s gone.

We first came across kısır in Turkish recipe books, but whenever I made it, I wasn’t really keen on the outcome. We both love bulgur wheat but the kısır was never quite to our taste.

Of course, over the years, we’ve asked around, seen more recipes and – as with lots of other Turkish recipes – we’ve discovered it’s made differently in different regions of Turkey.

The version I had been making in the early days was a kısır from East Turkey where a rather large dose of salça (tomato paste) is a part of the mixture.

It wasn’t a particularly good ratio for our taste buds.

Turkish people (and us) also eat it as a snack on a bed of leafy lettuce.

And we’ll admit to always eating a sneaky spoonful whenever we go in the fridge.

And so this is the version I make now. It’s a more West Turkey version and we love the flavours in it.

One of those flavours is nar ekşisi (a sour pomegranate sauce) but don’t be put off if you haven’t got access to that; a good dose of tangy fresh lemon juice is fine.

If you’re in Turkey, you can get nar ekşisi from the supermarket, local shops or the markets.

And if you’re lucky enough to know someone who makes it; wonderful! There’s nothing like homemade foodie goodies!

Tomato paste is slightly richer and sweeter but has a more dense texture, whereas biber salçası is lighter and more loose in texture.

And as for the fresh tomatoes, we love to use whatever’s in season. In winter, we use sweet cherry tomatoes cut in half.

The tomatoes you can see in our main kısır photo are chocolate tomatoes found on the Fethiye Friday market in springtime. 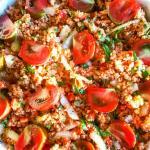 It's a +30C day here in western Canada and this made the perfect supper! Thanks for sharing the recipe - delicious on a hot day....actually the weather today brings to mind the heat when we stayed in Gokcebel last September. We had a week of +35-37C. Can't wait to visit Turkey again!

Thanks a lot for your comment, Alanna, and yeah, the weather is similar here, too, so kısır will be just perfect. :) Hope you manage to get back to Turkey soon for more great Turkish food. :)

Does anybody know if fine bulgur wheat is available to buy in the UK. I am assuming this recipe works best with fine bulgur?

Hi, yes, this is a recipe for fine bulgur wheat and you can buy it in UK supermarkets; it's often on the health food stands. :)

Sorry, April. Only just seen this comment, for some reason. Thank you very much, though. :)

@ Marie: Thanks for the lovely comment! :) Nice to know we pop up in Google in the right places, too. Thanks for reading.

Hi Julia, I discovered your by blog after eating some Biber Dolmasi n I googled it and your blog popped up. I love Turkish cuisine and have already made Kisir n loved it.

Keep up the good work, it's an enjoyable blog.:D