We do our best. We do our best to keep some sort of routine to our blogging, despite random appearances. However, routine has once again vanished in a puff of smoke from our lives – that’s summer in Fethiye for you – and where the blog is concerned, we’re now trying to drag our brains back to a more now-where-were-we type state. Where we were was Eskişehir. Where we are is weekend, and that means Turkish Food Focus. So let’s press on with an Eskişehir eatery and watering hole.

So far, we’ve shared our experience of Odun Pazarı, Eskişehir’s old town and told you how much we enjoyed our köfte and piyaz brunch, there. We’ve eaten çiğ börek and we’ve also taken you on a walk along the River Porsuk, followed by a little photographic stroll around Kent Park. But what’s been missing from our Eskişehir posts? The haven. In Antalya, we found Filike Bar; Izmir provided us with 6A Bar and Istanbul has Baraka. 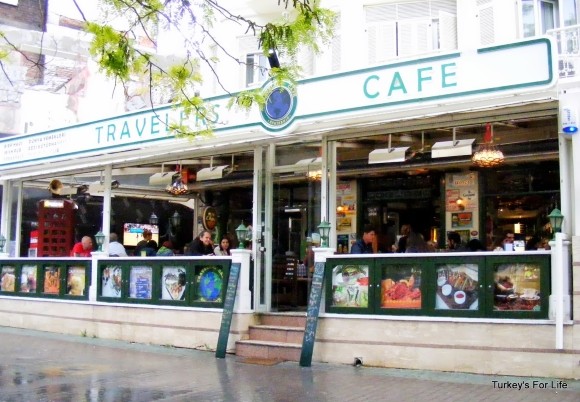 But strangely, we didn’t really find a single haven in Eskişehir. That’s no bad thing, nor is it a criticism. We were wanderers in this city and, as Eskişehir is a student city, there is no shortage of bars to choose from – and we kind of fell between two. Traveler’s Cafe was close to our hotel, it’s right on the banks of the River Porsuk, they had shelter from the early evening springtime showers and outdoor heaters to keep you warm…and they sell a massive beer. 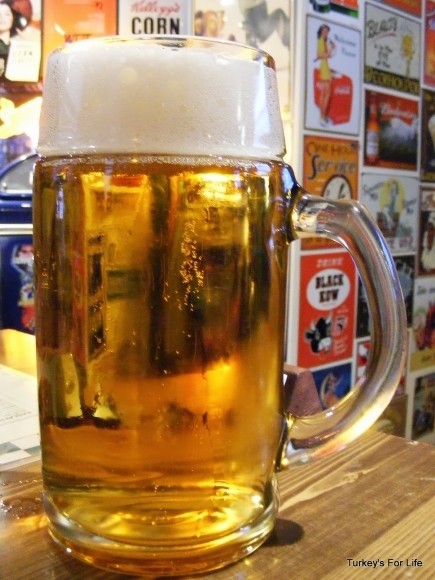 When you’ve spent a whole day exploring a city on foot, there’s no happier sight than an oversized glass of amber fizziness; cold amber fizziness. Yes, we usually go for the bottled beers – but Traveler’s Cafe has to attract student budgets just like all the other bars do. The bigger the beer you order, the more value you get. Massive beer it is, then, please. 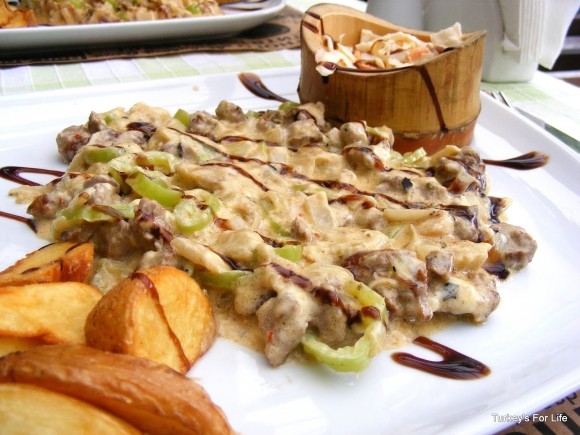 And the food is good, too, with lots of international dishes on the menu. Wonder if that’s why it’s called Traveler’s Cafe? This is one of the dishes from the Turkish menu and it’s name has completely escaped both of us but tender chunks of steak served in a rich, creamy sauce and drizzled with nar ekşisi (sour pomegranate sauce) is never going to offend our taste buds.

Traveler’s Cafe was never empty while we were there – we didn’t see many empty bars, actually. As we’ve said, Eskişehir is a student city. The city is home to the huge Anadolu Üniversitesi which, according to this Wikipedia article, is the second largest university in the world by enrollment and has almost 23,000 undergraduate resident students. It shows! 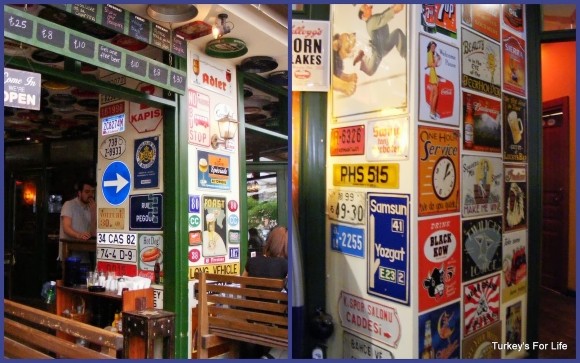 Eskişehir is a city packed full of Turkey’s bright young things and, while it occasionally made us aware that we are 30-somethings (and late ones at that), bars like Traveler’s Cafe are perfect places to sit and watch this young world in action…while benefiting from their oversized beers.

That is HUGE beer! Good for students I guess :)

@ Jack Scott: Unfortunately, it was a Tuborg, but it was still good after a long day's wandering. :)

Now that glass of cold Efes does look inviting. Cheers!

. . the reasons keep on growing along with the stars!!