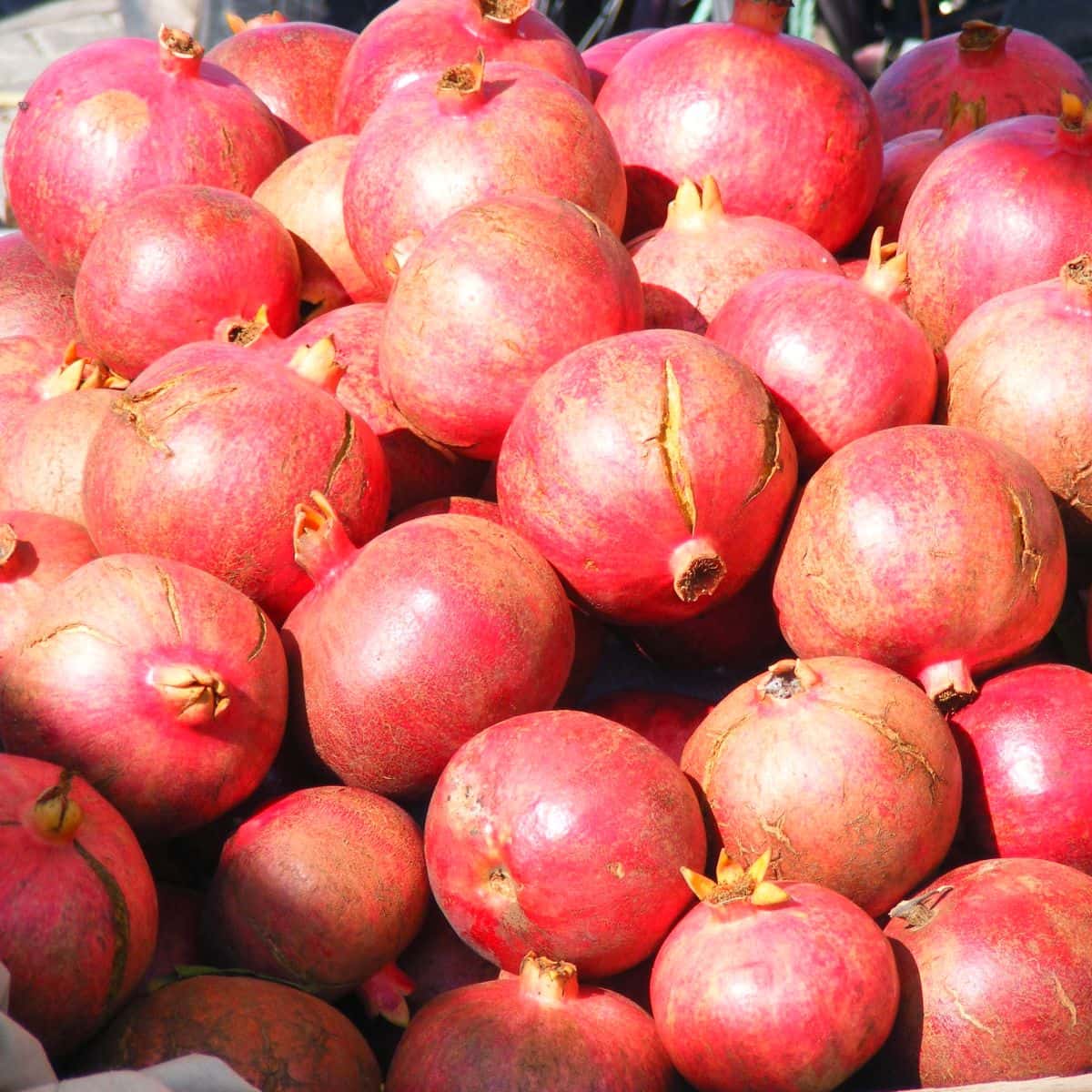 In the months of May and June around the Fethiye area and beyond to places like Dalyan and Köyceğiz, a true wonder of nature begins to unfold…

Pomegranate Trees – The Magic Of Nature

Whilst holidaymakers and travellers are busy enjoying the sights and sounds of all that this corner of Turkey has to offer, local gardens and groves are coming to life with fiery orange blooms.

May and June are the months where the Muğla Province’s pomegranate trees awaken from their cyclical slumber and once more begin to tease us with what is to come.

Because when it comes to pomegranate trees, we have a waiting game on our hands. But it’s a wait of beauty.

How magical to watch the trees burst into fiery springtime bloom. And then, as autumn approaches, be witness to those blooms reduce before morphing into huge jewel-filled fruits.

By mid-to-late October, the branches of the pomegranate trees are brimming with fruit and it’s time to harvest them. And this is the time when we get to indulge in one of our favourite fruits.

The stalls of the local markets are abundant with the fruit. City street vendors push their carts, teetering under the weight of the pomegranates. And snack kiosks pile them high, ready for thirsty customers.

At this time of year, you can stand atop the ruins of Kaunos in Dalyan and look down over the orchards and olive and citrus groves stretching away into the distance.

On your return to the town, you might catch some of the harvest and the roadsides will be filled with stalls offering freshly squeezed pomegranate juice (nar suyu) and homemade pomegranate molasses (nar ekşisi) for sale

The pomegranate is part of the berry family and has been cultivated since ancient times in the Mediterranean. Even then, people recognised its benefits and used the fruit to fight disease.

So, the good news is, as we revel in the joy of pomegranate season, we’re actually doing good for ourselves, too. It’s no accident that the pomegranate earned the title of ‘super fruit.’

Whilst the skin isn’t eaten, the seeds and arils (the crunchy, juicy red casing around the seed) inside are packed with goodness. Just some of the pomegranate benefits are:

You can find more detailed information about pomegranate benefits, here. But the main message is, when you eat a pomegranate, you are eating one of the healthiest foods out there. So what are you waiting for?

How To Cut A Pomegranate

What are you waiting for? Well, if you’re from the UK, you could well have the same experience as us when it comes to pomegranates.

All those winter days as a kid spent with a half pomegranate in one hand and a pin in the other, painstakingly pulling out one little ruby jewel at a time. Pomegranate juice spraying hands, clothes, surrounding walls.

When we moved to Turkey, all of that changed. We were in the village of Kayaköy one sunny autumn day enjoying a village breakfast with Turkish friends. One of them produced a couple of pomegranates and within a matter of minutes, the skin had been discarded and the ruby jewels emptied onto plates for the table.

A pomegranate in its prime is not perfectly rounded. It should have a slightly lumpy appearance and be slightly hexagonal. And now, here’s how to cut a pomegranate to release all of those juicy seeds:

Are You Sweet Or Sour?

If learning how to cut a pomegranate was a revelation for us when we moved to Turkey, so was the fact that there are two types of this fruit.

We had always assumed that the paler coloured pomegranates we see on Fethiye market were just not quite ripe. Rather than the more common ruby red seeds, the seeds are pale pink.

How Are Pomegranates Used In Turkey?

First of all, pomegranates are hugely symbolic in Turkey and are believed to bring luck and prosperity. We’ve spent many a New Year’s Eve in our local, Deep Blue Bar, where a friend has brought with them a pomegranate. At the stroke of midnight, the the fruit is produced and smashed onto the floor at the doorway.

So, as well as playing an integral role in Turkish cuisine, the pomegranate is also a lucky charm. But let’s get back to the food.

Simply enjoying pomegranates as they are is a hugely pleasurable foodie pastime, especially at the beginning of pomegranate season when you have been waiting for their autumn arrival. But what other pomegranate recipes are there in Turkey?

And surely, this is the joy of seasonal eating. A glut of produce that mustn’t go to waste. Just as the end-of-summer tomatoes and peppers are used to make pastes and sauces like salça and kahvaltılık sos (a perfect homemade ketchup) so the pomegranate is used to make nar ekşisi.

We would be very surprised if you went into a Turkish household and there wasn’t at least one bottle of nar ekşisi – pomegranate molasses – in the kitchen store cupboard. Our house is certainly never without it.

Wonderfully tangy, the pomegranate arils are simmered right down in a huge pot until they become a sour syrup.

This is then bottled up and stored for use in the kitchen or sold. The Fethiye Friday market is a great place to source homemade pomegranate molasses but you can look out for it on roadside stalls and small, independent grocers’ stores.

But don’t be expecting pretty, decorative bottles. We’re talking plastic water bottles from any brand of famous fizzy drink. And why not? More economical and reuse before you recycle.

So, what are some of the uses for pomegranate molasses or nar ekşisi? It’s distinctive flavour makes it useful as a dressing and also as a cooking ingredient in various Turkish recipes.

Bulgur wheat and nar ekşisi are a perfect match and two well known dishes that best demonstrate this are çiğ köfte and the Turkish bulgur wheat salad, kısır.

If you’re in a Turkish seafood restaurant then the pomegranate molasses are never very far away. Order simply fried or grilled fish – especially a sea bass or a bream – and nar ekşisi or a dressing with nar ekşisi as the main ingredient – will be delivered to your table.

Drizzle this over your fish and accompanying rocket leaves. Divine! If you’re in the Çalış area and you just want a quick and tasty balık ekmek fix, the fishermen’s cooperative give their fish sandwich offering a boost with the addition of pomegranate molasses and sumac mixed into the salad.

And now we head to the cuisine of southeast Turkey where pomegranate molasses feature in various dishes.

Nar ekşisi is paired with walnuts and both are an essential ingredient in the indulgent dip, muhammara and the tangy salad, Gavurdağı Salatası.

Also from the southeast of Turkey, in the Gaziantep province, pomegranate molasses are used in cooking to give a sweet and sour flavour to Yeni Dünya Kebab.

For us, personally, we use pomegranate molasses as a dressing for most of our salads. In cooking, I also drizzle it into the frying pan with local honey to make a sticky coating for sweet and sour chicken or beef.

If you want to buy pomegranate molasses (nar ekşisi in Turkish) and you’re not in Turkey, there are various products out there of all different prices and quality. ‘Ekşi’ means ‘sour’ and that’s how the sauce should taste. Lots of manufactured products have sugar added to make it sweet as well as other additives.

If possible, check the ingredients before you buy and go for the product that has the least amount of sugar and the highest pomegranate content.

And if you are in Turkey, it’s easy to support local and buy from the villagers when they have it available.