Eskişehir really is a city that puts a smile on your face. Recreation seems to be the main mission here and having a bit of fun is taken seriously. There are sculptures all over Eskişehir city centre and the River Porsuk has been transformed into an attraction where you can sit in riverside bars such as Traveler’s Cafe and watch the gondolas bobbing by. You need to swap to the other side occasionally, but you can walk along the Porsuk all the way to Kent Park.

And in a city that’s industrial, the provision of recreational spaces takes a bit of imagination…and someone in Eskişehir makes full use of theirs! Of course, it makes complete sense to restore the Ottoman houses of Odunpazarı to their former glory – but creating a ‘beach’ and a ‘sea’ in the middle of Kent Park; well, it just makes you smile! 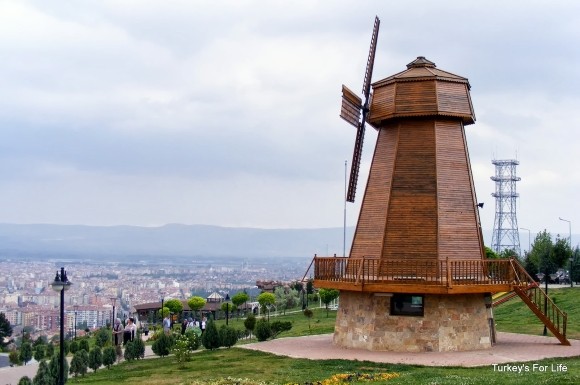 Then there’s Şelale Park. This windmill is responsible for our trek up to Şelale Park. There we were, wandering around the Odunpazarı and we could see a tiny windmill at the top of a hill in the distance. “Must be decent views from up there,” we thought, so we set off, following the road that climbs away from the Ottoman houses…and it does climb! “This had better be worth the effort!”

We followed the Şelale Park signs and eventually reached the grand entrance gates – they’re on an impossibly steep hillside, as is the park that lies beyond them. Not for the first time since we arrived in Eskişehir, we are the novelty foreigners (we had already been a novelty in Köfteci Ahmet) and a car slows right down, windows open, voices shouting, “Hello. Welcome to Eskişehir, where are you from?” Their opinion of foreigners may have taken a bit of a nosedive at this point because I can barely breathe by now, nevermind speak. I manage a whispery, “England,” before pressing on through the gates and up the pathway. 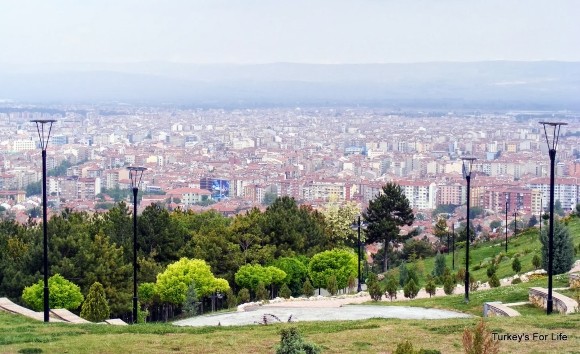 Looking out over Eskişehir from Şelale Park

And yes, there are indeed decent views of the city from up here. We soon realised the windmill is there for decorative purposes. People climb up the steps and have their photo taken – me and Barry skip out on that particular activity because, as with Kent Park, there’s an eclectic mix of other works to admire. 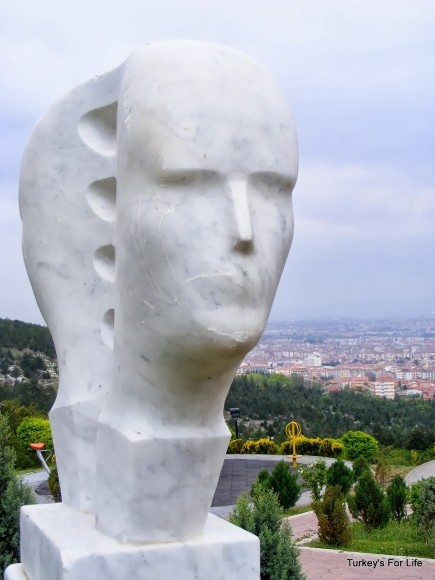 This is Turkey – people like to have their photo taken. Fact! So we waited patiently while a young couple took it in turns climbing around this chap to get photos of themselves in various contortions. We had to be quick to get a people-free photo because others were lingering behind us. No doubt their photos went straight to Facebook for everyone to like and share and maybe we should do the same…but it’s just not us. 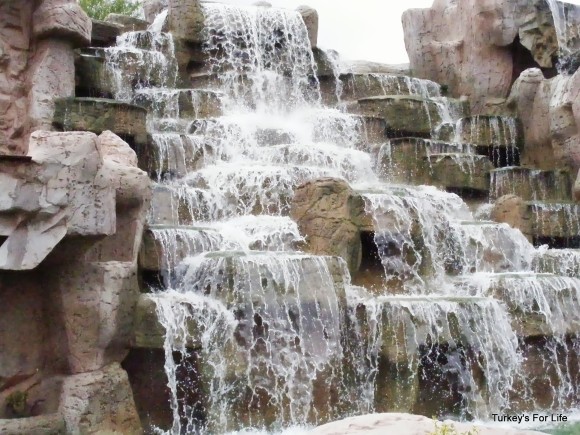 Şelale means waterfall…and this is the waterfall we had climbed all the way up the road to see. This was our reward. We both had hands on hips and smiled. Huge fake, plastic rocks with water teeming into a rectangular pool at the base. What the…? But it’s Eskişehir; don’t question…otherwise you’ll be wondering why on earth someone built a wooden, decorative windmill next to a massive marble face. And just by that is a little statue of a chap on a donkey, too. Who’s he? 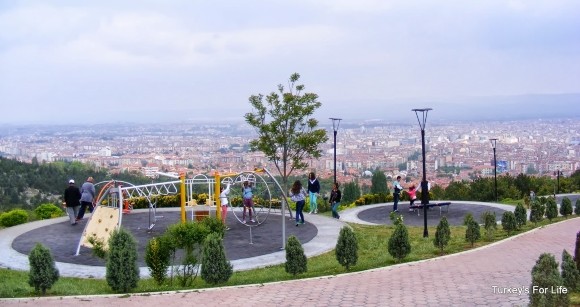 Views of Eskişehir from the park

There’s a play park with a view at Şelale Park and you’ll be pleased to know there’s also a cafe – with panoramic views of course – serving soft drinks and Eskişehir’s famous çiğbörek amongst other snacks.

And just imagine the views over the city at night time…

Hi Julia. Reading everyone's comment bout Eskişehir made me smile. (I thought same thing :P ) And thank you for having this post about the city. Very useful one for people wanna visit here.I'm a foreigner living here (Eskisehir) btw. Are you living in same city too? Or fethiye.

@ Joy: It really works in Eskişehir though. Keeps your interest and the locals seem really proud of it. :)

@ Atilla: Ahhh, thanks for that. There was a plaque in the park saying what they were but I forgot to take a photo of it. Eskişehir is a great city! :)

If you mean these chaps http://www.odunpazari.bel.tr/ckfinder/userfiles/images/haber-donki%C5%9Fot-b3.jpg

Those are Don Quixote and Sancho Panza and you might guess why there is a fake wind mill.

Interesting! And definitely quirky! ;-) I do have to wonder sometimes how and why people do the things they do. Government planning, ha!

@ Alan: Well, quirky Eskişehir, anyway. The more posts we write on it the odder it seems and the fond we become of it. :)