All good cities need a smattering of fun or eye-catching sculptures to keep the passers-by entertained as far as we’re concerned, and Turkey does this form of street art very well. There’s not much we’d suggest for improvements to Fethiye…but a few random sculptures dotted around town would just put the icing on the cake.

If anything, the Antalya street art was the highlight of our stay while we were there a couple of years back – and Izmir didn’t disappoint either. Of course, Izmir Saat Kulesi is an attraction in itself but there are also other, more modern offerings such as Dilek Ağacı (Wish Tree), which made a perfect silhouette for an Aegean sunset photo.

Which brings us to Eskişehir. Well, if you’ve been following our posts on this arty city, you’ll know by now that it’s a sculpture hunter’s dream. In Kent Park, it’s an eclectic mix that greets the visitor and those who make the climb up to Şelale Park will see a more quirky collection.

The following photos are just a few of our favourites that appeared before us along the streets of the city centre. 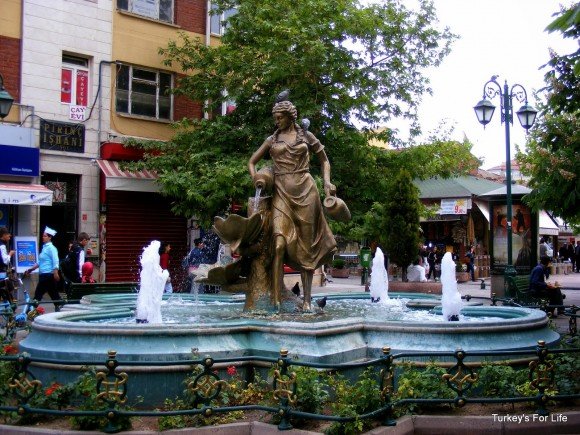 These more traditional types of statue are all over the city centre and make what would otherwise be an ordinary looking street more pleasant to be wandering around. This lady was our favourite out of this collection. 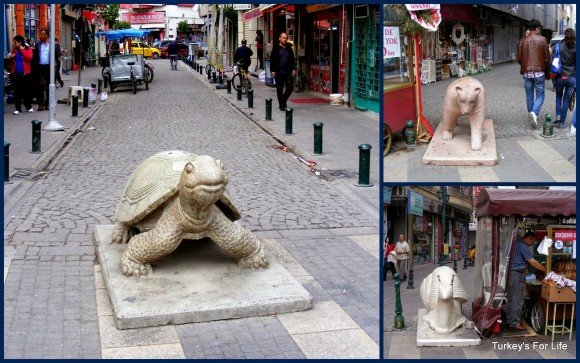 But we love fun, random pieces of art that just seem to pop up from nowhere and have no particular reason to be there. A tortoise, snail and bear, for example, sat in a row, marking the entrance to three side streets. No idea of their significance – does there even need to be one? We’ve said it before and we’ll say it again – Eskişehir makes you smile. 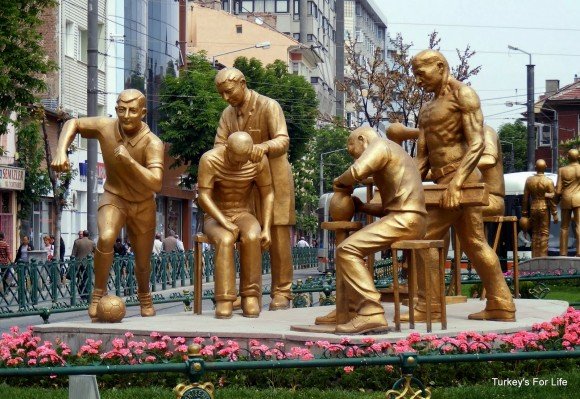 In downtown Eskişehir where numerous roads meet and the tramlines criss-cross each other, there’s a series of gold-coloured statues right in the centre – you can’t miss them; they’re massive and, errrm, gold. This one appears to show different professions and skills. We don’t know why… 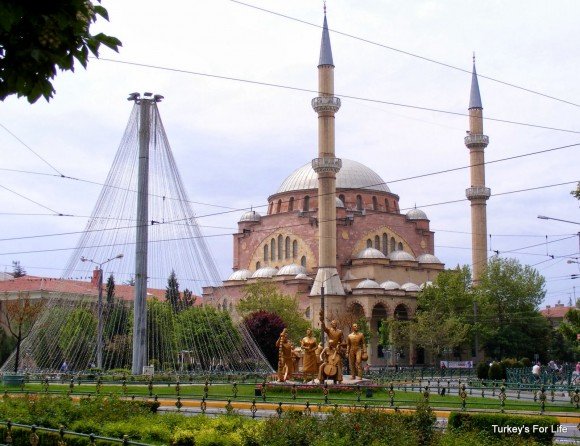 And how can you not like a group of musical sculptures with Reşadiye Camii (Eskişehir’s largest mosque) as a backdrop? We were taken by it, anyway. 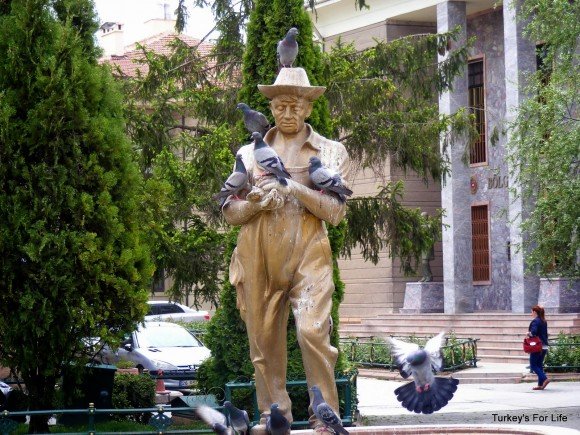 This chap isn’t too far away from the statues above. He gets a bit of a raw deal from the local pigeons – as did Barry’s shoulder while he waited for me to take some photos – because people sit on the surrounding benches and feed them. If you’re not a fan of flying objects, you might want to give this stretch of pavement a wide berth. The pigeons of Eskişehir are made of strong stuff! 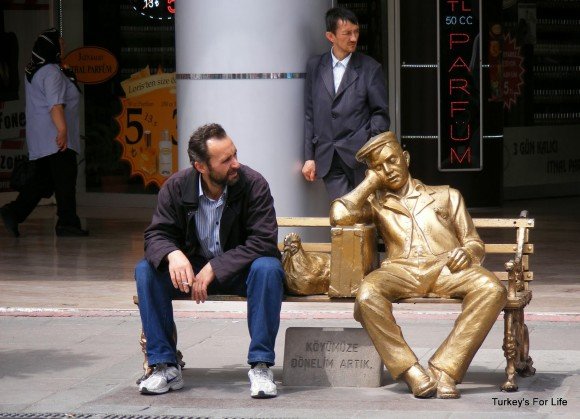 Some guys are sleepier than others…

But these are the sculptures that Turkey does so well. How cool is this chap? And it’s practical, too – for the lone person in town who needs a minute, that is. This is probably the favourite for us… 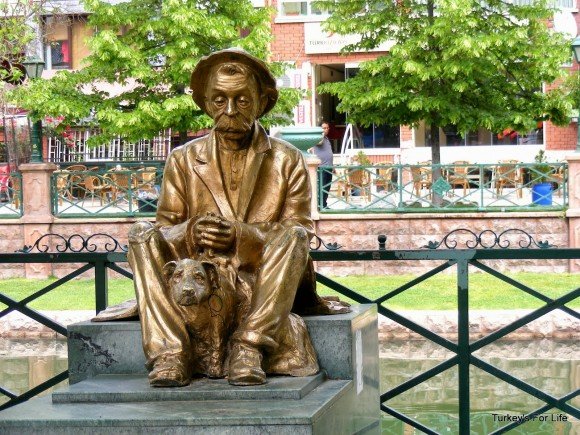 …but we also love this old guy, too, sitting by the Porsuk River. He doesn’t jump out at you – I think we walked by him a few times as we made our way to Traveler’s Cafe. But when you do see him, it’s strange to enjoy a piece of art when he’s such a sad sight. 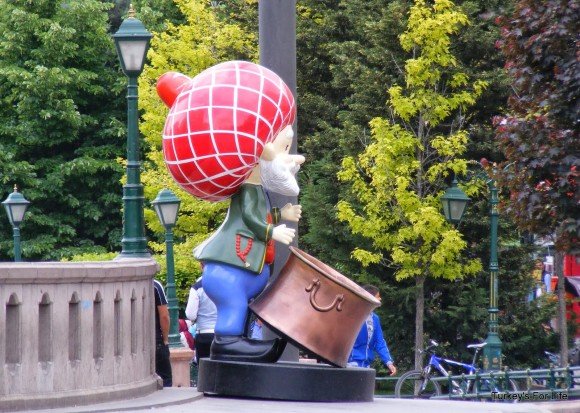 And we couldn’t miss out one of Turkey’s most famous characters. Nasreddin Hoca stands by one of the bridges that cross the Porsuk River in the centre of Eskişehir. Nasreddin Hoca dates back to the 13th Century and he was famous for his thousands of funny stories which are still told today in modern Turkey. Sivrihisar in the Eskişehir province is widely believed to be his place of birth.

It’s time for us to leave Eskişehir now. As we were on a longer trip around Turkey, our time in this student city wasn’t nearly long enough and there’s a lot we didn’t manage to see and do. We’re not done with Eskişehir yet! However, we needed to press on towards the east of Turkey to visit our friend. Next stop, Ankara.

Looking forward to reading the Ankara ones as I only moved here three weeks ago! Had hoped to be in Fethiye for Bayram but no seats available on buses. So my next trip to Fethiye will have to wait until next year I think.

@ Miss Footloose: I bet you've seen all sorts of sights in your travels! :) These Eskişehir statues seem quite tame in comparison. :)

@ Turkish Dreams: Eskişehir is just fab. We're swapping you because we're in Ankara for the next lot of travel blog posts. :)

Looking forward to visiting Eskişehir over the next few weeks. Great photos

Julia, what fun! I love this kind of street art. In Amsterdam's red light district there's a statue of a prostitute right in front of an old church. I love the contrast ;)

In Armenia there were a lot of statues from Soviet times, many of them along the main roads. They were very "Soviet" and not usually pretty, but sometimes amusing.

@ Ozlem's Turkish Table: There were loads more around Eskişehir, too. These were just a selection. Loved them. :)