We love food; that’s a given. We’ll try anything put before us…but for some reason, acquiring a sweet tooth is something that is proving difficult and, when you live in a country like Turkey, it gets a bit frustrating.

We don’t want to sit and get fat, eating Turkish desserts all day long – but it would be nice, just occasionally, to finish a meal and then get a bit excited about what might be on the dessert menu. We do make sütlaç or enjoy that in the restaurants of Fethiye but that’s as far as it goes.

We were talking about this recently with a Turkish friend. Turks are proud of their cuisine and so this person seemed a bit concerned about our lack of enthusiasm for all things sweet.

Barry does get the occasional craving in winter for tatlı and will happily walk round the streets chomping his way through it, and it’s not like we don’t make the effort in other areas.

Last September, I made a Turkish dessert named Revani from the cookbook, The Sultan’s Kitchen and we were also talked into sharing künefe after a meal at Mozaik Bahçe. It’s because we don’t like to be defeated! 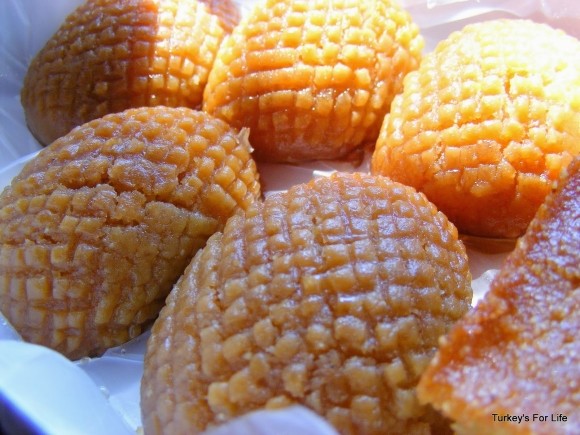 So one day while we were sat at home, the friend mentioned above knocked on the door unexpectedly with a box in his hands. “Okay, you can try these,” he said. I dutifully put plates and forks out and we opened the box to see what treats were waiting inside.

The sweet in the photo above is kalburabastı. We’ve lived in Fethiye for nearly ten years but this was a new one on us. Our knowledge of sweet treats is pitiful, really – but then if you never even feel the urge to look at them in your local pastane, it would be, wouldn’t it?

Inside the sponge casing is walnut. That was a good start for us – a difference in texture and a bit of savoury.

And, most importantly, this particular kalburabastı wasn’t too syrupy. It didn’t make the teeth start buzzing as soon as you put it to your mouth and the flavours were allowed to come through. There was a bit of grumbling from our friend – apparently there’s supposed to be walnut sprinkled over the top, too, so the pastane (cake shop) were scrimping.

Not to worry though; it was edible is the main thing.

In Turkish, kalbur means sieve and bas means to press. So the little markings on these kalburabastı are where the dough has been pressed against a sieve to form the pattern, hence the name.

There were five of these little sweety treats in the box; one for our friend and two each for me and Barry. The good news is, we finished them and they were actually quite pleasant. I might even try to make some one day…

Have you ever had kalburabastı? What was your verdict?

@ Reluctant Runner: Yes, we know exactly the dessert you mean and we know what it's called, it's just the spelling! :) THINK it's ici bici...

@ Claudia Turgut: No, this one was a new one on us, too. They're usually variations around a theme but it doesn't stop us keep trying. :)

@ Ozlem's Turkish Table: we don't like to be defeated by food - including desserts. :)

@ BacktoBodrum: Yes, the walnut made all the difference in this dessert - and the fact that it wasn't too sweet. :)

I agree with BtoB above: I find them all variations on a very sweet theme! Not that I don't like them but they are just tooo fattening!!! Never heard of this one, though.

I'm not a dessert person either, but my partner ordered a delicious dessert when we visited Mozaik Bahçe this summer. I forget what it was called, but it was some kind of milk pudding with a rose water jelly - lovely and light and not too sweet!

I'd like to try a sample of kalburabasti - next time I'm in Turkey perhaps...

Like Ozlem says - they are all too sweet and despite the different names, I find most taste the same. The walnut gives a bit of excitement though.