Are you familiar with this revani recipe? A light, sponge semolina cake drenched in a zesty syrup. If you have a soft spot for tasty sweet treats, this is going to be a dessert for you!

A few years ago, we were sent a copy of the famous Turkish cookbook, The Sultan’s Kitchen, for review. The publishers said we could use three of the recipes for the blog, so we decided to make a three-course meal.

The dessert in the book is actually called Süzme Yoğurt Tatlısı (Yoghurt Dessert or Yoghurt Cake). However, a few years further down the line, a few years with a bit more knowledge under our belts, and we now know that this is actually a revani recipe with yoghurt. 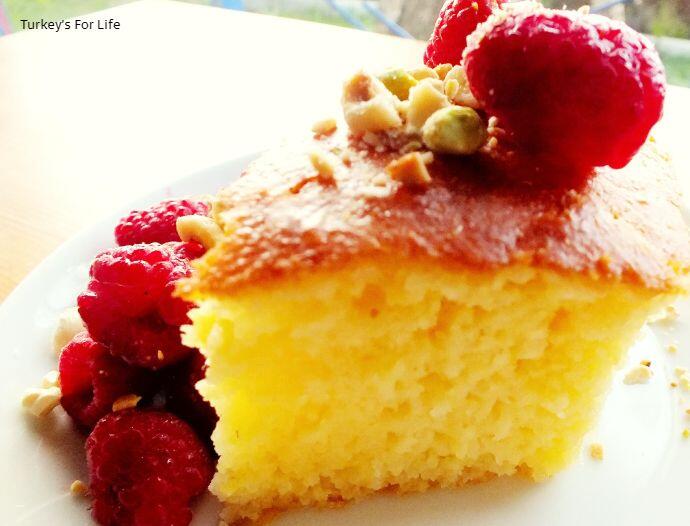 If you’re British and of our generation – we who were at primary school throughout the late 1970s and early 1980s – then the word ‘semolina’ will either evoke horror memories of school dinners or fond memories. Very much a divided camp.

I’m in the ‘fond memory’ camp. But, whichever side you fall on, don’t let that influence you with this semolina cake recipe. Semolina is just a type of flour – a coarser grain with a hint of yellow to the colour.

We don’t have a particularly sweet tooth but revani cake is one dessert we do enjoy. You’ll see why as we go through the method.

Revani is enjoyed very much – not just in Turkey, but also in Greece, Albania and the Middle East.

In Greece, many recipes use oranges for the citrus flavours – we’ll be using lemons – and we’ve even seen one recipe that adds a splash of alcohol (brandy) into the mix, too. Knowing the texture of revani cake and the way in which it absorbs the syrup we pour over it, we can see why that idea came about!

But let’s get back to Turkey and our Turkish revani recipe.

Quite often, we will tweak recipes and add or omit ingredients to suit our own taste. When it comes to baking, however, and we’re weighing and whisking, it’s important to stick to the measurements.

And besides, we’ve done this revani recipe a few times now. And, as far as the ingredients are concerned, there’s nothing we would change.

This recipe is taken from the Turkish cookbook, The Sultan’s Kitchen. The recipe is from page 144 (of our edition) and is republished with the permission of publishers, Tuttle Publishing. All photos are our own and the recipe is written in our own words.

Preparing The Syrup For Your Revani

If you start with your syrup, it can be cooling whilst you get on with the rest of your revani recipe.

The syrup is a very simple mix of sugar and water. We’re introducing some zesty tang by adding the juice of fresh lemon. We love a ‘lemony’ revani so four tablespoons of lemon juice is going into our syrup – the original recipe says two tablespoons.

If you are sticking to the quantities we use in this revani recipe, you’ll need a large mixing bowl. Feel free to halve the ingredients if you don’t want to to make such a big revani cake. 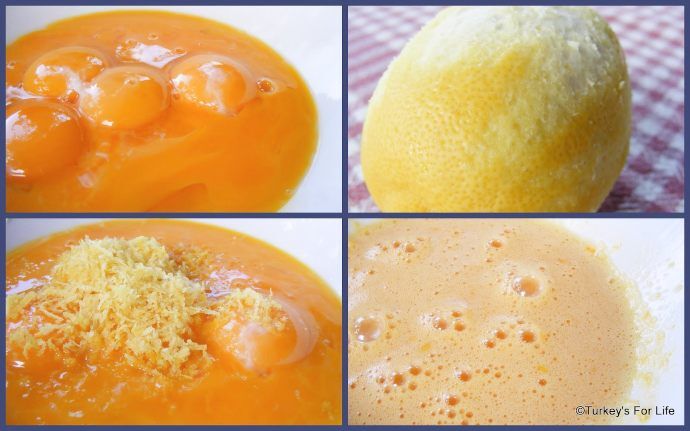 In with the eggs, sugar and lemon zest

And, first of all, you’re going to take eight eggs and separate them, letting the whites fall into a separate bowl. Drop your yolks into your mixing bowl.

Separating eggs is really easy. Crack the eggs in half one at a time and keep dropping the yolk between each half shell. The egg white will fall away. And, eventually, you will be left with a little ball of yolk.

Then we’re going to add lemon zest and sugar to our mixing bowl and beat everything together until we get a foam on top. The lemons in Turkey are quite large and we use the zest of a full lemon. If your lemons are small, use two. Unwaxed lemons are best for grating away the zest. 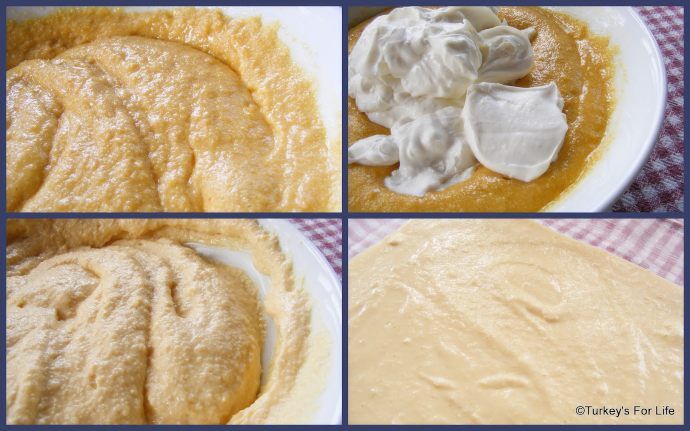 Now it’s time for your batter to become a semolina cake. We’re going to add semolina flour, plain flour and baking powder. These will then be folded into the mixture.

Folding will keep the air in the revani mixture. Memories of baking with my nana when I was a kid, stirring in a slow figure of 8. Keep swirling, patiently. Eventually, all the flour will be mixed in (see top left photo in the collage above).

Once the flour is mixed in, it’s time to stir in our yoghurt. And then, it’s time for the egg whites.

Our egg whites need to be whisked until they are white and fluffy and forming soft peaks. If you add a pinch of salt, this process will be quicker. If you are whisking by hand, this will take around 5 minutes. An electric whisk should only take a minute or so.

Again, fold your egg whites into the mixture. Now you can lightly grease your cake tin or oven dish and pour your revani cake mix into it.

For the quantities in this revani recipe, we use a circular oven dish that is 27 cm in diameter and 5 cms deep. 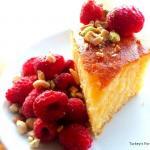 For The Revani Cake Mix

For The Revani Syrup

For The Revani Cake

Everybody’s ovens are different. The revani recipe we followed says to bake your cake mixture in the centre of the oven for 45 minutes or until it’s golden brown.

Our oven is small and when we make revani cake, it only takes arouınd 30 minutes to rise and go golden. We then move the cake to the bottom shelf with the oven reduced to 160 degrees and bake for a further 10 minutes.

When Your Revani Cake Is Cooked

Isn’t there something really comforting about the sight and aromas of freshly baked sponge cake straight from the oven?

Now it’s time to cut your revani cake. Whilst it is still in your oven dish, cut it into medium sized squares or diamond shapes.

Check your syrup has cooled and then pour it all over the top of the cake. You might have to do this at short intervals and it might seem like you have far too much syrup. Be patient and you will soon see that the syrup soaks into the sponge mixture.

Keep pouring the syrup over the cake until you have used it all.

And now for the best bit. Serving and eating your revani cake! You should find that the pieces remove easily from your dish without sticking, as you can see in the photo below. 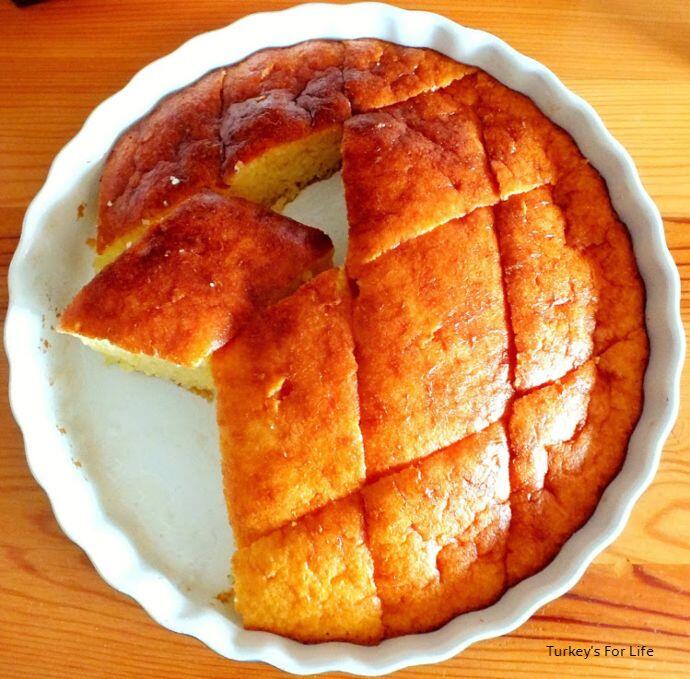 Slice your revani semolina cake into squares or diamond shapes

We’re being slightly traditional with the topping for our revani recipe. We use roughly chopped pistachio nuts. Traditionally, the nuts are smashed to an almost powder texture. But we like the crunch of the slightly larger pieces. 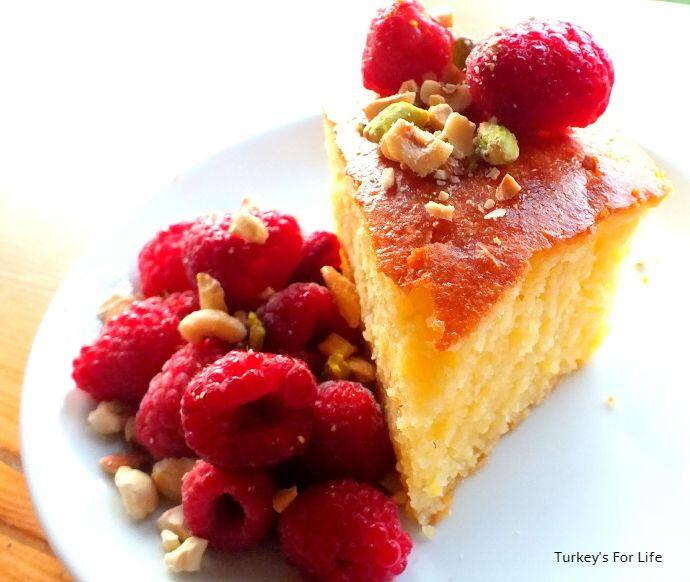 And, not so traditionally, we also love to serve our revani with raspberries. Not only do they taste great but they’re also a fabulous flash of colour.

Raspberries have a bit of sharpness to their flavour. Because neither of us have a particularly sweet tooth, the lemon zest in the revani recipe, the lemon juice in the syrup and then the raspberries on the side all work together to balance out the sweetness of the cake.

As far as we’re concerned, this revani is zesty, sweet temptation on a plate. The recipe makes a lot of cake so a good few of the pieces are taken to Barry’s mum. She loves it!