Many Turks will be amazed that we managed to live in Turkey for over ten years before we had our first ever taste of what is perhaps Turkey’s most well known soup; Tarhana Çorbası.

When we did finally make tarhana soup, I put this on my Facebook profile and on Twitter.

“Noooo waaay,” was one reply.

Here we were; two enthusiasts about all that is Turkish food – and we’d never slurped the famous and much-loved tarhana soup.

So we thought about some of the possible reasons…

Way back in 2010, we did a list of 6 Turkish soups you’re likely to find in the restaurants and lokantas around Fethiye.

Tarhana çorbası doesn’t make that list because you don’t find it in lokantas. That’s one reason.

What Is Tarhana Made Of?

And perhaps another reason is that this is a soup that’s made and eaten at home.

It’s what parents make and send to their kids who are away at university or working away from home.

Just so they can be sure their offspring are at least eating one wholesome sensible meal occasionally.

Because, before it’s rehydrated tarhana soup starts off looking like this…

Tarhana soup starts off as tarhana dough; a dried food. The preparation of tarhana dough is a process that takes days.

And most Turkish households will have the dough tucked away somewhere in a cupboard.

Tarhana that’s been made by a mum, auntie or grandma before being divided up to be shared amongst family and neighbours.

Then, on a cold winter’s day, comforting tarhana çorbası can be made.

So, how did this tarhana dough come into our possession?

It was a lovely gift, that’s how!

A friend of ours from Istanbul returned to Fethiye.

And, as lots of mums do, this friend’s mum had packed her off with family homemade tarhana in her luggage.

When we went to see her, she produced a bag for us.

“My mum said give this to Barry and Julia. She’s really sorry there’s not more.”

A gift with an apology?

No need! Big thank yous from us.

Because you can buy tarhana in packet form in the supermarkets these days, but that’s just not the same, is it?

The tarhana in our photo above has been made by the hands of our friend’s mum. And she’d thought to send some for us all the way from Istanbul.

What better gift than the gift of homemade food?

Especially a homemade food where the skill of producing it is passed down through the generations.

In Turkey, tarhana is made up of various ingredients that can include:

And then it’s dried, sometimes out in the sun.

And then, eventually, somehow, the final result is the crumbled dough you see in the photo above.

Yes, we think we’ll leave the making of tarhana dough to those who know what they’re doing!

How To Make Tarhana Soup

These days, in good Turkish fashion, our kitchen cupboard is never without tarhana dough.

We ate our friend’s mum’s version sometime ago but we restocked with some tarhana we bought at Kadıköy Market in Istanbul.

We buy the version containing salça (tomato paste) because we prefer the flavour and the final colour of the soup.

Before you make tarhana soup, the dough needs to be rehydrated.

This is the only bit you’ve got to remember in advance. Otherwise you’re gonna be a bit hungry while you’re waiting.

We put two heaped dessert spoonfuls into a cup of tepid water and leave it for a couple of hours, giving it a stir occasionally.

And you can always make your stock in the meantime, too.

Where possible, whenever we make tarhana çorbası, we like to make our own chicken or meat stock to go with it.

Well, if someone has gone to the trouble to make tarhana dough, it seems a shame to just throw in a stock cube, doesn’t it?

We make our stock for the soup by boiling the carcass of our takeaway kömürde piliç and just throwing in a bit of onion and herbs.

Nothing too taxing but a good, homemade stock makes a difference.

Once all that’s done, it’s just a case of heating it through and enjoying winter in a bowl!

To serve, we sprinkle with chilli flakes and a drizzle of chilli-infused olive oil.

And what does Turkey’s famous tarhana çorbası taste like?

Well, flavours vary depending on who has made your tarhana dough. But, for us, the first time we had it, we both recognised a flavour from our childhoods…

Most people of our age in Wigan have been brought up as kids on Heinz staff sales – cupboards filled with tins without labels.

Oxtail soup always seemed to feature more than the others.

So, here’s our recipe… 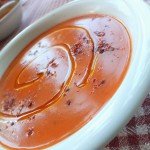 Tarhana soup is a tasty, comforting winter soup and is one of the most famous Turkish recipes. It's also eaten in places such as Cyprus (where it's a speciality), Greece & the Balkans. Recipes for tarhana dough vary.
Course Soup
Cuisine Turkish
Prep Time 2 hours
Cook Time 15 minutes
Total Time 2 hours 15 minutes
Servings 4
Calories 200kcal
Author Turkey’s For Life

And that’s how to make tarhana soup. Easy when you’ve got the dough!

View all of our Turkish recipes.

Can you translate a "dessert" spoon measurement for me in the US. Is this a teaspoon or a Tablespoon (=3 teaspoons). These would be filled and then flattened with a knife blade, otherwise they would be "heaping" with rounded tops. Thanks!

Hi Janet, there's a link to Wikipedia, here, that explains the measurement in the 'Culinary Measurement' section. https://en.wikipedia.org/wiki/Dessert_spoon#:~:text=As%20a%20unit%20of%20culinary,UK%20it%20is%2010%20ml. For tarhana soup, the measurements don't need to be too accurate. Add more rather than less and you'll get more soup. :) In the UK, a dessert spoon size is between a teaspoon and a tablespoon.

Here in Greece we have something similar but a little different called Trahana that they make into soup, a Turkish student has just sent me some Tarhana to try that her mum made and I found your recipe... but I will probably add a bit of feta!

Thanks for your comment. A Cypriot lady also told us about their version of tarhana, too. I can't remember if it was called trahana. We love to add meat rather than cheese. Hope you enjoyed it. :)

I too was brought up in Lower Ince Wigan and can vividly remember the Heinz soups as all my Aunts worked at ‘ Eyenziz’ I also learned about pickled walnuts at that time and we still eat them every Christmas . We have several walnut trees in our Turkish garden and have never got round to pickling any yet. Maybe another one for you to try?

Hi Andy. Thanks for your comment from a fellow 'Heinz kid.' :) We love Tarhana Soup and it tastes even more 'oxtaily' when you add mince meat. Fascinating about the pickled walnuts. Neither of us have ever seen them or heard of them. Will look them up though. We LOVE pickles! Thanks a lot. :)

Hi .I too was brought up in Wigan on heinz staff sale tin foods. I used to like the ones with no label and guess what easy inside. I'm now living in Mersin. Reading your soup recipe and the "oxtail soup" quote brought back many memories. Thank you Did you pour your oxtail soup over chips. . . Yum

Hi, Wow, thanks a lot for your comment. Small world isn't it and yeah, shaking the tins trying to guess what was inside - a part of growing up, wasn't it. :) We used to pour the vegetable soup over our chips. :D Wonder what tarhana soup poured over chips would be like... ;)

Crumbled feta on top is the icing on top! Love the saltiness!

Ahh, interesting, TonTon. We're not *huge* fans of the cheese with tarhana soup. But we do love minced beef with it. :)