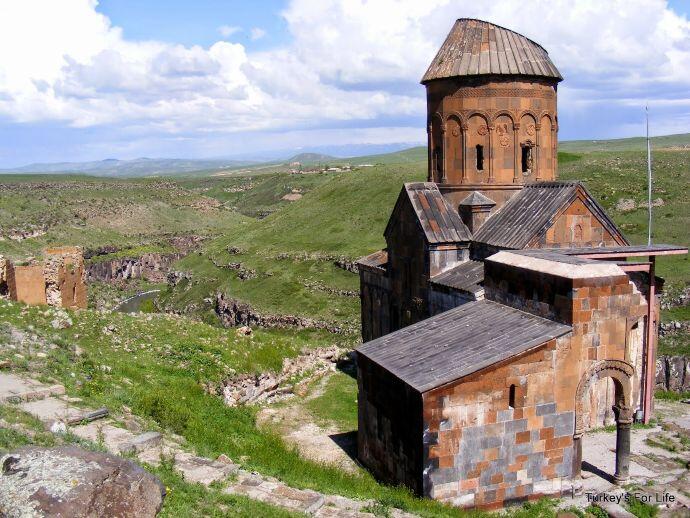 The Ani ruins lie in the Kars Province, southwest of the city of Kars in a village called Ocaklı.

As with most drives we did around this area, the route from Iğdır towards Kars and Ocaklı is virtually traffic free.

The roads stretch for miles until they disappear over the horizon.

And, as we told you in our driving tips for east Turkey, they’re full of potholes. When you turn off the main road to head towards Ocaklı, your giant slalom skills will improve immensely.

But, as there’s very rarely any oncoming traffic, this is more of a fun activity rather than an annoying hindrance. And you can keep a decent speed up.

A drive through the tiny village, parking the cars on a clearing (occupied only by a man watching over his three horses) and here we are.

The ancient walls of the Ani citadel just there, right in front of us. No approach road.

No real car park. No coaches. No queues of tourists…

Just us and a guy on the gate checking our Müzekart.

It’s the story of our East Turkey experience really – wild, lonely, vast, beautiful. Here we are in a ruined city which was once a major part of the Silk Route.

Indeed, Ani rivalled ancient Constantinople and Baghdad in size and importance at one time. And there’s only us here…

And just like Ishak Paşa Sarayı, this is another ambition realised for us. We’ve seen so many photos and posters of east Turkey’s historic Armenian architecture over the years.

We’ve said over those years we’d love to get there one day. But there was never a definite plan.

We knew these structures were somewhere near Kars – and that was where our knowledge ended.

What we didn’t expect was the fabulous, lonely setting. Before our visit, we didn’t know that this was once a thriving city, abandoned centuries before.

Once again, we’re tiny people in a huge expanse of grassy highlands. We’re not exploring a ‘site’ as such.

It’s a feeling similar to walking around the ruins of Kayaköy in winter.

Although it’s abandoned, it almost feels like you’re intruding. Amongst the wows at the scenery, the architecture, the frescoes; there’s also a feeling of melancholy.

“Look at this place,” says one of our party, sadly. “Not a soul here and most people probably don’t even know it’s here”.

He says this in the context of awareness about the area rather than creating a tourist attraction.

It does feel like a secret place as we clamber up and down hills following the ravine which marks part of the border between Armenia and Turkey.

This place, Fethiye Camii (Church of the Holy Mother of God – Ani Cathedral) was begun in the year 910.

Along with the rest of the ruins, it’s not in the best of states. With earthquakes, sackings, abandonment, harsh weather conditions and neglect, it’s testament to those builders that anything is left standing at all.

And there’s modern day graffiti telling us who loves who and the date they loved each other.

Both close up and from a distance, standing all alone, nestled in a dip between two hillocks, the cathedral commands your attention.

We spent some time at Ani ruins.

There’s quite a bit of ground to cover between each structure, but it’s no chore walking between them.

The scenery is spectacular; caves buried in the cliff faces lining the gorge, shepherds and their herds just tiny dots by the winding river below.

Exhilarating to be in so much open space – especially while exploring ruins that, in other places in Turkey, could be packed full of people doing the same as us.

Eventually, after around three hours or so, it’s time to move on. We need to press on to Kars to eat some food before heading back to Patnos.

We’re all quite sad to leave. Because, quite honestly, it’s been a privilege to be able to see all this.

How much we’ve seen on our East Turkey road trip…and what a grand finale Ani has been!

We wander back through the gate of the city walls and back into the village and daily life of Ocaklı.

It’s assumed food in Kars will be the end of our adventure.

However, what we don’t have any idea of, as we walk back to the cars, is our adventure is not over just yet.