This was one of those little outings where, when you go to visit a friend in a new place, they have things they really want you to see before you leave. A bit of a quick stop tour.

The east of Turkey really isn’t close to Fethiye – it’s only when you head that way that you really get a feel for the sheer size of Turkey – and the east of the country is not somewhere that you’re just going to nip backwards and forwards to, either. We needed to fit in as much as possible while we had the opportunity…

So, we’d got back from our longer East Turkey road trip the day before and despite being driver-tired, the opportunity to drive along the north shoreline of Van Gölü was too much to resist. Whatever tiredness was there was soon pushed to one side and the three of us hit the road, southwards towards the lake from Patnos.

A quick left onto the lake road and we were off to Adilcevaz. 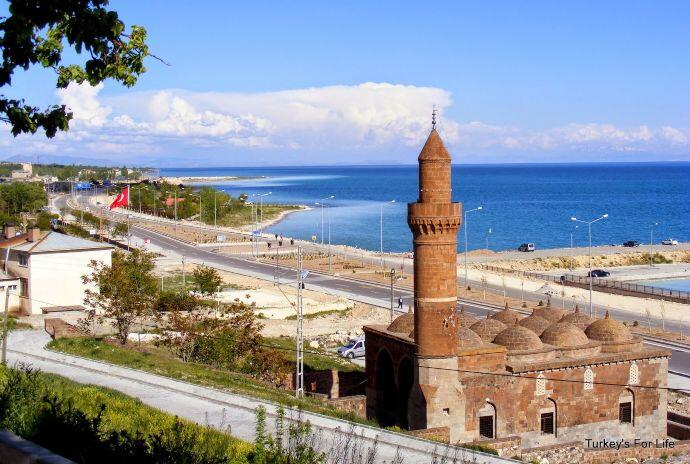 Adilcevaz is a small town that’s famous for its walnuts (‘ceviz’ means ‘walnut’ in Turkish) and it’s also well known for being the home of this centuries-old mosque. These days, it sits below road level and is separated from the lake shore by the road you can see in the photo.

As for its history, well that’s a bit vague. Tuğrul Bey Camii was built in the 16th century, and the story goes that Mimar Sinan (he of Istanbul’s Süleymaniye Camii fame) was its architect.

This has since been disputed and that makes sense to us, because, as we stood on the road above, looking over the top of the mosque and out onto the lake, you can see the domes are different sizes and not uniform. As our friend said, “Well, if it was Mimar Sinan who built this mosque, he must have been in a rush.” 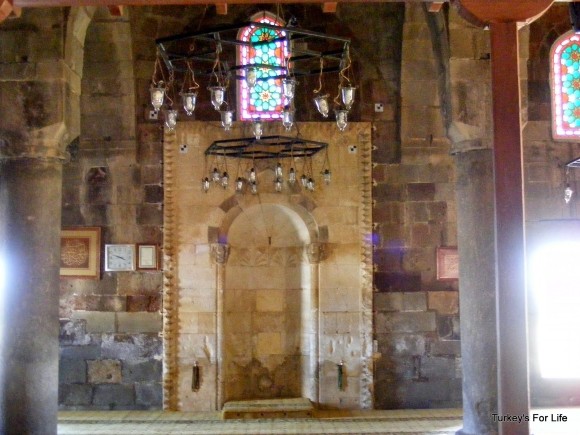 But, for this post at least, the history of Tuğrul Bey Camii isn’t important. We’re telling you about our Patnos to Tatvan road trip. The doors to the mosque are wide open and we peer inside – carefully. It’s just as well because there’s a guy praying alone inside.

We back off and wait around, taking photos of the outside while we wait for him to finish. And, when he leaves, we’re the only people there. Nobody watching over the place, no collection tray for leaving coins after your visit. Nothing. Just a centuries old mosque with its doors wide open.

We take our shoes off and go inside. There’s a feeling of are-we-supposed-to-be-here, but also that feeling of privilege that we’re in a mosque, a mosque that’s hundreds of years old…and we’re on the shores of Van Gölü; that lake that we’ve dreamed of seeing for so many years.

Tuğrul Bey Camii isn’t a big place and it hasn’t got any of the intricate paintwork you’ll see in Istanbul mosques such as Süleymaniye or Küçük Aya Sofya.

But that doesn’t make it any less fascinating. We’ve got original stonework, a simple wooden minbar almost hidden in the darkness – because the only light is the natural sunlight streaming through the windows.

Who worships in this mosque? We have no idea. It’s obviously in use but maybe not on a regular basis. Because, on the road just above Tuğrulbey Camii is Ulu Camii. It’s from outside this mosque that we get the views seen in the top photo.

Ulu Camii is apparently a 13th century mosque. It’s got a new glass addition at the entrance but, unfortunately, we can’t go inside. 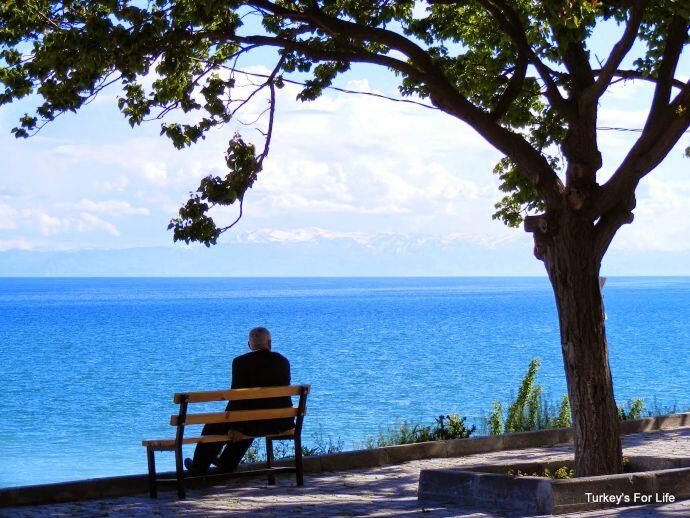 Looking out across Lake Van from Ulu Camii

There’s a sizable group of men milling around outside and we realise we’ve come at prayer time. They’re waiting for the call to prayer before they enter the mosque and, just as we’re wondering if it’s appropriate that we’re hovering around, we get a big smiling “Hoş geldiniz,” (welcome) from some of the men.

Whether it’s appropriate we’re there or not, foreign tourists are obviously not commonplace around these parts. As we enjoy the novelty of centuries old architecture and the mesmerising views across Van Gölü, those waiting to enter the mosque, in turn, enjoy the fact that we’ve bothered to visit there, at all.

Not that this guy on the bench was much interested in our presence. Well, why would you be when this is your view?

. . your experience mirrors ours of visiting mosques of all sizes, shapes and ages. Always the welcome and the pride and delight that we were interested enough to visit.

I hope this won't change, Alan.

Yeah, seen some of your photos of the various mosques you've wondered into. :) Definitely lovely to be welcomed like that.