We’re taking you on an East Turkey road trip from Patnos, Ağrı and back to Patnos again, over three days and two nights. It’s around 500 miles in total with not a motorway in sight (nice!) and this is the trip we made in May 2013 with friends.

So, the map below is the route we took.  You can zoom in and move it around etc if you like – it’s just an embedded Google map – and you’ll notice there’s no circular route back to Patnos.

That’s because, if you remember our post about driving tips for an East Turkey road trip, we told you we ended up on a mountain road and, to be honest, after turning back and spending a second night away because we were too tired to continue driving, we really can’t remember which route we took back to Patnos.

We remember the discussion, just not the decision.

Right, so where are we off to on this not so little jaunt?

Our starting point. We’ve already written about all the fabulous meaty Patnos food we ate and mentioned that, although it’s not a tourist area, it’s actually a pretty decent base from which to travel around. This was where we stayed and you can see from the map why it’s a good base. That blue blob is none other than Lake Van!

After a drive along the northwest shore of Van Gölü, via Erciş, first stop is Muradiye Waterfalls. Brown tourism signposts, although in existence, are not prolific around these parts – and new side roads are popping up all over the place, so even though our friends have been here before, it takes a quick chat with some road workers to point us in the right direction.

Driving along the coast of Lake Van and seeing İshak Paşa Sarayı all in one day. Almost too much for a brain to take in. Two ambitions we dared to hope would be fulfilled in this visit to the east of Turkey and an unexpected road trip has realised both of them in the space of a few hours.

Doğubeyazıt was where we learned about, and ate, Doğubeyazıt Köftesi and İshak Paşa Sarayı has been a we-have-GOT-to-go-there place since we saw it, lonely and distant in the snow, in the brilliant Nuri Bilge Ceylan Turkish film, İklimler. 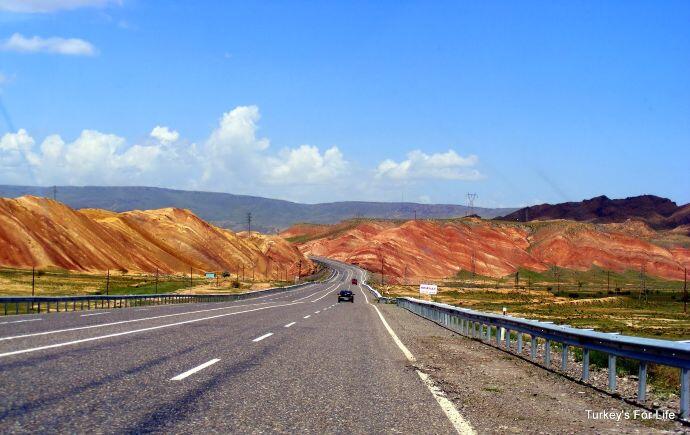 Iğdır is going to be the place where we rest for the night. An interesting place as it has close ties with Azerbaijan (lots of the car number plates are Azerbaijani) and, even when we’ve been driving along the flat for miles and miles, we’ve still been on plateaus close to 3,000 metres in height.

Iğdır sits in a bowl – it’s an almost Mediterranean temperature oasis in a land of long harsh winters and very short summers. More about Iğdır when we get there…

Were we even supposed to be there? Are visitors invited? It didn’t look that way – but we went anyway. A friendly policeman who had just impounded our car highly recommended we drive onwards to see the Tuzluca Salt Mines (once we’d un-impounded the car, of course) and we’re grateful for that – we saw a salt mine in action, and it all felt a bit James Bond. Actually, let’s say we shouldn’t have been there; we wandered into a place of work…but no one said anything to us; what are you gonna do?

The main reason for us straying so far northwards was to visit the ruins at Ani, slightly west of the city of Kars. Ani has been a long time ambition, too – and one we had decided would have to be for another visit to the east. It’s too far from Patnos we thought…but then we didn’t know we were doing a road trip. Wow, bonus and a half! A ridiculous amount of photos from there.

(2017 Update: We were really pleased to see Ani make it onto the UNESCO list of World Heritage Sites in Turkey.)

Hmm, wish we could remember our route. It involved a rather unnerving mountain climb, back down the mountain again, another (unintended) night in Iğdır and then a drive back to Patnos in the morning.

This road trip has definitely been one of the highlights of our time in Turkey. Highly recommended!

I would love to visit east Turkey....I know some places of interest I would like to see...but my Turkish husband won't go anywhere near there.:-(

A shame as the east is so beautiful. Maybe you could find another travel companion. :)

Brilliant post - so much to discover at Eastern Turkey; look forward to more of these!:)

Looking forward to doing the posts about our trip. :)

A friend of mine just returned from a road trip through Turkey AND she wrote about it today, just like you. :-) So now I'm all inspired to follow my dream of driving through Turkey like you two adventurers. :-)

Oh, by all means tell us who wrote about it. Would love to read about other people's travels through Turkey. :)

I envy you - My Turkish husband won't ever consider such a trip - I'll have to find alternative travelling companions.

Aww, in that case, hope you can find yourself a travel companion so you don't miss out.