And close your eyes…and take a biiiig, deep breath, taking in that lovely breath of the proverbial fresh air that makes you feel life is good. Because we all need a breath of fresh air from time to time…and a little corner of Fethiye just got one – well, we think so, anyway. Here’s a big welcome to Baba Fırın! 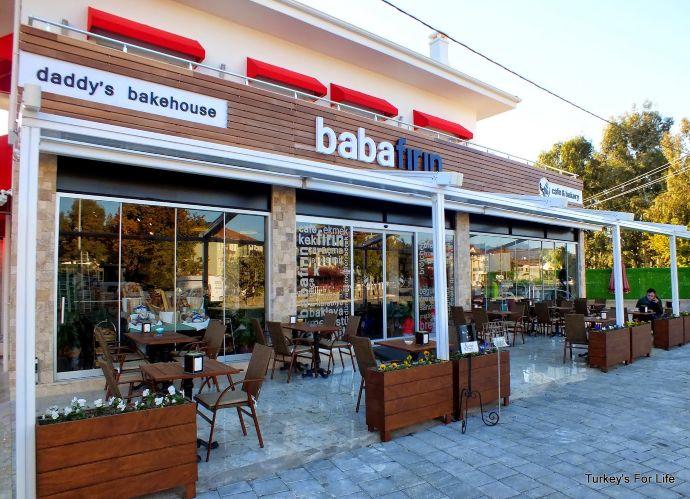 Baba Fırın is a bakery and cafe rolled into one

This is Baba Fırın – Daddy’s Bakehouse – and, when all is stripped right back to basics, it’s a cafe and bakery. It bakes bread; as do thousands of other bakeries in Turkey. Turkey and bread – they go together. Bread has an important place in Turkish culture and we couldn’t even hazard a guess as to how many bakeries there are just in Fethiye (we love and cherish our local bakery, as you know).

So what’s so different about Baba Fırın (aka Daddy’s Bakehouse), then? Hmm, well, lots. It’s a breath of fresh air because they’ve somehow managed to make a concept out of baking bread. They even have a tagline, ‘ekmeğe saygı’ (respect for bread). We’re already sold with that one, but they live up to it, too.

There’s all sorts of different breads in this place; baguettes, Italian-style ciabatta, little rounded baps topped with various seeds; sunflower and poppy seeds (great for making köfte burgers). There’s Easter bread, croissants…it’s all just a bit different. And lots of it is baked on site so the whole building has that warm, bready welcoming aroma wafting around when you walk through the door. 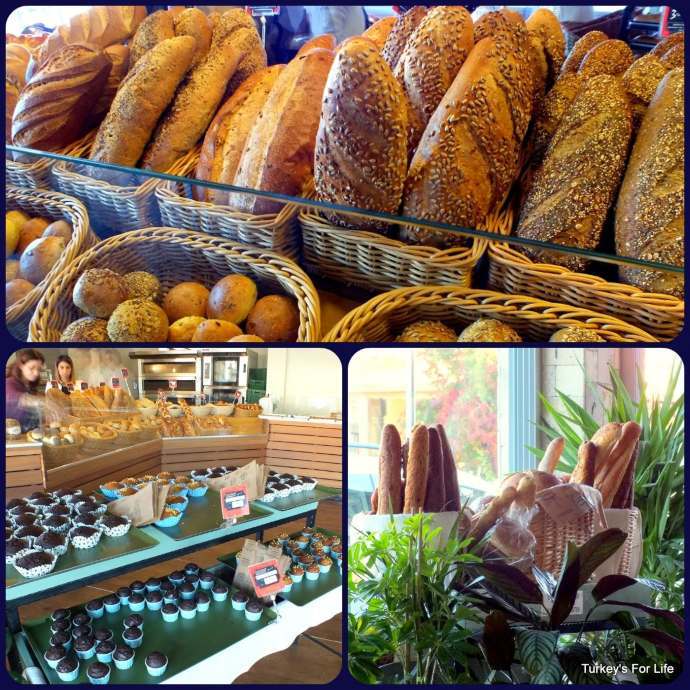 Baba Fırın isn’t even in our neighbourhood, but we still had to visit – the power of Facebook, you see. We know one of the guys there and he shared their Facebook page before the place even opened. Lots of local publicity and online publicity (Facebook photos of visitors such as Fethiye’s Mayor and the Fethiyespor football team won’t have done them any harm) – they hit the ground running.

And since we liked their page, almost every morning when I open my Facebook, there’s a photo; usually a tray of freshly-baked bread coming out of the oven or some new type of bread they’re now making or selling. If you’re bread-lovers like us, you’ll know what that does. Ahhh, temptation…Really must visit Baba Fırın…

And Baba Fırın is a cafe, too. We’ve fully intended to go there and try it out, but you know us, by now. We’re a bit rubbish at getting round to going to places we really want to go to. Baba Fırın is only few doors away from Cafe Pazar and we’ve been in Cafe Pazar numerous times since the bakery opened. The intention has always been to wander along the road for a little nosey…but time just seems to disappear.

But it was the doughnuts that did it. Facebook again! There, on a photo, a tray with lots of little plump rounded doughnuts. “We’re now serving doughnuts.” Oh my life, how long was it since we’d seen a doughnut? “Barry, they’re doing doughnuts. We need to go to Baba Fırın cafe and eat a doughnut.” 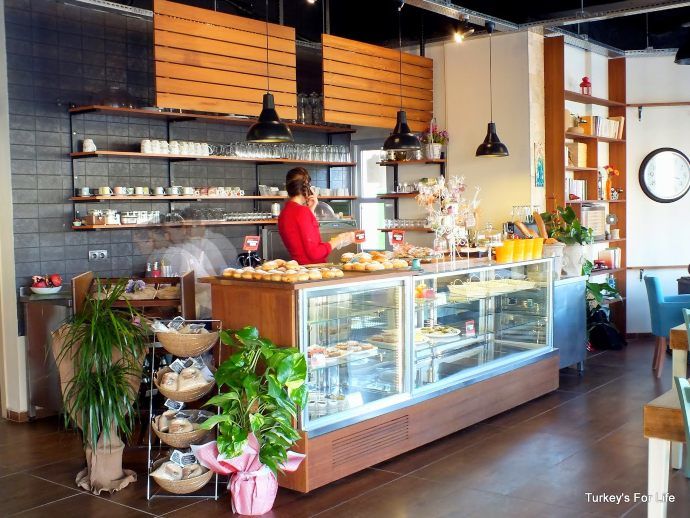 Doughnuts on the counter at Baba Fırın

Again, not much of a sweet tooth in our household (aside from the odd slice of revani or bowl of creamy sütlaç, of course) so quite where this doughnut urge came from, I’m not sure. Maybe because it’s so many years since we’ve even set eyes on one.

So we took action! Baba Fırın – Daddy’s Bakehouse would be a nice place to take Barry’s mum. She’s not much into the types of bars we like (hardly surprising) but she’d like this, we were sure. A civilised afternoon of doughnut and coffee – can’t go wrong.

And we all walked in, and there were the doughnuts on the counter; the doughnuts I was craving. Lots of people were buying them and a new tray arrived to top up what was fast disappearing… 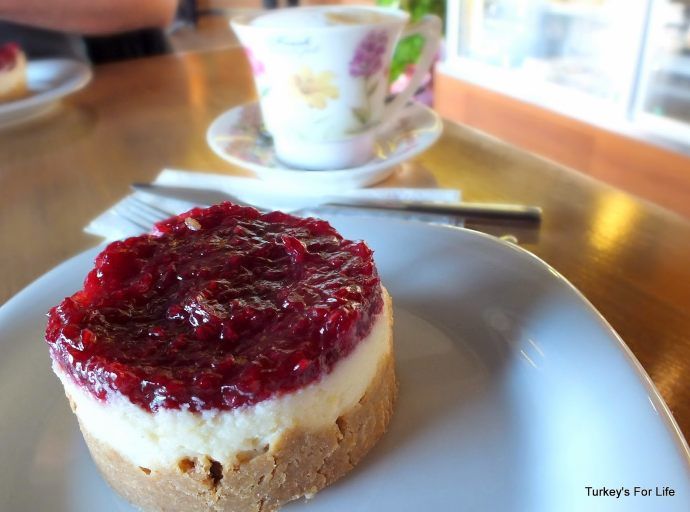 Cheesecake and cappuccino at Baba Fırın

Yes, we know! Don’t ask. We are fully aware that what you see before you is not a doughnut at all…but an individual raspberry cheesecake.

All three of us went to the Baba Fırın cafe for doughnuts and coffee, and all three of us ordered raspberry cheesecake and coffee. Absolutely no idea why. They were just there; three cheesecakes looking at us from behind the glass of the display counter.

Anyway, it all got the thumbs up from us. It’s a pleasant atmosphere in there.

And it’s that sort of place. The decor, the atmosphere; it all just feels a bit different, which is why it’s such a breath of fresh air, especially for this little corner of Fethiye. It’s the sort of place where you can come and sit on a weekend morning to read the paper (and play on your phone and tablet, of course) while you have a drink or a bit of breakfast.

Cafe on one side of the room – and people were indeed playing on tablets over a leisurely brew – and bakery on the other. Pleasantly busy, lots of comings and goings, we really liked it.

And of course, we didn’t leave without getting bread, too – various types! We’ll be back soon because that doughnut craving is yet to be satisfied…

Yes, just before we tell you about the menu at Baba Fırın – Daddy’s Bakehouse, we’ll tell you that, since the original post, we did indeed satisfy the doughnut craving on more than one occasion.

We’re also quite partial to the Baba Fırın tam tahıllı (wholegrain) simit and su böreği as part of a luxury weekend breakfast at home. 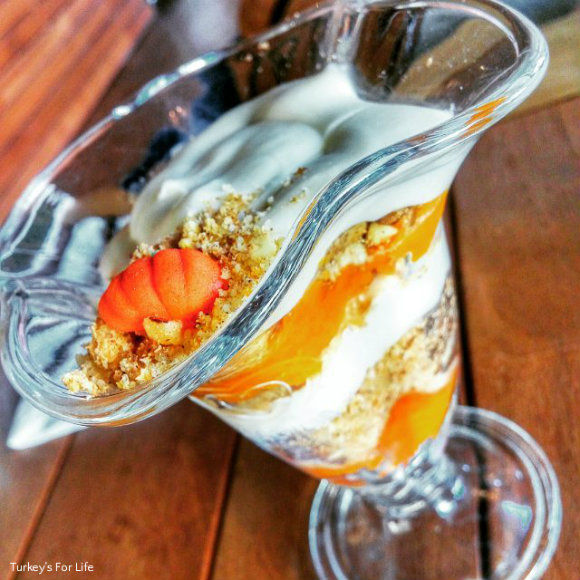 Pumpkin Cup or Balkabağı Kup – tastes great in both languages

For the sweet tooth, there’s still lots to get those taste buds tempted. Chocolate eclairs and desserts such as the pumpin cup above. But, if you want to go to Baba Fırın for lunch, there are now also savoury snacks on the menu.

If you’re fancying a bit of breakfast, they’ve now got traditional goodies such as sucuklu yumurta (fried eggs with slices of Turkish sucuk sausage) and the old classic, menemen. And there’s more substantial snacks, too – these are the ones that tempted us back there. 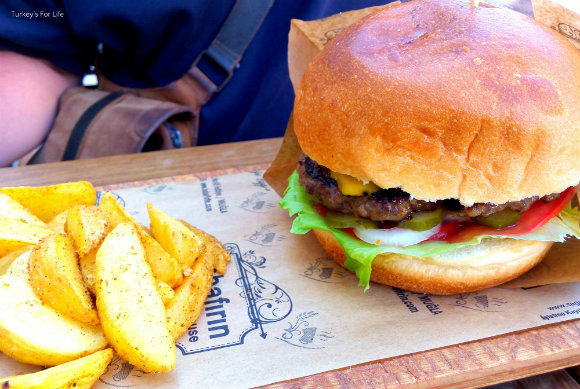 Of course, Baba Fırın had posted a yummy-looking, staged photo of their new burgers on one of their social media pages; lid resting against the cheese-topped beef. We wanted that burger! Barry ordered it and then I decided to have something different so we could share and sample.

In years gone by, good homemade burgers were hard to come across in the Fethiye area but there’s a few choices now should you get the burger urge.

Baba Fırın can be added to that list. The burger itself is made by a local butcher and the bun, of course, is made at Baba Fırın. If you like substantial and meaty and a few potato wedges on the side, too, you shouldn’t be disappointed with this effort!

And what’s a cafe brunch or lunch without good old Turkish tost! There’s a selection of toasties on the menu with fillings to suit most tastes. This is a kavurmalı tost. Pieces of braised meat with melted cheese.

And what better way to wash down very filling cheeseburgers and toasties on a hot, sunny day? Well, have you ever tried limonata; homemade, traditional Turkish lemonade? We had two each! 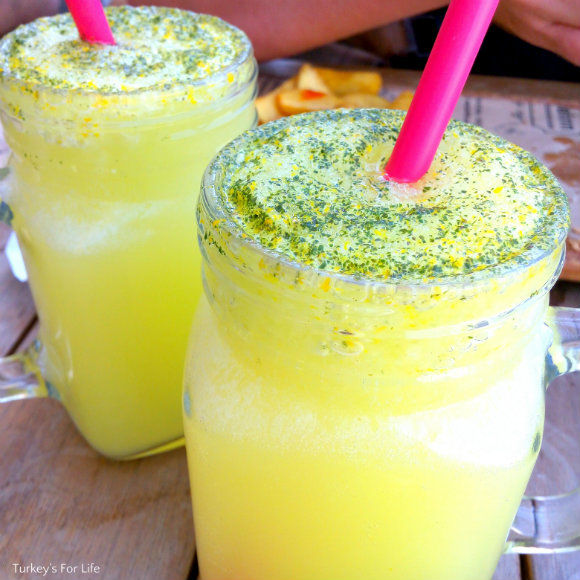 You’ll see limonata advertised on the boards of various cafes and restaurants all around Turkey in the summer months. It’s sooo refreshing. Each cafe – or even home – will have their own slight variations of the recipe, and, no doubt, some people have their own little secret ingredients, too.

Both branches of Baba Fırın serve limonata – they have a branch in Göcek, too; a mix of fresh lemon juice, water, a bit of sugar, a sprinkling of mint, lemon & orange zest…and then a good dose of crushed ice, too. The challenge is trying not to glug it all in one go…a challenge we failed, hence the need to order another one!

So, those are just some of the extra goodies that we’ve tried at Baba Fırın. They’re always posting photos on Instagram and we’ve linked to their account below.

As for us, we can’t put every single photo we take on the blog and if we’re in cafes and bars, etc, those pics tend to go on our Instagram account with geotags of where they were taken. Follow us there for more daily eats, drinks and scenes locally and nationally.

You're welcome. We loved the different bread and the atmosphere in the cafe. :)

Ortaca has got some catching up to do! That said, it's amazing and wonderful how even a bit of an outback town like ours has moved on from the basic white loaf in the past few years

Yeah, agreed, we think Ortaca has changed a lot Alan. It's a smart town. We do love the basic white loaves but alternatives in life are always nice. Babafırın can be our alternative from now on. :)