If you read Turkey’s For Life a lot, you’ll know that since January 2014, we’ve been doing little monthly roundups of random news from Fethiye. Not so much news as things we’ve been up to, and little happenings around town that might not otherwise make their own blog post. Anyway, February’s roundup didn’t happen because we took ourselves off to Antalya for my birthday and for Runatolia. As we watched the high heel race (a group of women pelting down the road at breakneck speed in stilettos) the roundup of Fethiye occurrences completely slipped our minds. Understandable.

Anyway, we haven’t forgotten about the March Fethiye roundup – it’s just that we didn’t realise the end of March was quite so close…so, now, here it is on April 3rd. Life in Fethiye, you see; days run away with you. Anyway, we’ve got a couple of months to contend with so let’s get going.

There’s always something to wonder about when it comes to eating out in Fethiye – as one place closes for whatever reason, it’s never too long before new people appear to try their hand in their new location.

In the centre of Fethiye, there’s a popular cafe-restaurant called Limon H20, right next to the Migros supermarket. Well now, directly opposite the PTT a Limon H20 lokanta is opening on the site of what was previously the Saray Lokantası. Work has been going on for some time and it’s only recently that the boards have gone up to reveal what it’s going to be.

Along Fethiye harbour… ahhh, the goings on along the harbour. In our January 2015 Fethiye round up, we told you of the black mesh covering what we can only assume will be another new eatery. The metalwork is now painted white, cream-coloured faux wood panelling (this matches other buildings along the harbour) has decked the outer walls and the black mesh is still there – just about – so we can’t see too much of what’s going on inside. And then, facing the new marina, Bayramefendi Osmanlı Kahvecisi is already very well established. Next door to it, where Kuzey used to be, a new place is slowly taking shape. We shall wait and see what both of those are going to be…

Oh yeah, and Adanalı Hasan Kolcuoğlü – the kebab restaurant that was on the main road, facing the harbour – well, they’ve shifted themselves across the road to the actual harbour so you can now enjoy your kebabs by the sea. They’ve taken over the empty space that was previously Nayla Restaurant. Phew; got all that?

Wonder which building will be next to go…

Fethiye’s famous teetering constructions are being deconstructed, slowly slowly. We told you about the middle section being the first to go in our January round up. Now, the end section is no more – you can see the digger on top of the rubble – and windows are being removed from other blocks. Wonder how long the whole process is going to take…

Teased By The Spring Weather

The blossom on the trees – mimosa blossom photographed in our walk around the Oyuktepe peninsula a couple of weeks back is now in abundance, everywhere – tells us spring is here. Our fast-growing privets tell us spring is here, and it is warming up slowly… 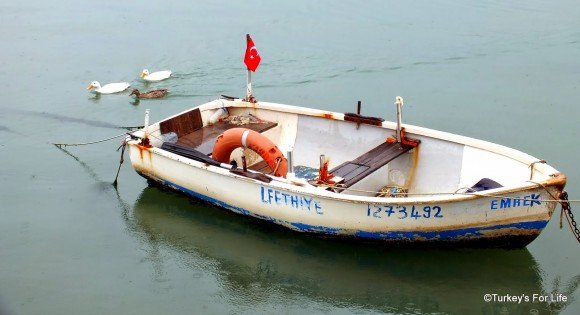 But we’re still getting deluges of rain. Not that the ducks mind of course. And, should the wind pick up, there’s often still a bite to it that reminds us we’re not quite out of the woods just yet. But we are getting there…

Fethiyespor – Can They Hang On In There?

As we hurtle towards the end of the season, Fethiyespor seem to keep falling further down the league and they’re now in top place – of the relegation zone! Since our last update in January, the technical director (manager) has resigned and a new one has arrived. Losses, and teams playing their games in hand midweek of this week, have pushed Fethiyespor further down the table. 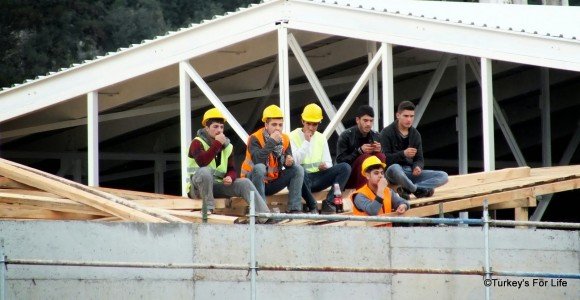 Roofers watch the matches for free – with decent seats, too

After relegation from 1 Lig last season, of course, everyone was hoping – and assuming – Fethiyespor would be in 2 lig for just the one season before being promoted again. We were not supposed to be in this position. On Sunday afternoon at 2:30, Fethiyespor play 6th place, Aydınspor. We’ll be there with lots of hope and crossed fingers for a much needed win!

Yes, businesses have been getting ready throughout March for the beginning of the 2015 summer season. Because Easter is so early this year, there’s already a few tourists in town and they’ll find plenty to do, even if some places are not quite ready yet. We’re looking forward to a ciğer dürüm or a şato piliç – any meal, actually – at Mozaik Bahçe, who have just reopened after a winter break.

If you’re coming to Fethiye in 2015 and want some ideas about Fethiye restaurants and bars, don’t forget we have a Fethiye Eating & Drinking page. And if you need some ideas of things to do in Fethiye, take a look at our Fethiye Must Sees & Dos. For now though, we’ll leave you with the big clue that summer is coming – the Çalış water taxis have been put back in the water!

You've got a new spring wardrobe. Love it!

Thanks a lot, Jack. It's been a lot of deliberating and work but we love it and are looking forward to learning lots of new things. :)