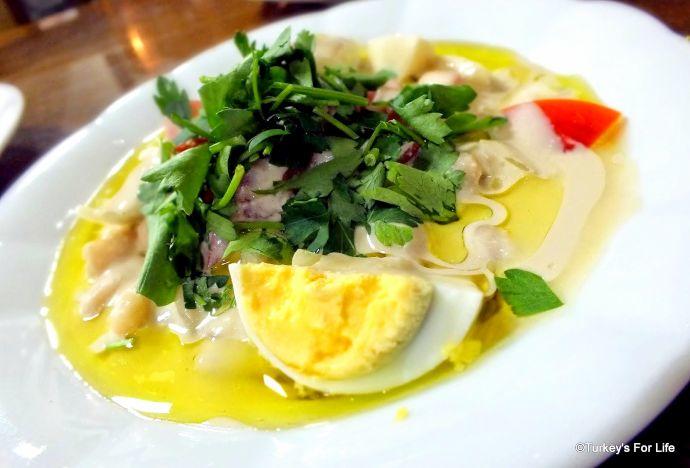 There are many cities and regions in Turkey that are famous for particular recipes or foods – and Antalya is no exception to the case.

On so many occasions on this blog, we’ve written about our love of köfte; yeah, you know we love our köfte – we’ve done various köfte recipes in the past such as Tekirdağ Köftesi – and just a good old basic köfte.

And, on so many occasions on this blog, we’ve told you about our favourite accompaniment to köfte; piyaz.

In Eskişehir, we found ourselves a köfteci in Odunpazarı and had a most memorable lunch of köfte and piyaz at Köfteci Ahmet.

We just love the version of piyaz that is so special to Antalya – that mix of oil and tahini that is generously ladled over the top of the white beans and hard boiled eggs.

But, well, everything in moderation, as they say…and we’re not arguing. When we go to the Antalya area, we want köfte and piyaz!

So, on arrival in Antalya last week, we were craving some good quality köfte and Antalya piyaz..

But, in the past, when we’ve visited the city centre, we’ve struggled to find any.

Eatery after eatery serving döner kebab and other fast foods. Yeah, we could get köfte, but could we find piyaz?

How can you have a place so famous for a particular dish. But then you can’t find that dish in any eateries in the main part of the city centre?

“You’ve got to go to the outskirts and into the villages, too,” said a city centre waiter to us a few years ago.

“But why? Why can’t we get it here in the city centre?”

On that occasion, the waiter did actually take pity on us (and wanted our custom, too, of course).

He took our köfte order and then phoned someone to bring us some Antalya piyaz to go with it.

Great service and yummy piyaz, too.

No idea where he got it from but he insisted it was very good piyaz, just like his wife makes.

It’s all about the consistency and ratio of oil to tahini, he said.

…but there is a point to why I’ve gone back a few years to tell that story. You see, from this previous experience, and more experiences besides, we weren’t holding out much hope of finding Antalya piyaz in the city centre on our first night there.

But things are changing, and, mercifully, some restaurants are now advertising piyaz on their menus outside.

It’s not everywhere, and you’ve got to keep your eyes peeled – but it is there. Wonderful!

And then, obviously, there are those places that completely escape your attention. We did indeed find piyaz on our first night in Antalya city centre last week…in a köfte place that has been in business since 1885!

We stopped at one place and asked the guy outside if they had piyaz (which they were advertising).

“No, but they do it across the way,” he said, and pointed to Topçu Kebap. Hmm, clearly the business hasn’t been in this location since 1885 (the building block is only decades old) but it’s been here for a good while.

Very well established – and it took Barry and Julia until 2015 to find it.

Yeah, well we got there in the end. And now, if you’re köfte & piyaz fans like we are, and you’re in downtown Antalya, you’ll know where to go, too.

All very simple and no need to peruse the menu.

We were here for that Topçu şiş köfte and piyaz, so that’s what we ordered.

So ‘no nonsense’ and so blissful, especially when you’ve had a drive of a few hours and a bit of an issue parking your car (that’s another tale).

You can see in the photo further above that this köfte is not bouncy or compacted in any way. Delightful!

And then there’s the piyaz…

Remember what’s written above about calories? Well, now you can see what we mean, can’t you?

This is a bowl, not a plate.

White beans in glistening olive oil and a tahini sauce…that’s probably also been thinned down with olive oil, too.

Ohhh, but it is so good! Just ask anyone from anywhere in the Antalya region about piyaz and watch their face. They love their piyaz.

Our recipe for Antalya Usulü Piyaz doesn’t have nearly this much dressing – I just can’t bring myself to pour all this oil and tahini into a mixture.

But, when you’re in the Antalya region, and in places like Topçu Kebap, and you’ve not made the dish…forget calories or diets or whatever else and delight in the joy and Turkish food bliss that is Antalya piyaz!

Yes, Topçu Kebap is a recent discovery for us, but millions before us have enjoyed their food.