There’s something really satisfying about cooking with edible wild plants – that knowledge of eating something that has just sprung up at the side of the road, in a meadow, a forest or in the mountains. No one planted it or cultivated it; the seed just came to be there, and, as it starts to grow, an edible wild food is born.

If you know your stuff and have a good knowledge of edible weeds and wild plants, you can of course take yourself off foraging and get yourself a nice little feast.

Lots of our Turkish friends do this (that’s how our wild radish leaf salad came about) and occasionally they offer us some of their spoils.

And then there’s us; we’re more than happy to let local people do the foraging for us. We buy our edible wild plants from places like Fethiye market because we like to work on the assumption that those people know far more than we ever will about such matters! 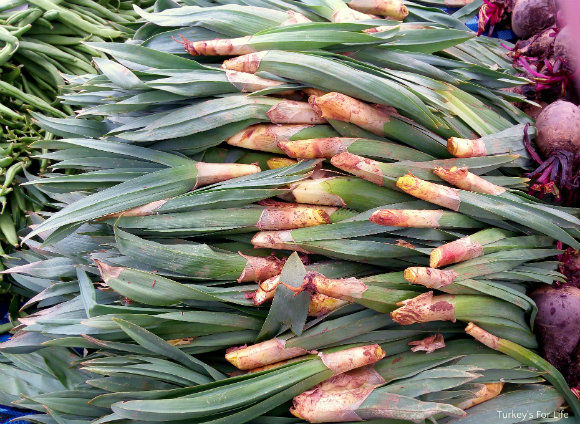 We’ve told you all about çiriş otu before so we’ll not repeat ourselves here, but, by the time we’d spoken to a chef friend about them, last year, it was already too late and the very short çiriş season was over…and so we’ve waited patiently until now to experiment with çiriş recipes.

Depending on how mild or harsh the winter has been in the yayla (the hills and hanging valleys) around Fethiye, the season for çiriş is roughly March or April as the snow starts to melt.

Well, we can see with our own eyes that the snow is melting…so, last Sunday at Çalış market, we kept our eyes peeled for these edible wild plants, determined to cook with them and add to our little portfolio of Turkish dishes. As you can see in the photo above – we spotted some!

A Recipe For Çiriş Otu With Bulgur Wheat

Let’s give it its Turkish name, shall we? Bulgurlu Çiriş Otu Yemeği. Because it seems that when it comes to edible wild plants recipes, us Brits are not too hot on eating these shoots – but in Turkey, there are recipes galore.

And so there should be. It’s a really tasty ingredient and also good for you, too. 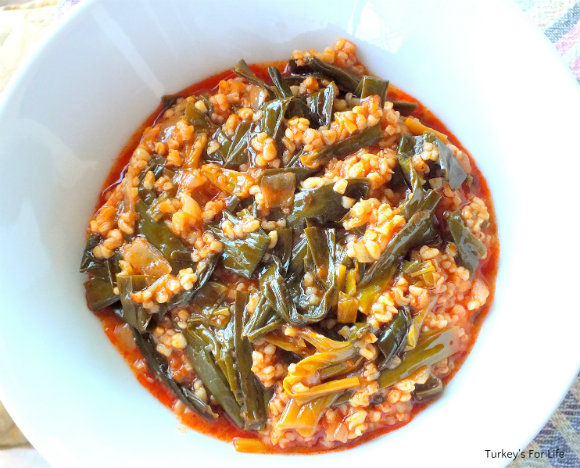 A serving of çiriş cooked with bulgur wheat

We started off with a recipe using bulgur wheat because that’s also a really well-used Turkish ingredient and also a good healthy option. The tomato bulgur pilaf dish is perhaps one of the most famous – but bulgur wheat is also often used to fill out vegetarian dishes like this. 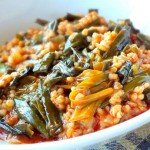 And that’s how we make bulgurlu çiriş otu yemeği; our first ever çiris recipe and our second edible wild plants recipe. This is the sort of wholesome food that you get in lokantas such as Seçkin Restaurant. And you know what they do in places like this, don’t you…well you drizzle a load of natural Turkish yoghurt all over the top of it. Yummy! 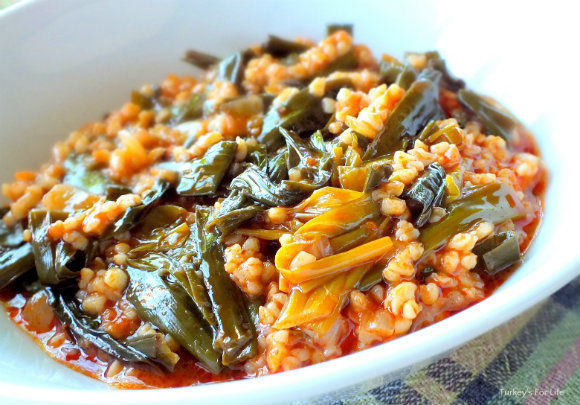 Let your dish get to around room temperature and drizzle the natural yoghurt over. Then you can either eat everything up as it is or you can grill some chicken or barbecue some köfte and use your bulgurlu çiriş otu yemeği as a side serving.

If you’re wondering how on earth you can make this Turkish edible wild plants recipe at home when you can’t get your hands on çiriş, never fear, there are alternatives.

A similar taste and texture is the green ‘leafy’ bit at the top of leeks. You can also use the green stems of spring onion, too.

Hi I reside in Izmir Poligon I purchased some Ciris Otu on 3 -28 -2018 , I learned it is good for many medical uses and is cooked in a variety of way, growing up on a Farm ins Southern USA stayed with me. hope to have feed back ,

Hi, yes there are supposed to be health benefits to çiriş. It has antimicrobial properties which can prevent secondary infections in cancer patients. Çiriş also helps with menstrual flow, too, apparently. Would need to look into it further. :)

Yum! I love Turkish food. I was in food heaven when I visited Istanbul. I wish I found some Çiriş Otu, I would love to try it!

Hi, thanks a lot for your recipe rating, Adonis Villanueva. Much appreciated. :) Çiriş otu has it's own special texture and tasre but people make this dish with spinach for the rest of the year. Hope you get to try this recipe sometime. :)

This looks lovely. I'm sure they are a regional delight, not to be found here in Ankara. Sigh.

Oh, hope you can find them in Ankara, Diane Conti. Perhaps not right in the city centre - ;) - but it's a plant that does grow widely. Good luck.

I love eating wild plants too, but like you I let others do the foraging. Haven't seen Çiriş in our neck of the woods though. Could you describe the taste?

I still haven't seen this green around Bodrum. I'll have to guess what it tastes like.

Wondering if these wild edible plants might not grow in your parts, BacktoBodrum. According to a friend, it only grows in the yayla...although if it's the plant we think it is, we've seen it around flat areas, too. A bit more investigation necessary. :)