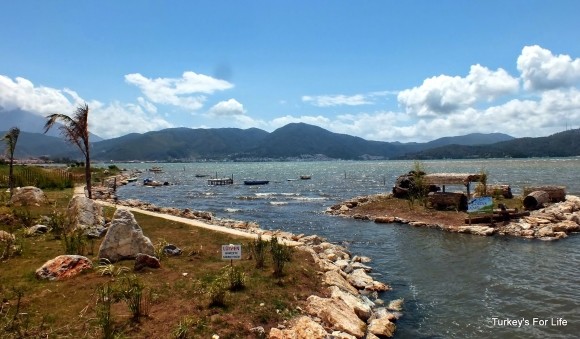 Not news, we know, but a random round-up of all things we notice about what’s going on around Fethiye.

March has been an odd one because we spent a few days of it in Antalya (blog posts yet to come), the warm weather front left us – and more normal, cooler temperatures resumed.

As I type, however, spring is back on track and our faces are ‘sunny’ (read, ‘pink.’)

Anyway, let’s have a little nosey at the month which has just passed in Fethiye…

In our February Fethiye news round up, we mentioned that lots of Günlüklü saplings had been planted along the area in front of the state hospital (Develet Hastanesi).

You can see some of those saplings here, amongst the spring wildflowers. Amazing how a construction site can take on natural beauty, isn’t it?

Anyway, we know Günlüklü trees are pretty nifty when it comes to absorbing water so maybe that’s why there’s so many of them here.

There’s also a little network of canals making themselves visible, like the one in the photo above.

This was previously wetlands area, filled with reeds, just like much of Çalış and surroundings.

So whatever parks and gardens end up here, guess there’s a lot of water control to be done first.

Anyway, we’ll keep you updated because the diggers and dumper trucks are there daily, shifting sludge from one place to the next.

There’ll be method to that shifting…

Well, it’s the usual trials and tribulations – a good win, a bad loss, bla bla, and here we are in 11th position.

No chance of play offs – but very little chance of relegation, too. Treading water.

That’s made for some unhappy people and so the new (returning) coach who returned again, hmmm, well he’s gone again.

We’ve noticed at least one other prominent player by his absence in the last two games, too, so whether he’s gone or not…

Gotta love lower league Turkish football – never got a clue what’s going on. And we do love it. Well, the photo above is just lovely.

We’ve had a couple of midweek games played in the daytime through March.

That means Kale Arkası (the stand behind the goal) is opened up to school kids and they can wander in for free.

Note the older teenage kids across the top row in a long line. Well they don’t want to be seen sitting amongst the younger school kids. Why would they?

Springtime Eating Out In Fethiye

We’ve noticed a pattern over the last few years of writing this blog.

We tend to feel the need to tell you about new places where we’ve eaten throughout winter and early spring.

Guess we’re too busy enjoying summer with friends during the hotter months…grabbing a tost here and there. Or a quick burger or kebab.

Anyway, the warm springtime early March weather (and coveting friends’ food as we passed them on walks along the beach) saw us try out Lighthouse Restaurant.

They’re now doing a great, simple homemade pide, pizza and güveç menu at very reasonable prices and, as you can see in the photo above, we’re not complaining about the pide!

Great to be able to sit along Çalış Beach and enjoy a simple menu containing some classic Turkish food.

Springtime Eating In, In Fethiye – It Was Easter

Yes, for many people, Easter fell in March this year (we know the Orthodox Easter is yet to come) and, as Easter is a bit of an egg celebration, we decided to quit the chocolate variety and share our favourite Turkish recipes which celebrate eggs.

Call it a tenuous link if you like, but well, it’s spring and the markets are packed with village eggs. It works for us.

And March is also strawberry season, so, of course we had to buy some from the pazar.

We used most of them with yoghurt and honey, added some to our muesli recipe. But our purchase also prompted us to update our strawberry sandwich recipe, too.

The appearance of young bakla on the market reminded us to update our recipe for broad beans with Turkish sucuk (spicy beef sausage).

We’re getting there slowly with our recipe updates.

We bought some and made a classic Turkish dish with them so there’s a brand new recipe to come soon.

And don’t worry, there are alternatives to the mystery çiriş so you can still follow the recipe wherever you are.

We’re always in love with markets but there’s just so much going on in springtime – and that meant we just had to create our gigantic guide to the Fethiye Tuesday market.

March 8th was International Women’s Day – and it’s always an event in Fethiye.

This year, Women’s Day was the day that Fethiye’s new memorial was opened, dedicated to a Turkish student, Özgecan Aslan and to other women, too.

Our blog post about it is coming up very soon. We were in Antalya for the opening but we’ve visited since, so we’ll not say too much here.

We did put one photo of the memorial on our Facebook page that we were certain was going to be this month’s most liked photo.

However, on the last day of March, we were in Fethiye town centre, spotted the spring flowers, thought how beautiful the scene looked and snapped a quick photo.

Seems we all agreed that yes, this little part of Fethiye town centre in springtime is more than pleasing to the eye.

If you missed that photo, here it is.

And that just about sums up another month. We’ve got loads to tell you in future blog posts – more Turkish recipes, more places to eat in Fethiye, general goings on, travels past and future.

April is when everywhere starts to wake up for the tourist season, too.

Shops and bars that have been closed for the winter are already starting to open up. There are a few extra people around town.

And, happily, we’ve got a couple of friends who work on gülets; one has already done a tour with guests and the other one sets off tomorrow.

Recent horrific events in Turkey and around the world have put many people off travelling.

Wishing everyone who works in tourism a successful season. Hayırlı Sezonlar!