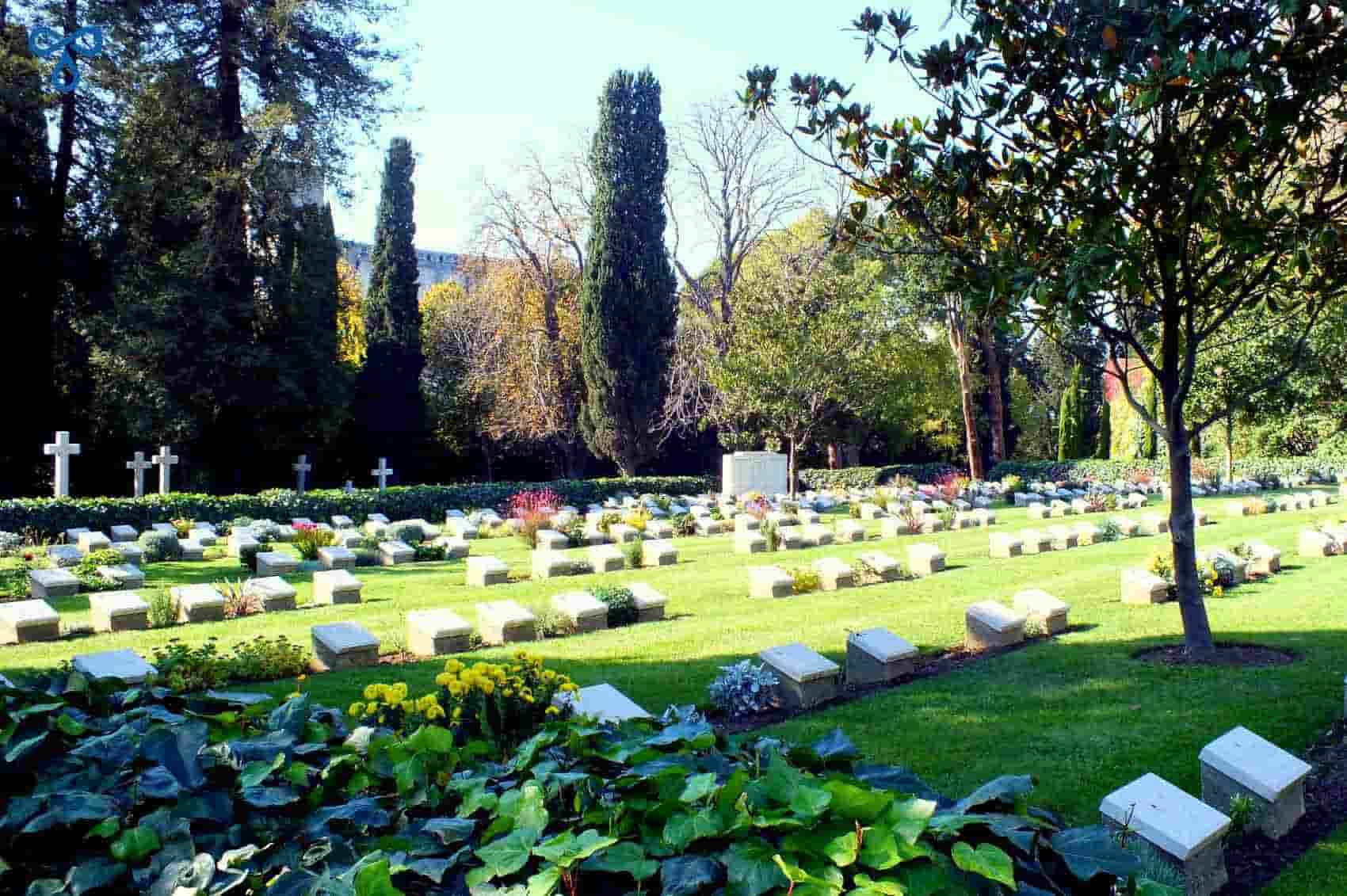 It’s the joy of cities isn’t it? We’d never pretend to be experts on Istanbul but we like to think we have a rough idea of the lay of the land following our numerous visits over the years. But with cities the size of Istanbul, there’s always going to be great little surprises in store. We were both amazed and fascinated to find out that Istanbul was home to Haydarpaşa Cemetery, for example! So what? What’s so special about Haydarpaşa Cemetery?

A bit of context for you. Back in 2012, in Italy, we visited and paid our respects at our first war cemetery; the Polish War Cemetery on Monte Cassino. We’d looked for the Commonwealth cemetery at that time, too, but significant roadworks, new roundabouts and lack of signposts made it impossible to find, even though our friend and driver had been there a few times before.

On our next visit to our friends in Cassino, we made it our mission to go and pay respects and, roadworks now completed, a sombre but peaceful afternoon was spent at Cassino War Cemetery. When we were writing about our Cassino experience for our Remembrance Day blog post in 2015, internet research threw up a Remembrance Day blog post by Leigh Turner who was HM Consul General in Istanbul at the time.

Fascinating. There we were writing about Italy and, at the same time, we find out from this blog post that Istanbul also has a war cemetery. As well as going to pay respects on official commemorations, Haydarpaşa Cemetery was also one of the Consul General’s favourite places in the city to visit just for a bit of quiet time in a city that is not best known for its ‘quiet.’

It’s not impossible to find quiet in Istanbul. Just next to the crowds visiting Topkapı Palace is the peaceful Gülhane Park, for example. It’s just that it’s lovely to go and seek these places out. A quick dart from a busy main road and then there you are; a peaceful oasis in a huge city. We just had to set out to find Haydarpaşa Cemetery. It was a mixture of paying respects and of genuine curiosity.

We jumped on the ferry from Eminönü to Kadıköy – oh, what better way to travel – and then set off on foot, on a mission to find the cemetery. Pavements rammed with students toing and froing and the modern buildings of Kadıköy suddenly became the wonderfully ornate Ottoman buildings that are now home to the multi-campus Marmara University. We’d missed the turning for the cemetery but were more than happy being not-very-majorly lost and photographing this whole new (for us) area of Istanbul.

A couple more attempts at walking up and down the same road and we spotted our turn-off. It didn’t take us long to spot the entrance to Haidar Pasha Cemetery, as it’s called on the plaque. (On the photo above, we’re stood with our backs to the entrance, looking towards the grand Ottoman building and the Anadolu Üsküdar 1908 Spor football pitch.) We walked through the entrance gate towards huge trees, lush greenery, the Bosphrous glinting beyond the port and rail tracks.

What greeted us was not the customary uniform rows of identical military graves but randomly arranged, ornate headstones with dedications inscribed on them from family, friends, fellow servicemen.

Because, you see, Haydarpaşa Cemetery is a bit different. It was here, originally, so that soldiers who lost their lives in the Crimean War (1853-56) could be buried. It was a gift to Britain from the Ottomans and 6,000 servicemen are buried here.

The Crimean War – knowledge of that on our part is pathetically lacking. As a kid, it was always that long ago battle in a far away place where the woman on the back of the £10 note at the time, Florence Nightingale, looked after injured and sick soldiers. Many of them died of cholera and typhoid.

But Haydarpaşa Cemetery is where all of that becomes real and present. Ironic that a place of gravestones is where history comes to life. A huge granite obelisk – the Crimean War Memorial – with an angel on each corner dominates this section of the cemetery. It was erected at the request of Queen Victoria and honours those who lost their lives.

In 1954, the year after the coronation of Queen Elizabeth II, the British community in Istanbul placed a plaque on the obelisk that also honours Florence Nightingale. She tended so many sick and injured soldiers in the military hospital of the nearby Selimiye Barracks and elsewhere. That nice ‘lady of the lamp’ who nursed people in distant times in distant lands was right here, in this area, tending these people. Not so distant, anymore.

The plaque on the Victorian obelisk reads: To Florence Nightingale whose work near this cemetery a century ago relieved much human suffering and laid the foundations for the nursing profession.

This area was an important base for British troops fighting in the Crimean war so Haydarpaşa Cemetery is where those who lost their lives were brought. The cemetery is now maintained by the Commonwealth War Graves Commission but there are also civilian graves in this part of the cemetery as well as an obelisk commemorating German troops who fought alongside the Ottomans and British.

It’s a little window into the lives of the British community and those from other countries who lived and worked here during the Ottoman period. A peek into 19th Century and early 20th century expat life. Civilians who died in the cholera pandemic, including children. British ambassadors to the Ottoman empire, court physicians to the sultan.

For us, a whole new area of British-Ottoman history has revealed itself in Haydarpaşa Cemetery. It’s given us a tangible taster and, for this history-lover at least, a desire to do more research and reading about this period. But now, let’s leave the Crimean War behind us and stroll to the next section of Haydarpaşa Cemetery.

Beautiful, isn’t it? Either side of us, outside the cemetery, there’s a military hospital and the comings and goings of thousands of students. On the Bosphorus side, well, it’s industrial. But here, amongst the lawns and the trees and the walkways, it’s another world. On the day we were there, we were sharing the space with a few gardeners and strolling office workers on their lunch breaks.

Trotsky described war as ‘the locomotive of history,’ (strange, the little nuggets you remember from doing A-Level History a few too many moons ago) and in the short space of time from the Crimean War period to the First World War, certainly much had changed and accelerated. The world was at war and Commonwealth and Ottoman troops were no longer fighting together, but opposite each other.

During the First World War, the Gallipoli campaign and battles around the eastern Mediterranean took many lives. Haydarpaşa Cemetery is the final resting place of soldiers who had become prisoners of war. Troops were present in Istanbul until 1923 and those who lost their lives up to that date are also buried here. British, Australian, New Zealand and (undivided) Indian troops are all commemorated.

Hindu soldiers who were cremated according to Hindu religion are commemorated with this memorial; the Haidar Pasha Cremation Memorial.

The memorial is alongside Muslim graves and the graves of unknown soldiers of the Christian and other faiths. As well as Gallipoli and the eastern Mediterranean, there are also troops commemorated here who fought in Russia and the Caucasus. These soldiers have no known grave or their graves could no longer be maintained. They are all commemorated by the Haidar Pasha Memorial.

Haydarpaşa Cemetery is special because it is the final resting place of soldiers who lost their lives in a huge region. Graves that were previously scattered and that could no longer be maintained have all been brought together, here.

During the Second World War, where Turkey remained neutral, the Turkish people also buried 37 British troops here. These were troops who lost their lives when a naval ship exploded in the area after hitting a mine. The bodies of these troops had washed up on Turkish shores.

And that’s Haydarpaşa Cemetery. A place of melancholy. But also a peaceful place. And a place where history comes alive. It was the first time we had visited here but it won’t be the last…

How To Get To Haydarpaşa Cemetery